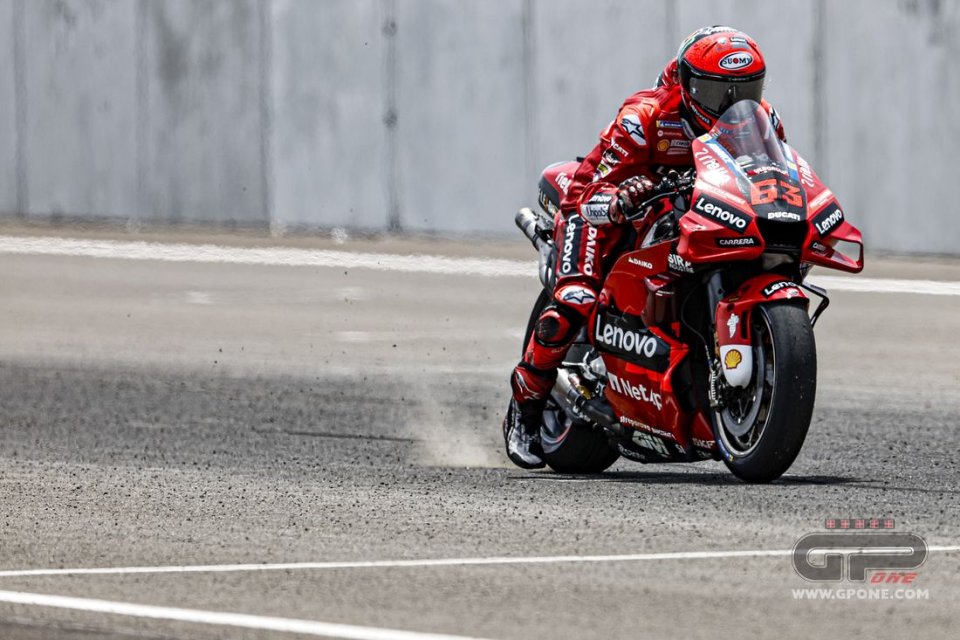 Ducati's strategy for 2022 could already suffer a setback during the second GP of the season, at Mandalika, Indonesia. The GP Commission, in fact, could ban the 'ride height device' from 2023, probably with the combined excuse of reduced performance, safety and costs.

“One reason is that we don't want to further increase the top speed of the bikes. Secondly, we don't want to increase costs because these never-ending technical developments all lead to additional costs”, declared Lin Jarvis to Speedweek.

In reality, the top speed of the bikes in Qatar has not increased and at least two of the three arguments adopted are specious, as Ducati had already declared at Losail.

"So we should remove the carbon brakes, the seamless gearbox and the pneumatic valves, which will never be found even on a production bike and which nevertheless weigh heavily in an operating budget over the course of a season".

Jarvis then continued with the safety aspect, the one through which the wings on the fairing went out of the door and then were allowed to re-enter by the window…

“There is also the matter of rider safety – added Jarvis – Such a system leads to further complications for the riders who have to manage these systems. The layout of the cockpit and the handlebars of MotoGP bikes are already full of levers and buttons, they are scattered at random, so to speak. And does that really make the show better? I doubt it. It's definitely getting more complicated. More things can then go wrong, more devices have to be operated by the riders. For reasons of safety, the reduction of speed and costs, we do not endorse the new device.”

Pit Beirer of KTM also weighed in heavily on the subject.

"There are already eleven buttons in the cockpit for the riders, that's enough. And what's more, the system is operated by a cable pull, which is stone age technology. We prefer to focus on the future and try to start with the 'bio fuel' in 2026 instead of 2027 and to become CO2-neutral.”

At this point in Borgo Panigale they no longer saw reason: "The image of the ‘stone age’ is specious - they retorted - if there are cables, it is because, once again, the MotoGP regulations allow it, while it doesn't allow electronic suspension, which can however be found on motorcycles in regular production in dealerships. If you don't want to invest, you can always go to Superbike. There the costs are much lower there and you start with a production bike that you can buy… ”.

The problem, however, is more serious than it appears. In fact, if the lowering device is banned from 2023, any efforts to fine-tune it this year could be excessive. Ducati has been investing in it for a year already, as revealed by Michele Pirro, but today it is far from perfect.

“It works, but it's not completely consistent yet, and that's what we're working on - explained Zarco - it currently works perfectly two times out of ten”.

Too little to rely on. In fact, it seems that both Bagnaia and Miller have given up on it, but this means that Dall’Igna has spent time and money unnecessarily. And as he told us in Losail: "while we invested in this legitimate system, our opponents may have studied something else, so the regret is double: it is they who have benefitted unfairly".