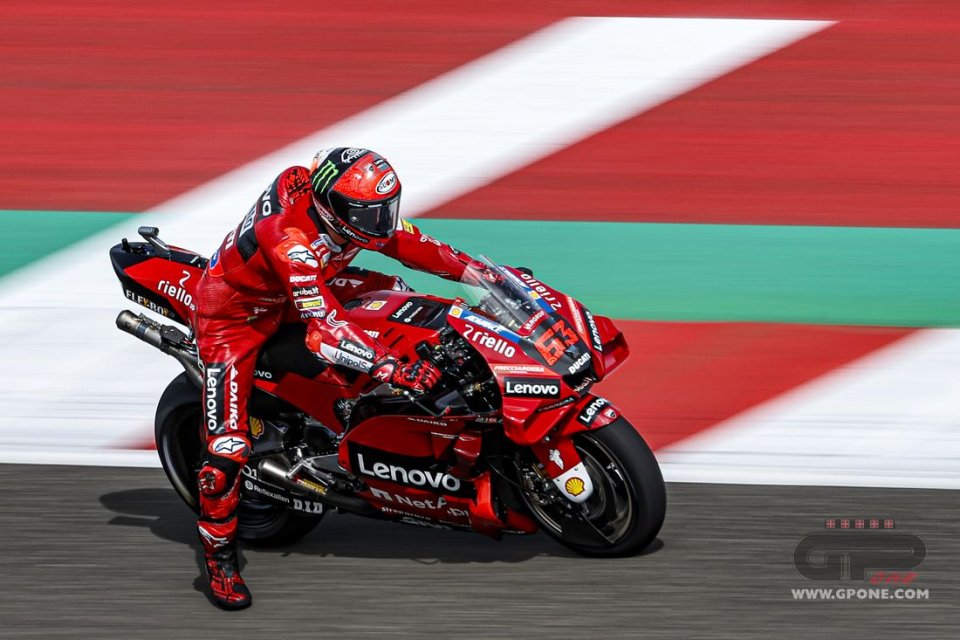 Serenity seems to have dawned on Ducati. At the end of the first day of free practice at Mandalika there are four red bikes in the first six places of the standings (monopolized by the Yamahas) and Bagnaia's is only missing because he wasn’t able to even do a time attack due to the yellow flags displayed earlier for the crash by Marquez and then for that by Bastianini.

Qatar's problems seem to have been solved on the GP22 and perhaps due to one less component, the front lowering device to be used during the lap against which the other manufacturers have expressed their opposition. When it comes to the subject, the two factory riders dodged the questions. "I’m not commenting, we are doing tests" Miller replied. You don't get much more from Pecco: “I don't want to go into details, we have chosen the best solution for us and we will continue like this”. And when it is pointed out that Martin is using the device on one bike and not on the other, he adds: "Jorge was fast, if he finds something positive we will follow his path".

Best to ask about his form on Friday, when he was promoted despite 21st place in the standings.

"Finally a good day - said Pecco - It's the best day of the year, also including the tests. We’ve done a really good job today. I'm very happy with my feeling on the bike. We were just a bit unlucky. I found the yellow flags for Marc and Bastianini so I didn't do a time attack, but my pace with the medium tyre was very strong.”

Was there anything negative?

"Compared to the test and also Qatar on day one and day two I feel so much better on the bike. I can brake, I can be constant and my feeling with the front is back. I also like the new tyres that Michelin brought here because they are more stable for me. I didn't touch anything on the bike, it was the first time this year that with used tyres I was in the top three.”

Are you back to what you were at the end of last year?

"Since FP4 in Qatar we didn't touch anything on the bike. I'm just adapting to the bike, like I was doing in the second part of last season. It's an automatic thing that I need to have again because, like I said in Qatar, touching too much on the bike put me in a situation where I was trying to adapt to different situations. So it was not easy. My feeling is back with the front, I can brake like last year, I can enter the corner like last year, I can manage the tyre like last year. I was missing certain feelings, now we just need a little luck for tomorrow, the only thing we were missing today ".

Are you referring to the risk of rain?

"If it's wet it will not be easy to go to Q2 directly. But if it's also wet for qualifying, it can be an advantage to pass through Q1 to Q2. I really hope to have the possibility to do just one time attack because I lost this possibility with the two yellow flags today. And I think our potential today was very high.”

What do you think of the new asphalt?

“I don't know if the problem of the stones has been solved because I didn't follow any rider today. As for the new asphalt, it’s fine. In braking it is a bit worse than the old one, perhaps it still needs to be rubberized, but it’s already better on the exit ".