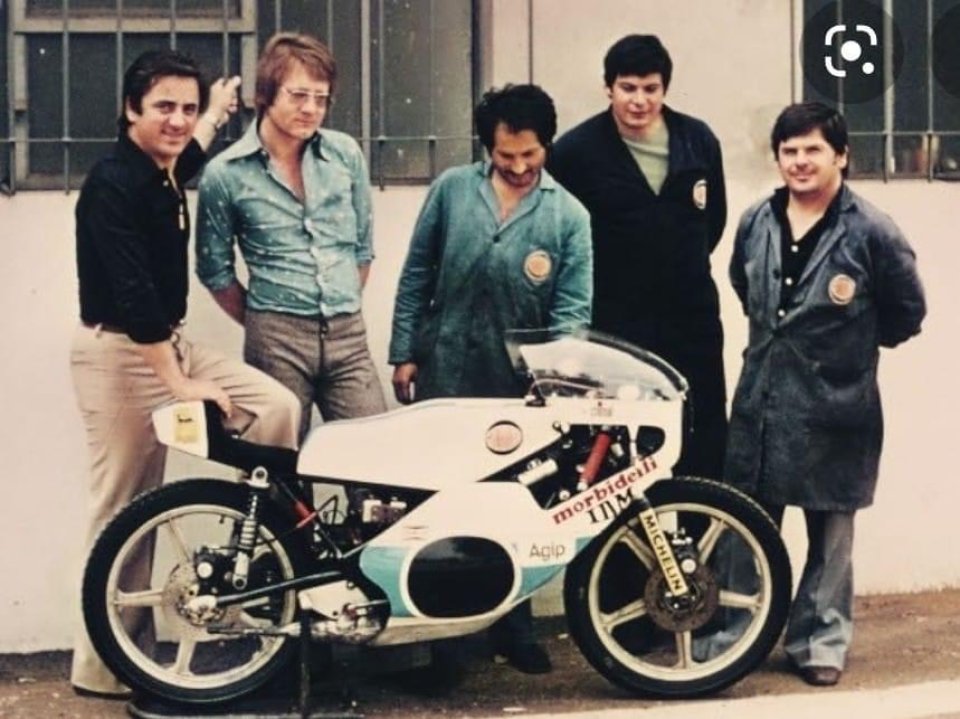 Jörg Möller, written like this, with the umlauts came to pick me up from the editorial office of Motosprint at the end of the ‘70s with his Ferrari Bertone which I considered very ugly, if compared to the sinuous lines of the other Maranello cars. Moreover, it had a strange colour, I remember it was bronze. But it was still a Ferrari. Sitting inside it, for a young journalist, moreover with 'The Genius' at the wheel, was a privilege.

Jörg drove cheerfully, but not recklessly and in any case at that time there were few people who could afford a car like this: he could because he was the engineer behind the successes of the Morbidelli world championships with Bianchi, Pileri and Lega. German, but perfect in his Italian with a heavy Teutonic pronunciation. He was an easy-going guy, we talked about everything with him and on more than one occasion he revealed to me that he had talked several times even with Enzo Ferrari because he had the heart to build a 12-cylinder 2-stroke for the Drake.

He was a perfectionist: he loved coffee, which he ground himself, adjusting the grain according to the temperature and humidity of the air. He said that this was the only way to make perfect coffee. He smelled the air even when the mechanics prepared the mixture and did the carburetion, so important for the engines of the time.

My friend Guenther Wiesinger, of Speedweek, who analytically recalled the many competitive achievements of the engineer, picked up a sentence that he did not say to me but which I believe: "there is so much tar on my lungs that I could asphalt a garden path". It was true, in those politically incorrect years, Jörg smoked at least three packs of unfiltered Gauloises a day.

Jörg Moeller is gone, he was 80 years old, in the vintage photo he is next to Giancarlo Morbidelli and his technicians, Bonaventura (known as 'Talacchio'), Cecchini and Dionigi. He died in his foster home in Pesaro, the city from where he launched Morbidelli into the world championship firmament, created in turn by that other absolute genius, Giancarlo Morbidelli, the owner of the 'Morbidelli woodworking machinery'.

Morbidelli put Möller in charge of his racing department as chief designer in 1974.

Bianchi and Pileri crashed almost immediately, then Pileri climbed up to third place, but at that moment, on their debut, they were leading the race that saw Andersson and Gustafsson win.

Yamaha still won the world championship, but realized that they could no longer do anything against 'the wizard' and pulled out of racing in the eighth of a litre category. Which made Jörg Möller say: “I made a mistake. My Morbidelli engines were 5 hp more powerful than the Yamaha ones. This is how I kicked Yamaha out of the world championship ”.

Möller later also built the 250cc which, in the hands of Graziano Rossi, Valentino's father, took three victories in 1979, then a 350cc and a four-cylinder 500cc GP which was always raced by Rossi and then by the Roman driver Gianni Pelletier, who in a non-championship race at Mugello, beat the official Yamaha 500 of Kenny Roberts.

With Morbidelli Mario Lega won the 250cc world championship in 1977. After Morbidelli's retirement, series racing bikes were produced under the name MBA (Motori Benelli Armi), which won the 125cc world championship with Lazzarini in 1978 and with Bianchi in 1980 and served as winning bikes for many private riders such as Gustav Auinger before these twin-cylinder bikes made way for single-cylinder bikes from Honda, Derbi, Rotax and Aprilia in 1988.

Möller was not only responsible for Pileri's world title (1975) with his twin-cylinder Morbidelli 125cc, but also dominated the world championship with Bianchi in 1976 and 1977.

Möller moved from Morbidelli to Minarelli in Bologna, where he won two titles with Ángel Nieto from 1978 to 1981. Later, he dedicated himself to other projects such as the Parisienne 250, led by Pierre Bolle and Jacques Cornu in the 1980s, for the founder of IRTA Olivier Métraux. In this team he was also responsible for the engines of the Swiss Honda 125 rider Heinz Lüthi. Later he also worked with Eskil Suter.