He'll be 60 in two years, but Jeremy McWilliams still hasn't lost his racing and winning habit, as he raised his last trophy yesterday at the Daytona 200 during the second race of the King of the Baggers, the fascinatingly strange race where motorcycles created for US highways compete on a track … with lots of bags in tow.

Throughout his career, Jezza has practically ridden every bike there is. In 1993, he debuted in the World Championship in the 500 to then move onto the 250 four years later, where he won his only race in Assen in 2001. In the MotoGP, he raced with Kenny Roberts' Proton and Aprilia. In 2014, at almost 50 years of age, he made his last appearance in the World Championship in the Moto2 with the Taylor Made, a very unique prototype that boasted a monocoque carbon fiber frame.

Jeremy also starred in the film, Under the Skin, starring – but, most importantly, riding – alongside Scarlett Johansson.

Yesterday, McWilliams won on his Indian, ahead of teammates O’Hara and Fong  (see race highlights above). 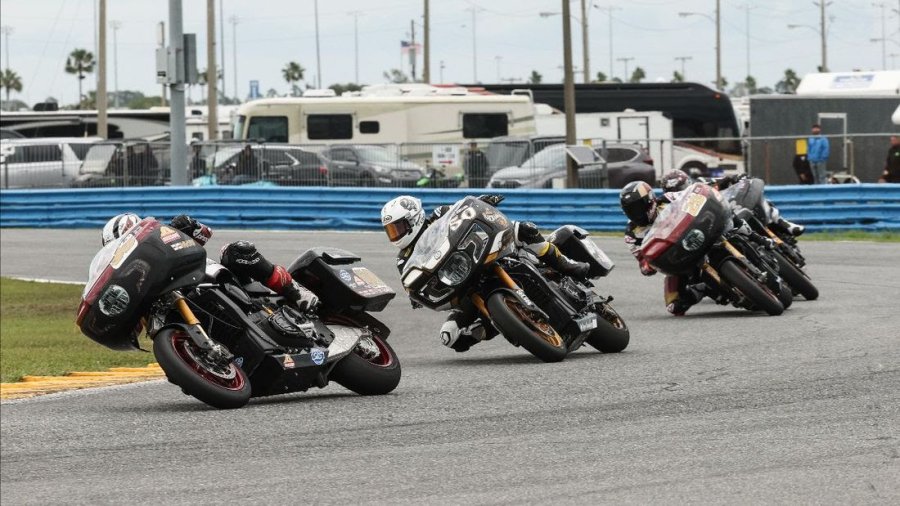 "I kind of learned to ride it off Tyler (O'Hara). Give him all the credit for that because he rides it differently than I do,”  he said. “I came along not knowing and riding it bit like a sport bike, and that's not how it works. It just needs to be nursed a little bit differently. It has so much torque that you’ve got to change your throttle position and stuff. You’ve got learn how to do that because it’s got an incredible amount of go off the bottom. So, you can see me spinning up, and that’s still me  learning. Still not quite there, yet,” he continued. “I probably haven’t been using the rpm range as well as I should be over the whole  weekend. I had the slightly different aero on.  I was short-shifting a little. I didn't learn how to draft, until discussing it with  Tyler, really.”

“It's a very unique racetrack. Very special. And it’s very special just  to be here and standing on top of the box. That’s not really what I expected. I’d be really happy to just get on the podium. I was a bit disappointed coming up short yesterday. Today made it all up for it. It's a great team scenario, where we can all speak openly and try to help each other," he concluded.