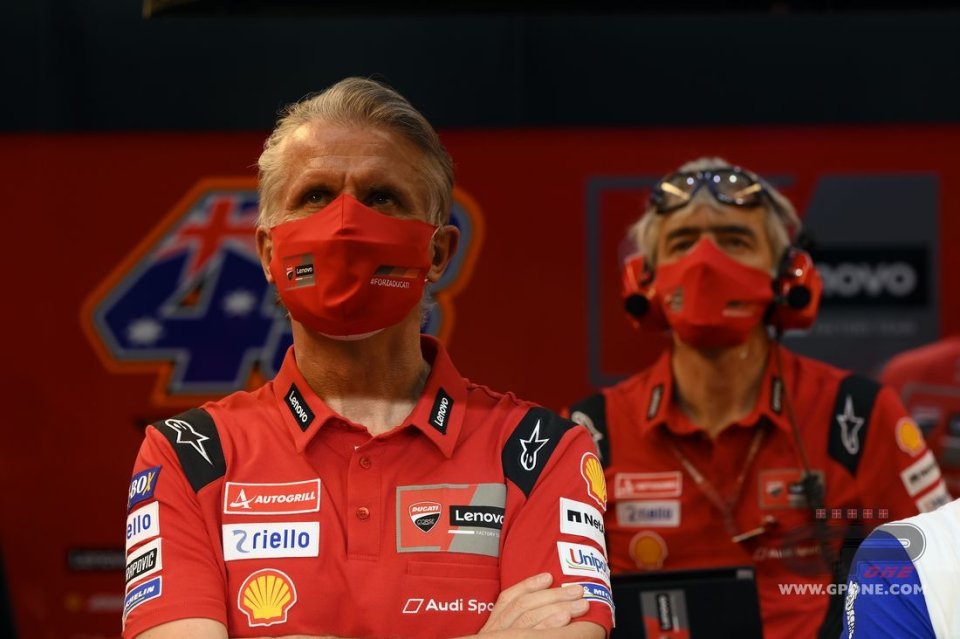 The opening race in Qatar left the Ducati men with mixed feelings. On the one hand there was the joy of Bastianini's victory with Gresini team colours, on the other the disappointment of not even one of the two Desmosedici of the official team reaching the finish line, due to an error by Bagnaia and a glitch for Miller.

More was expected of the GP22 and this was also the case for Paolo Ciabatti, the sporting director of the Red team. With him, however, we started with the good news, that is, Enea’s win.

“I don't think anyone expected it - he admitted - I knew he would have had a good race because ever since he got on the GP21, already at the Jerez tests, he had always been very strong and in the Qatar tests he was one of the riders with the best pace. I was hoping he could get on the podium, he did a fantastic race, exceeding ours, the team’s and his expectations. It was a fully deserved victory because it came not thanks to the misfortunes of others, so hats off for that. Switching to the latest version of the GP21, the bike that won the last 4 out of 6 races last year, was a step forward for Enea and he was able to make the most of it."

“It is a great satisfaction for Enea but above all for the team, knowing all the difficulties that existed last year after Nadia decided to continue with Fausto's project. It wasn’t an easy year for a thousand reasons, starting with the emotional ones and moving on to the practical ones. Together with them we have managed to create a situation that we are fully satisfied with, not only on a sporting level but also on an emotional one ”.

"Some details of the GP22 still need to be sorted, it wasn’t the debut we were hoping for"

The bad news came from the factory team, with neither Bagnaia nor Miller making it to the finish line.

“We had a complicated weekend, scoring zero points is a very negative result for us. Jack had an electronic problem that we cleared up and it won't happen again, but sadly he had to stop. Pecco, who was lapping very fast, made a mistake involving Martin as well. We didn't bring the GP22 to its debut with the results we hoped for, obviously some details still need to be sorted ”.

Were the winter tests not enough?

“Certainly not having been able to lap continuously in stable conditions didn’t help us to fine-tune a number of aspects of the bike that still need to be sorted. At Mandalika we found a very dirty track and then the asphalt was crumbling. Despite Martin's pole position, the performances in Qatar were below our expectations ”.

“We leave the interpretations of others to those who make them. During the few days of testing it emerged that above all Bagnaia but also Miller believed that the engine output was not sufficiently modulated. So they asked, after the Sepang test, if it was possible to revise some characteristics of the engine. We have tried to meet these demands and have brought this sort of 'hybrid' engine, which has some characteristics more similar to those of 2021. That said, the other riders with the 2022 version had given their OK to continue with this engine, which may need to be softened again in its behaviour, that allowed Marini to set the best time on the 2nd day at Mandalika. I think I can say that, as far as Pecco is concerned, the fact that finishing the 2021 season in an exceptional way, with great confidence and with a more progressive type of engine delivery, prompted us to create a hybrid version of the engine that had that feature ".

Bagnaia complained at the end of the race: 'I'm not here to be a test rider but to win', were his words. How did you greet that outburst?

"The GP22 had solutions that were not entirely sorted and it is understandable that a rider, who had not touched the bike from a certain point of view since last year, managing to find exceptional confidence with the whole package, was struggling with some solutions that made him lose a bit of feeling in the first day and a half of testing. I understand his point of view and we have drawn the necessary consequences ”.

Was there an excessive workload for him?

“The work was distributed amongst all the riders of the GP22. In his case, as is has the aim of fighting for the World Championship title, the fact of trying solutions that didn't give him confidence made him nervous."

Will the working method change from the GP of Indonesia?

"It is Dall’Igna who makes certain decisions, but I believe that the will is to meet his needs. We know that the rider’s belief in having the right package goes a long way, sometimes more than technical innovation. "

Did having 8 bikes on the track complicate the development work on the GP22?

“No, there are logistical complications but we already knew them and we have dealt with them. That wasn't the problem ".

Speaking of problems to be addressed, before you even hit the track you had to face the attack of the other manufacturers on the front lowering unit.

“It’s a story that is repeated over and over again and does not give us any pleasure. We think that the reaction of other manufacturers to prohibit a company, which moves within the regulation, an allowed technical solution is not correct. I seem to see a repeat of it with wings in 2016, with the spoon in 2019, with a whole series of innovations that Ducati was the first to introduce. We invented the system to lower the bike at the start and they all copied it, the same with the device that lowers the rear during the race. I believe that the reasons given are spurious”.

Can you be more specific?

“It has been said that it is not a system that cannot be used on stock bikes, I would like to point out that all our competitors use pneumatic valves that will never be used on stock engines and the same goes for carbon brakes. Two solutions that, on the other hand, cost a lot of money, so it seems to me an argument that has no reason to exist, like that of costs. Everyone within the budget they have should be free to make their own choices, both as regards the technological areas in which to invest and to somehow limit the engagement fees of the riders. It seems to me that there are teams that spend a lot of money on their riders, so this makes me smile when it concerns us. We have a budget and we try to use it to have competitive and winning riders and to do the development we need, that's all. Other manufacturers decide to spend more on riders, it is a choice and I do not criticize it and I would like others not to go and look at how Ducati spends its money in racing. Finally, a safety motivation was adduced that I would like to understand on the basis of what… it’s not an object ".

Is it a battle you have given up on or is there still room to win it?

“I hope common sense and a kind of fair play that I don't see in our world from a technical point of view will return. If something is allowed by the regulation, and there are no safety reasons to think about abolishing it, it should be allowed. The position of the manufacturers is clear, five would like to ban it starting from 2023 and one, that is us, would like to keep it. We will have to wait for what the GP Commission will decide, which normally tries to maintain a certain fairness. The championship is owned by the FIM and managed by Dorna, these are the bodies most interested in ensuring that it is as correct as possible both from a technical and a sporting point of view. It will be necessary to see what sort of overview can be found on this issue, unfortunately up to now it has not been possible to reach a common position among the manufacturers, it is a pity but obviously individual interests prevail over the desire to produce a unitary solution. To get it you would have to change their minds, either all the others or Ducati, it's not an easy situation (laughs) ”.