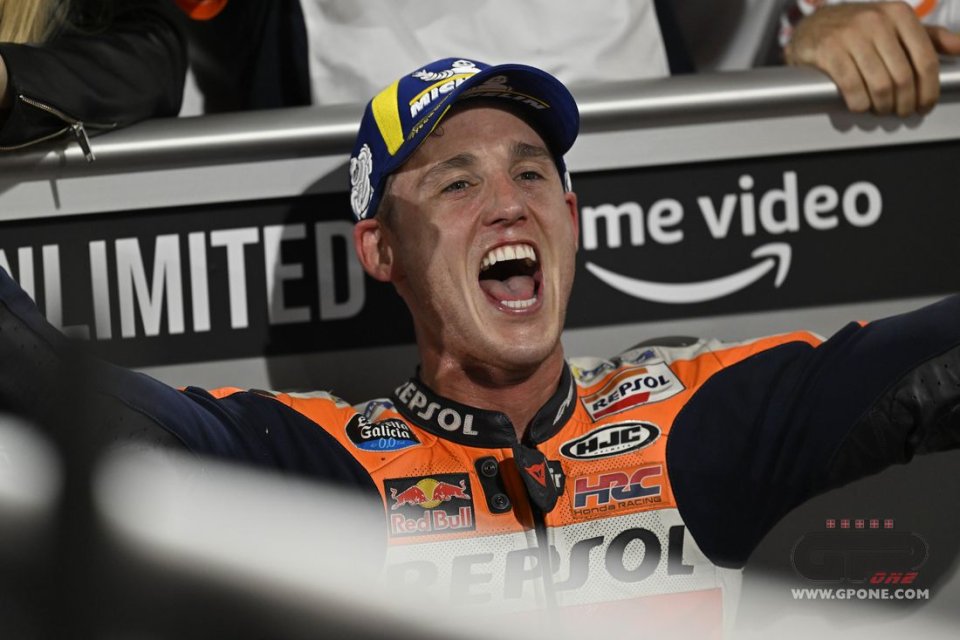 An amazing start to the championship for Honda, especially after a difficult and unexpected last season. Both riders dominated the early stages of the race, with Marquez back in great shape and Pol Espargarò firmly positioning himself at the top, leading the race alone until the last laps, when he was forced to give way to an uncontrollable Enea Bastianini. Pol ended the first race of the season on the third step of the podium, followed by his brother, Aleix, on the Aprilia and Marc fifth.

Was positioning yourself at the top your initial plan? Your start was fantastic and your pace in the first laps was phenomenal.
"Honestly, before the start, we didn’t yet have clear ideas about what would happen,” Pol began. “We analyzed all the variables, the tires, our rivals, in order to understand what chances we had to get on the podium. We expected to finish in the middle group, so we chose to mount both soft tires thinking we could save those and fuel. Instead, something happened that we didn’t expect, and I ended up at the head of the race. In that position, I had nothing left to do but push each variable to its limit, from the tires to the engine, to the fuel. Seven laps before the end, I knew I had given it my all and, when I started to lose grip on the right side of the rear tire, I realized that I couldn’t keep pushing like I had done up to that moment. My riding style relies heavily on the rear brake to get into corners. So, when Enea passed me, and I was hit by his trail, I ended up long. I thought I would end up in the gravel but, luckily, I took control, even though Brad took advantage of it by passing me. Overall, however, I’m very satisfied with this result. Today I not only demonstrated that the bike has improved but also that there are two competitive riders in Honda."

In 2021, Honda went through some difficult times, but starting with the tests in Indonesia, things seem to have improved a lot.
"Yes, we’ve progressed since the tests. The feeling with the bike was very good, but I wanted to be cautious and wait to see the results of the first race. These sixteen points are valuable, and now the next race will be held in Mandalika, a circuit where I’ve always felt good. Now my dream of winning a MotoGP championship is definitely closer."

Is this Honda podium in any way different because it's you and not Marc?
”I’m very grateful to the team and to Honda for all the work they’ve done to give both of us riders a bike that’s no longer so difficult to ride. The fact that I’m here now shows that their work has paid off, and I thank them for this. Now the bike is fast enough to compete for the podium. This is a track in which we usually had problems in the past, with fast curves and grip problems. I’m curious to see what we’ll be able to do on other tracks with better grip, where I’ll be able to ride to the maximum of my abilities with my style of riding with the rear brake."

When you saw your brother Aleix riding his Aprilia get so close to you in the last stages of the race, what did you think?
"I don’t think I had the right weapons at the end of the race to face any kind of duel with anyone (tn. referring to the tires), but it was nice to see him back there. I don't remember the last time two brothers faced each other and came so close to the end of the race. Surely, there will be other occasions during the championship, and I think it will be a good thing."

This was also the first full race this new bike faced. Did you discover something new?
“This bike is completely new. I think we’ll still have many things to discover and work on, both with electronics and on other aspects. This was never our best circuit, and even the choice of tires was still uncertain until the end. We weren’t sure, although I think that the soft compounds proved to be a winning choice after all."

Would you say that this bike in its current setup is the ultimate bike to face the championship?
"Yeah, it's the bike I wanted. It's different from what I expected, but it's the one I needed. Since the beginning of the tests, I’ve never fallen on this bike. Now we can be fast, but riding with the confidence of not having to push ourselves to the limit, and I think this is a great result for Honda. Now we hope to maintain this level in the next races."

As for the choice of tires, you said you weren't sure which compound to use. Was it a motorcycle issue or is it a track issue?
”Racing on this circuit is always special. When we race during the free practice tests, the temperatures on the asphalt are much higher, so it's difficult to have objective data and predict how the bike will behave, because we ride at completely different times when the temperatures drop. I think the choice of the soft was the safest choice. Others made a different choice, but that doesn’t mean that we won’t  be able to do the same in the future. But our choice allowed us to stay in the lead for most of the race and, even if I paid the price in the last stages, I think that being here now was still a great result, so I’d say that the choice of soft proved to be a winning choice after all."

In a recent interview, Marc said that you have to be gentler with this Honda now, while it was the opposite before. What do you think about that?
”Marc has a different riding style. For me, the improvement was there. Now I can ride  more aggressively because the bike is more stable. It has more grip, especially on the rear. Even when the bike shakes, I feel comfortable. I like this bike. It fits my riding style perfectly."

One last question. Was your wife present at your first race of the season today. How much has this counted for your result?
”Her presence filled me with joy. She wanted to be there at the first race. It helped me face the race more calmly. In the past, we've had some difficult moments, so having her here today was really positive. I hope to be able to experience these emotions again in the future with her and our little girl,” the Spanish rider concluded with a smile.

Mir: “The Honda? I don’t expect any revolution, or a perfect bike “