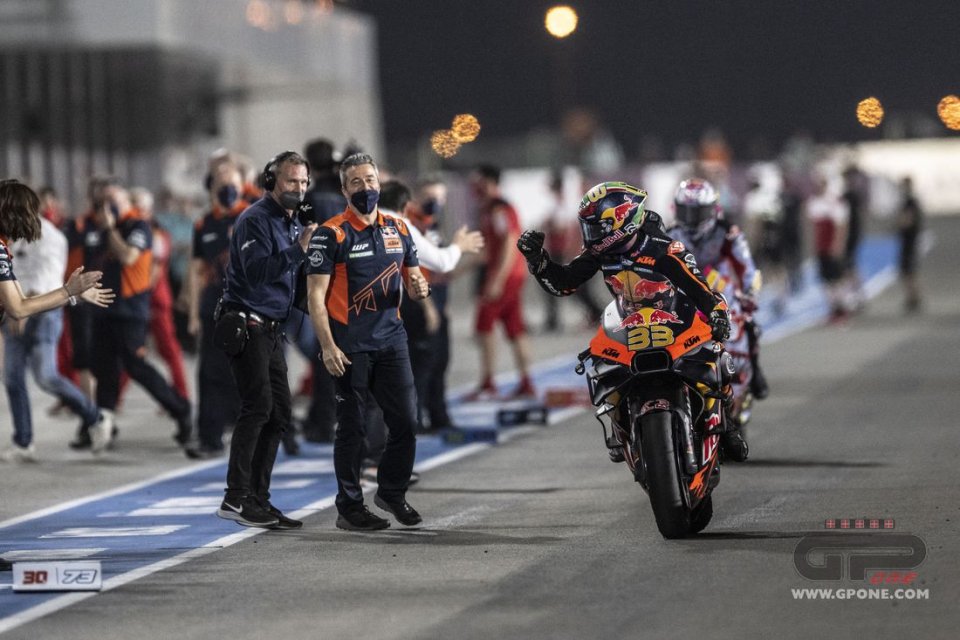 The championship could not have started any better for the official KTM team that, despite Oliveira’s fall,  had Brad Binder close the race on the second step of the podium, taking advantage of Pol Espargarò at the end of his duel with Enea Bastianini. The South African rider debuts in the 2022 championship 20  points, placing him  second in the rankings.

You already had a good pace during free practice, but you  had an extraordinary start today from the third row, which immediately catapulted you to the head of the race.
"Yes, being immediately in third position after the first corner gave me that push and calmness to face the race with clarity,”  Brad said, “making sure I managed the tires that, on this track, are more fundamental than in others, especially with regard to the rear. There were times when I thought I didn't have enough to keep up with the others, but I tried to keep up by staying steady, pushing the bike to the limit. When Enea passed me, I knew I had no chance to catch up,  so I opted to continue the race, trying not to make mistakes. I think the team has done an incredible job on the bike. In the last two laps, I tried to recuperate, but the bike was already at its limit."

And, yet, the start of the season during the tests didn't seem encouraging for KTM, what gave you that boost that you lacked and how important is this result for the entire team?
"In Sepang, I wasn't at all happy with how things were going, and I didn't have a clear idea of what wasn't working. The team really did a great job figuring out exactly what to work on, in order to improve, so when we got to Mandalika, things got better right away. Obviously, we still have room for improvement. I think the package as a whole still has a lot to offer, and we have to also admit that this circuit has never been particularly favorable for KTM."

KTM's best result on this circuit in the past was an eighth position. What made the difference this time?
”Basically the bike now runs better. Normally, especially in the past year, we had to brake hard in corners, and we had difficulty following soft lines. Now that we’re able to do this makes a huge difference. It gives us a lot of security and we no longer feel forced to always race on the razor’s edge."

Was today's improvement  caused by something that was already in the bike and that needed to be taken advantage of or was it something new?
"It's hard to say, some things are the same, others have changed altogether. It’s a completely different bike. The grip is excellent, and this gives us ample margins so that we no longer have to always race to the limit to get results."

Has Francesco Guidotti already changed anything? How much did his joining the team affect you?
”With his arrival came a great wave of positivity and energy. You can really feel the effects, and he’s a really great addition to the team. It’s nice to have him around."

After this result, do you think winning the championship is a possibility?
"I want to keep my feet on the ground. It's just the first race after all. We’ll tackle many other tracks with many different conditions, so it’s early to think about the ranking. What matters now is to continue grinding revolutions on this bike, trying to improve it as much as possible and push it to its limit. There’s only room for improvement."

Yesterday, joking about the difficulties during free practice, you said that the bike was "possessed" by something paranormal. Did that possession work for you today?
”I think that the paranormal activity was the start,” he said jokingly. “To immediately end up ahead was incredible. We went from normal braking to one that allows you quick brake. The guys on the team were good at making this happen.”

So would you say that the difference now has to be made by the rider or does the bike still have a lot to give?
"Surely the bike has shown to be competitive and today was the proof. I don’t think I’ve ever ridden more smoothly on a bike than in today's race. It’s clear that only the future will be able to tell us what conditions we’re in with respect to our rivals, but I believe that, for now, our technicians have done an incredible job."