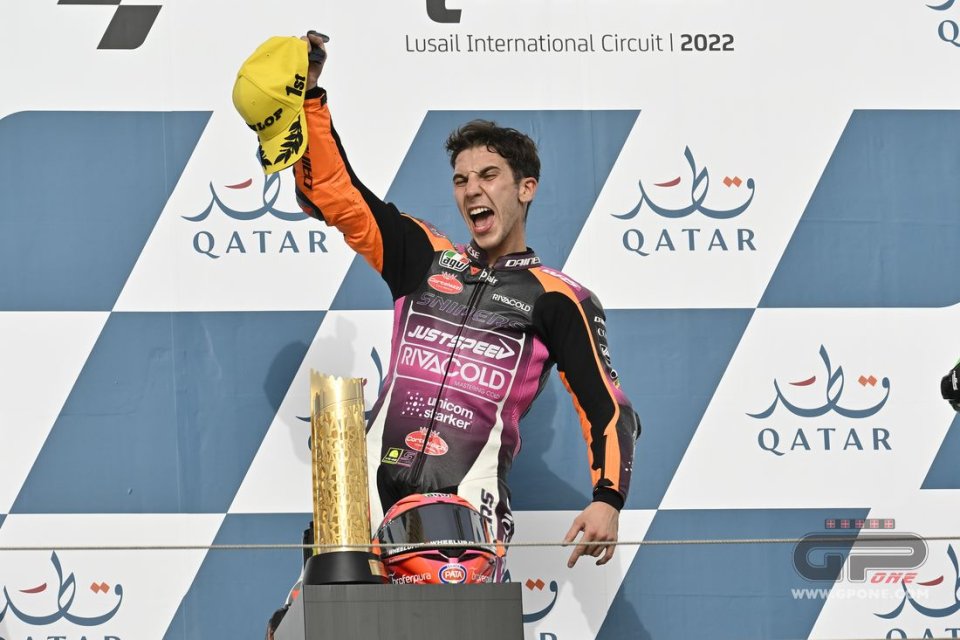 "I have to see the race again but,  from on the bike, I seem to have done everything right," Andrea Migno is still capable of irony on a very important day for him. After almost five years, he has returned to the top step of the podium. A result he achieved in the Moto3 only once before today, in the 2017 Mugello GP. Water has passed under many bridges since then, and the rider from the Snipers team had an uphill climb that involved a lot of effort and hard work.

"It's a wonderful victory that arrived after a long time, a lot of work, and many sacrifices,”  Migno said. “It’s special because, when you don’t win for such a long time, that means that the difficult moments have been more than the good ones."

Why did you have to wait so long?
”I don't know. I've had a lot of good races but no wins. Logically, we’re always looking to improve and, last year, I raced more as a protagonist than the previous ones. So I started from a good foundation."

What kind of race was it?
"Sasaki surprised me. He seemed like Fenati at Misano or Silverstone last year. I tried to keep up with him, but I couldn't. Unfortunately for him, but fortunately for me, he had a problem."

You ended up first, but with a crowded group behind you.
"I don't know what happened. I just thought I'd push it. On the last lap, I simply wanted to win, but  Garcia was behind me. He’s tough. Before the finish, I felt his engine behind me. I crouched behind the fairing and ... it worked."

Did the winter work pay off?
"I have to thank the team and the VR46 for everything we've done over the last few months. The bike is very similar to last year’s, so I worked to find a good base during the tests. The track conditions today were worse than those we had in 2021, but I managed to be fast and steady."

You're at ahead of the World Championship.
”I’ll be first until Mandalika. If they want to end the season now, that’s fine by me,” he said laughing.

Bagnaia: "Portimao will allow us to evaluate our work so far"