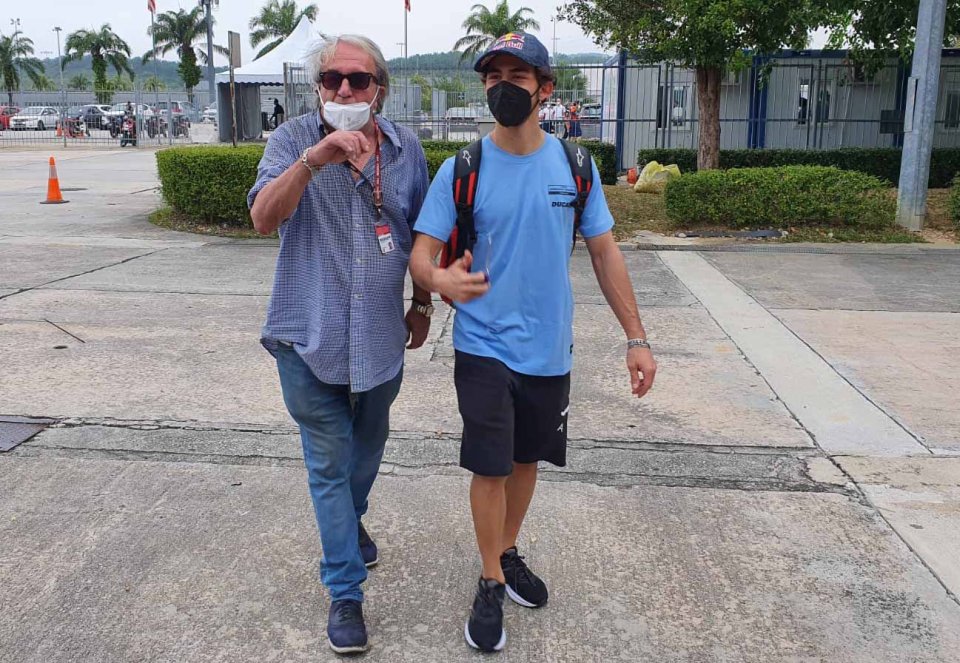 Enea’s victory at Losail is a starting point. Bastianini has an enormous natural talent, a potential serial winner. He only needed to be whipped into shape, so to speak, about practice and certain aspects of his character.

Practice he sorted out this winter, in the tests in Malaysia and Indonesia, while for the race it was his tactical intelligence that solved the situation. I also realized this on Saturday: when they eliminated his best lap time, in the past he would have been discouraged, instead he got back on the bike and improved his time by entering Q2, as he had told us and promised himself.

This is a sign that he now feels he is on par with the others, and since he is not lacking in talent, as I said, I think he can be a protagonist in this world championship. He has come a long way: when I took him and started working with him as a manager, he came from Honda in Moto3, with the Estrella Galizia team. Later I took him to race in the Leopard team, the best in Moto3. There he learned a lot, but the turning point was his entry into the Italtrans team where as chief engineer he had Giovanni Sandi, whom you will remember as Max Biaggi’s chief mechanic at the time of the Roman champion's triumphs with Aprilia.

Sandi worked hard on him, believing in him right away and in fact together they won a world championship in 2020. Then there was the choice of Ducati. It was a well-considered choice to race in 2021 with a 2019 bike. Despite this he reached the podium twice, two third places in Misano.

Today he is continuing his development path with the 2021 Ducati, with some evolutions. He has grown, now the next step will be to join an official team.

From a character point of view he is very reserved and quiet, he really lives and considers motorcycling as fun, not a job. He is a straightforward guy, he has no ups and downs, he always analyses the situation in which he finds himself. A positive feature of him is that when he gets something in his head he has such a character that he will get there in every way.

As a rider he is a late braker and has such a clean way of riding that he is able to use the tyres less than his opponents. In fact, even here in Losail he set the track record in the last few laps.

That was found out by Fabrizio Cecchini, Gresini’s historic crew chief, who took him to the world championship by presenting him to Fausto Gresini.

* Pernat is one of the historic managers of the world championship. He was the man behind Gilera’s successes in motocross and then, together with Jan Witteveen, the architect of Aprilia's many triumphs, before moving to Cagiva where he managed the arrival of Randy Mamola. Histrionic, politically very incorrect - one of his many strengths - Pernat continues to be a manager out of passion: he chooses his riders based on instinct and gut feeling and for years he has been the columnist of GPOne.com, the critical voice of the Grands Prix with his 'Fast by Prosecco' videos and numerous Live shows on the site's social media channels.

The Soft tyre in the front provides riders with a very good feeling and also a strong grip on maximum angle. The Medium front tyre could also be a...
3 days 19 hours ago