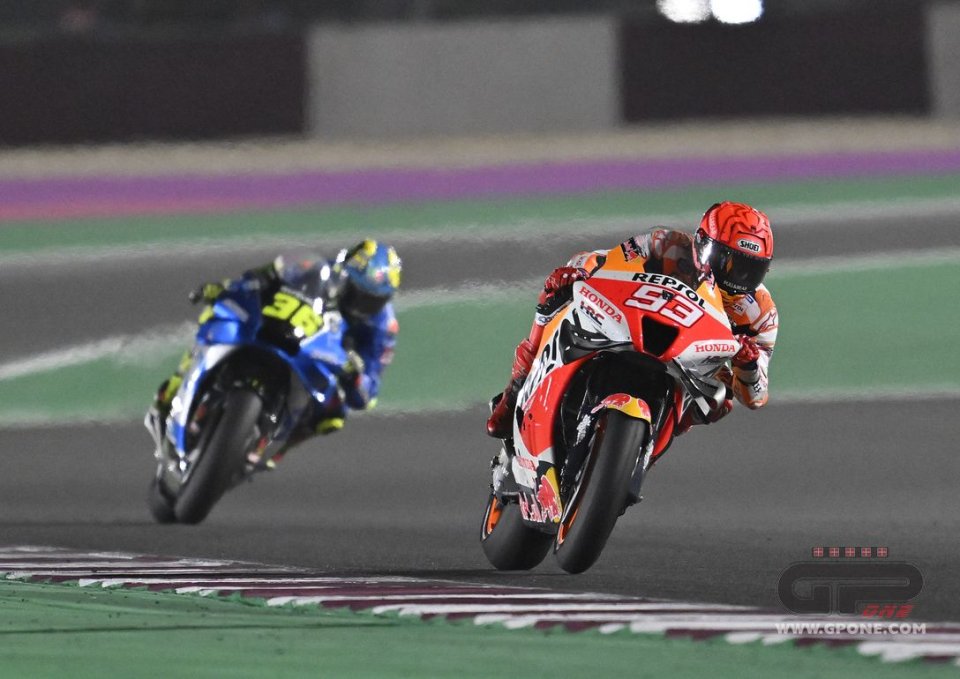 It wasn’t the usual Marquez, the one we saw in the Qatar Grand Prix, but an incredibly solid rider, focussed on not making mistakes. The award, for him, in the inaugural Grand Prix of the season was a fifth place, unusual for the eight-time world champion. It's not that Marc didn't fight: he got off to a good start, then tried not to lose ground from his teammate, Pol Espargarò, but when he was attacked by Binder and then by Bastianini it was clear that he was not able to respond with his usual audacity.

“Going the distance was one of my main concerns - he started explaining - but I have to say I had no problems. Physically I'm happy. Sure, in the end I was tired, but like everyone else. Before the race, I was more optimistic about the result, but only because I was hoping for a slower Grand Prix: it didn't go that way and today we found four riders who were faster than us on the track. The pace was really incredible and I didn't have that pace, I didn't have that speed ”.

From the outside we saw a less smooth Marquez than usual, especially in the changes of direction.

"I didn't have the confidence with the front, but we knew that from before the start of the GP. For this reason, during the warm-up I tried a medium tyre, which was perhaps a bit better, but I had a crash that took away a bit of confidence. The soft gave me more warning, so I used it. As I said, it was a fast race: there was some doubt about the grip of the rear, which could have slowed us down, but in the end the tyre wear was under control. I tried, I gave one hundred percent, but when I saw that it was not possible I gave in: fifth place is fine. I ran a solid race, even if not my best ".

On this aspect, it must be remembered that the new RC213 V was built with a new philosophy.

"It's true, we are discovering this bike every time I ride it. I haven't touched much here, I just concentrated on the lines and riding. It is a big change, but there is great potential and then this is a particular circuit in which we have often found ourselves in difficulty. Other more favourable circuits are on the way: Mandalika, Rio Hondo and Austin ”.

Marquez insisted a lot on the lack of confidence with the front end.

"Confidence with the front is not at its best and I'm struggling to understand it - he admitted - In practice I believe in it and push harder, also because if you crash it's not a problem ... but I wanted to finish the race and, as I said, after the crash in the warm-up I preferred not to risk ”.

On the other hand, however, his teammate, before the mistake while he was fighting with Bastianini which forced him to go 'long', had been very fast.

“Pol was faster than me in the race, but also during the whole weekend he was faster. I haven't looked at his data yet, but it seems that he is able to stop the bike better and he uses a lot the rear brake. From the moment he rode this bike he was fast, but it's okay to have another fast rider in the garage ”.

Experience in this sport means a lot. One cannot help but ask him what he thinks of Binder and the KTM, which was one of the surprises of the Qatar Grand Prix.

"The KTM is the bike I understand the least - the Spanish champion sincerely explained - I can tell what Bastianini does, how he rides his Ducati, but Binder is incomprehensible, one lap he goes fast, another slow, but he manages to stop the KTM very well. As for the others, Yamaha, Suzuki: we are at the first race, and the first race is always special, especially here in Qatar. Last year, for example, Vinales and Quartararo were very fast. Is it lucky that the candidates for the title today scored fewer points than me? Well, you’re saying this, today I saw two riders who will be my opponents in the world championship, Bastianini and Pol ”.

You and he use a lot of different components on the bike. Pol for example uses the small additional flaps on the sides of the fairing.

“Yes, we use a different fairing, me and Pol. I tried those appendages, but I don't like them. We have different styles and when I used them I pushed the front even more. However, there is no big difference. At Mandalika, however, it will be easier to understand the behaviour of the RC213 V, because here we practice virtually only in the afternoon, in the morning it is pointless, instead in Indonesia we will have two real practice sessions ”.

Are you satisfied with the result in the end?

“I got the best position I could have aspired to. My only hope was that the race would be held on a pace of 1.54 high, but when Bastianini fell to the low 1.54s, I realized that I had no more. Had it been four or five years ago I would have raced trying to win or I would have crashed. Today I picked up my pace and I can say that 11 points are better than crashing ”.

Isn't the 2022 Honda lacking something?

“The Honda is fast, and Pol proved that he had more speed than me and was in the lead for a long time. I didn't feel perfectly comfortable, but in the end we finished the weekend well with fifth place. When looking for the last two tenths, you need to have a bike that suits your style. As I said, however, the bike has good potential, otherwise you can’t achieve certain times”.

What is your final view on this first Grand Prix of the year?

"You said it yourself: we don’t know if the three favourites in theory are the favourites or not. In my opinion Bastianini is more of a favourite than Pol, for example. Today he was really flying, even when he passed me in Misano last year it was the same, he was almost a second quicker than me when he went away. In any case, the world championship is neither won nor lost in the first race ”.

You already said this, but do you completely rule out the fact that you are not in perfect physical shape?

"The race was very fast, there was no time to rest, but physically I'm happy because I didn't have any pain, I was fine".

What are the next steps?

“The Honda does not lack speed, it is I who have to adapt and work with the team to get the most out of this bike. We will see in Mandalika. Of course, at the moment I can't ride as hard as possible, but I have to be patient in order not to lose the world championship: when you can't win you have to get points ”.

The new bike is designed to have more grip on the rear: it is the opposite of the previous one. Isn't that the reason why you feel it is not as stable in front?

"Of course, when you have more grip and traction, you lose something in the front and I have always ridden with the front. Now it's exactly the opposite, but as I said I have to know how to adapt because I still can't understand exactly where the limit is ”.