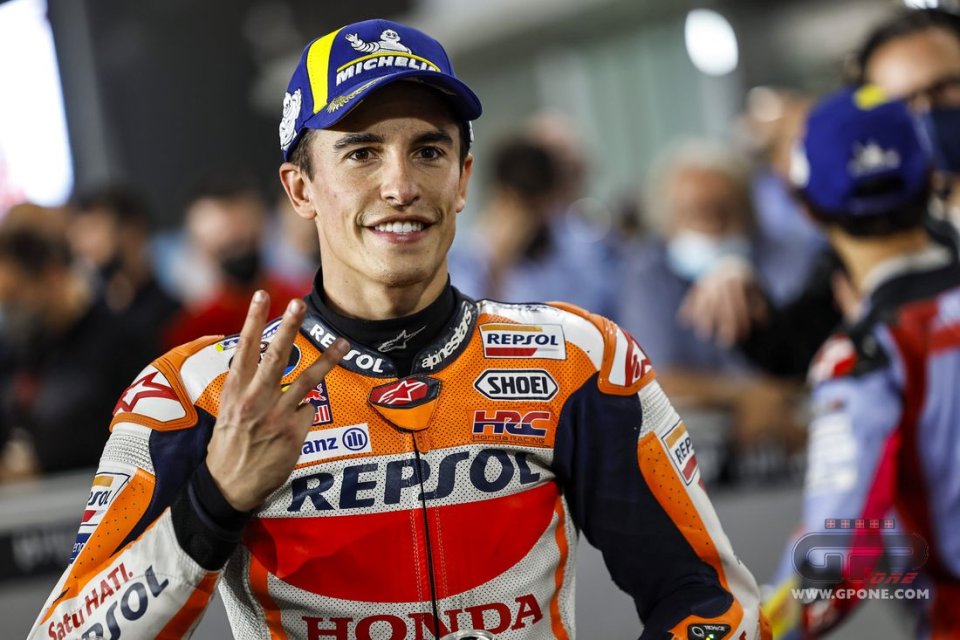 He might not be the best Marquez ever, but considering what's happened in the last two years, he couldn't ask for more. "Before leaving for Qatar, I would never have expected to start from the front row," Marc, whose vice has always been to go beyond all expectations, admitted. And he doesn't seem to have lost it. The new Honda is still a novelty to be explored, but whatever is missing, he’ll compensate for it. Even with a little cunning, like when trying to follow Mir’s first and then Bagnaia’s slipstream in qualifying.

"Everyone is looking for a slipstream in Qatar. It helps a lot here,” he admitted. “But the most important thing today were my feelings in the FP4, where I was consistent. I was easily getting the times. Tomorrow, however, we’ll have lots of things to manage, the tires, the petrol, the conditions of the circuit. It’s the first race of the year, but I want to be up in front.”

It's also going to be the first race for the new Honda.
"I haven’t yet understood the limit of this bike. In fact, I haven’t fallen once this weekend,” said smiling. “You drive differently from the past. Sometimes, the more you try to push, the slower you go. Like in qualifying, in the first two sectors, I rode smoothly, then pushed and made a mistake. Surely, from mid-curve onwards, this bike is better than last year's."

Are you ready for the race?
”I was still too far from the best this morning. But, in the afternoon, I got closer. I'm not the fastest rider. I think I can fight for the top positions but not for the victory. It’ll also depend a lot on the conditions that we find. Just look at what happened to the Suzuki today. The challenge for me will also be understanding how my body will react during the twenty-two laps."

How did you feel today?
"I woke up without pain, but last year was a nightmare. I feel good, and I hope it's the same tomorrow. Riding the way you want to is an entirely different thing.”

You said you're not the fastest. So,who is?
”Looking at the first rounds, the Suzuki. But, in the FP4, the Ducati progressed, especially Zarco. Quartararo is also fast, then my teammate Pol. In general, however, I say the Suzuki."

You haven't mentioned any of the riders who’ll be starting from the front row.
"Because the riders with the best pace will start from behind. How the race will go will depend on who’ll take the lead. This will make the difference between a larger or smaller leading group. Many riders had a similar pace, but it’s one thing to maintain it alone, it’s another when you’re in a group."

Do you have a strategy?
"When you're the strongest, you can handle tires and races, or else push, and then see how it ends. This will be the first race with the new bike. We have to understand how much it’ll wear the tires. I still don’t know what it needs, like I knew before. We have to gain experience, trying to achieve the best possible result. For now, I'm in the front row, and I'm happy. If everything goes well, I could fight for the podium."

Have you been particularly impressed by any bike these days?
"This is one of the most particular tracks of the calendar. It’s still early to say which is better and which is worse. Not to mention that the best bike doesn’t exist. Instead, there’s the best compromise between motorcycle, team, and rider. That said, the thing that struck me the most was the Suzuki's top speed improvement. Perhaps competing with them now will be as difficult as with the Ducatis.”