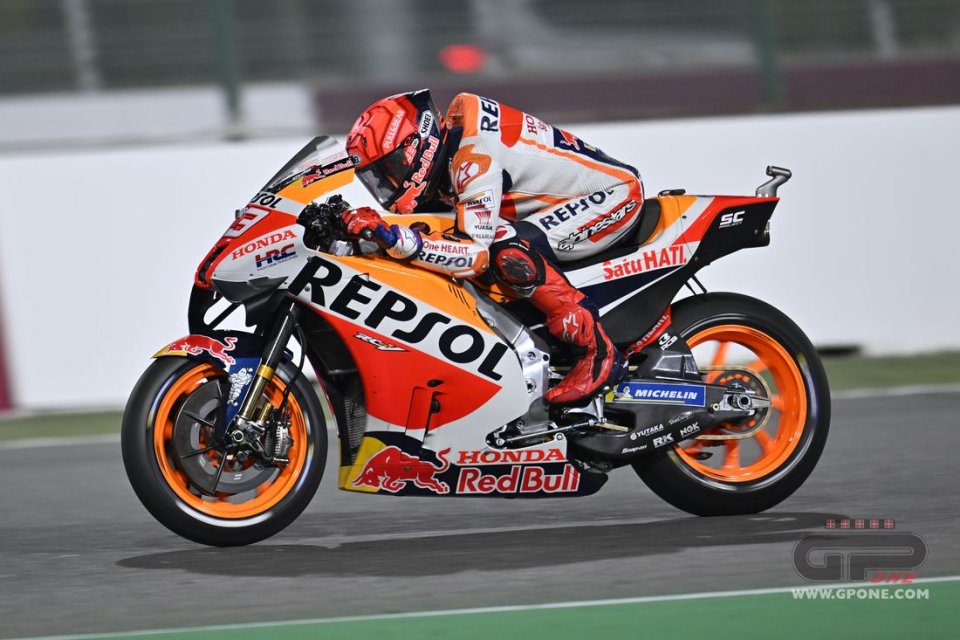 Marc Marquez's ordeal seems to be over. Seeing him at the end of the first day in Qatar, you can tell that the most important thing isn’t a second-place time. The Spanish champion was looking for answers from his bike, but even more from his body. He received them, and they were positive.

"My physical condition has improved a great deal. It usually it doesn't happen from the tests to the first race, but it's different this time," he explained."After a winter practically spent on the couch, a month is a lot, and I rode much better today than I had in Malaysia."

Are you in perfect condition?
”For the first time, I didn’t  feel pain in my shoulder. It was constant last year, but I didn’t even take anti-inflammatory medication today. It bothered me a bit at the end of the day,  but that's normal. Pain is something else. I didn’t have  physical limitations when riding today. We just have to understand how it’ll go as the days pass."

Did everything go as you expected?
"On one hand, yes, On the other, no. I’m second,  but that position doesn’t reflect my pace. My goal before leaving was to be in the top ten, and I’m happy with how I rode. Even if I still do it in a somewhat strange way, I got the times."

Do you till need to figure out the new Honda?
”I used to push a lot when entering corners, but I don't feel the front that fast or even its limit. On the track, I seem to be slow, but then looking at the times, I see that I’m fast. On the contrary, if I try to go faster, I’m slower. It's strange. I still don't understand the direction to follow in order to take full  advantage of the potential of the bike. For now, I have to ride cleanly. I have to sacrifice my strength, entering corners, to gain in other areas."

It's a completely different project.
”Honda did an amazing job. I think they’re the only constructor that can make such a big change in a year. It seems like I’m riding another constructor’s bike. I mean that in a positive way. But we still have to figure out how to find the best set-up. Today I used the same set-up as the tests in Mandalika, because we still have to figure out how to behave. It’s okay, but we're not the fastest on this track. Suzuki and Yamaha are more consistent."

Did you expect Ducati to be in such trouble?
"I'll let you know after the race. I know Gigi,” he said laughing. “I don't think they're in such a bad situation, especially here in Qatar. The track grip will improve, and they’ll be able to use all their torque. We’re on the first day of the first race. We can’t say that they’re in difficulty."

At what point are you?
“I’ve always struggled on this track, in all the classes, because of my riding style. I didn't have the best pace today, but I'm not far away. I think I need another two tenths to be able to fight for the podium."

His wife posted about his condition: “He is okay and in the best place possible. They will keep him in for a few days to monitor him.”
6 hours 50 min ago

Peter Oettl merges with Intact GP. The Swedish brand Husqvarna will race in Moto2 with Darryn Binder and Lukas Tulovic and in Moto3 with Ayumu Sasaki...
1 day 11 hours ago