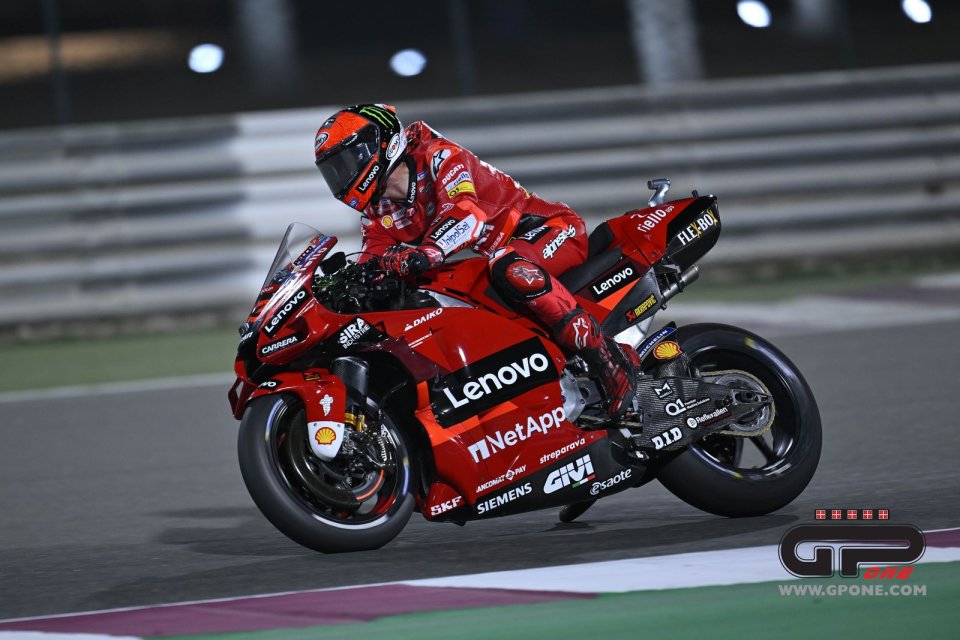 Pecco Bagnaia only just managed to scrape into Q2 with the 10th fastest time today, provided that, as everyone predicts, there is no improvement in FP3 due to the asphalt conditions, which are always warmer in the morning.

Obviously, a lot more was expected from the men in red, also thanks to a crash in the first free practice session which gave the impression that something was not working properly in the man-machine pairing which, on paper, is among the favourites for this world championship.

“Normally I don't like crashing in FP1, especially here because it's a bit of a pointless session - explained Bagnaia - I crashed because the front tyre was a bit cold, but it can happen in Qatar, precisely because we have to use different tyres in FP1 and FP3 compared to FP2. However, FP2 was positive because I understood the reason why I didn’t have confidence with the front ".

“Obviously I'm not happy with today's result, but because when you try a lot of things you have to have a clear decision on what to do. And I didn't like the feelings that the front gave me ... maybe the conditions weren't optimal, but the positive side is that we understand and know ​what to do. Of course, I wasn't 100 percent comfortable. I certainly expected to be faster in FP2. FP1, on the other hand, I don't see it as an important session for the race”.

Talk about today’s result soon gave way to the curiosity of the day: Bagnaia's decision not to use the new GP22 engine in favour of a solution, let's call it 'mixed'.

“We are just using the best package possible that we decided after the test in Mandalika. I think every time we are used to maybe saying too many things or news coming out from Ducati too soon, but if we think about the other bikes nobody says anything about the other bikes. So, every time Ducati is the one that everyone wants to speak about and it’s a bit strange. I am happy and I’m totally confident with my team that this engine is the best way to work. It’s a mix, not the one in Jerez, not the one in Mandalika, not the one in Malaysia. It’s a mix between this year’s and last year’s engine.”

Whose decision was it to use it? The response from the rider from Turin makes clear the responsibilities, because obviously Ducati is known for producing the best engines and everything about them arouses curiosity.

“We decided to use the best package for us and it’s normal – said Pecco, who added - it wasn't just my decision. After testing in Indonesia we saw the potential of this spec. It was chosen because it is the engine with which I am able to be more consistent, which is why it seemed the right choice ".

Bagnaia then added other details.

“I prefer this engine in this mix, and I like it more than the past and more than the new: we tried it during the tests and I liked it. We were working on various configurations and at Mandalika we saw that it was fast on more than one circuit and since we want to win at Ducati we decided to use it”.

The conclusion was on a lighter topic: the birth of little Giulietta, the new-born baby girl of Valentino Rossi and Francesca.

Pecco's answer took us by surprise…

"When I congratulated Vale, he said: why did you crash at turn 6? For sure, Giulietta will be the girl who has the most uncles".