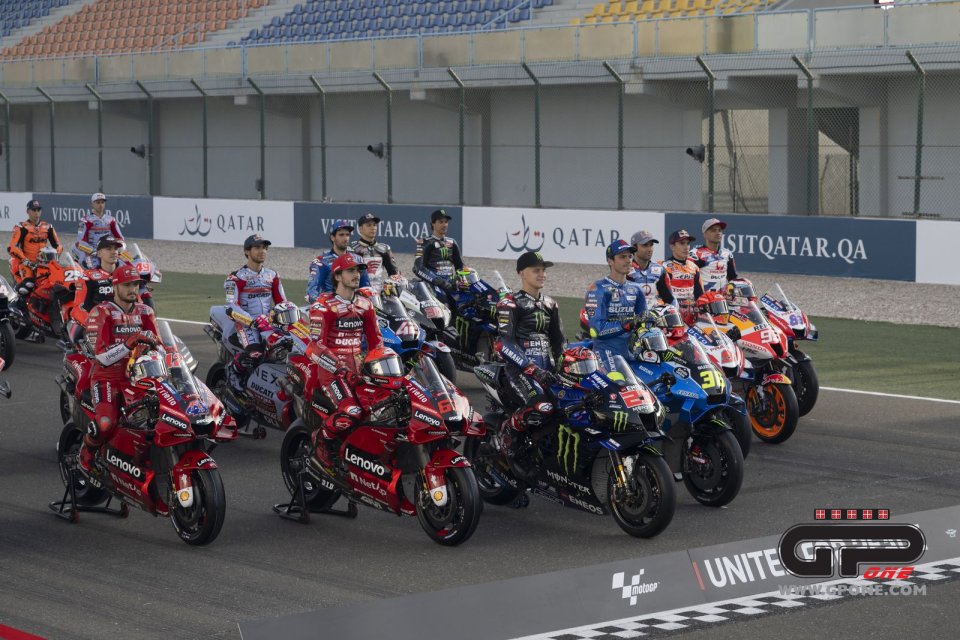 All against one. While in 2019 it was Aprilia (closely followed by Honda) that lined up against the infamous 'spoon', this time it was Honda, Yamaha, Suzuki, KTM and Aprilia who declared themselves compact in the first MSMA meeting of the year to ask for the abolition of the device commonly known as the lowering device, or 'ride height device'.

We are obviously talking about the device that allows the Ducati riders to lower the front as well, because as for the system that allows the rear suspension to be lowered - the so-called holeshot device, to facilitate starting and acceleration by virtue of lowering the centre of gravity - they all have it now.

It seems to be the destiny of Ducati, and of engineer Dall'Igna, to constantly see himself opposed simply because of his 'lateral view' of the regulations: what is not expressly forbidden must be considered allowed. A rule, also unwritten, on which F1 has built its innovations for decades.

The excuse, in the case of the 'ride height device' is the usual one: safety and costs. For this reason, the five sisters have asked the Grand Prix Commission to ban the device starting from 2023. Of course, the abolition will not be automatic: the GPC is composed of FIM, IRTA, MSMA and Dorna and decides by majority, where the Spanish organizer is used to eliminate any parity.

As per internal regulations, everyone keeps their mouth shut, but we still managed to understand the arguments proposed by the five sisters in support of the initiative.

One, the first, is the fact that the lowering device would not be of any use to production motorcycles. A laughable statement, given that in MotoGP carbon brakes, pneumatic valves and seamless gearboxes are used, which are also of no use in production. Perhaps the seamless gearbox could have some developments, but for the moment it costs the same as an apartment in the historic centre. But no one will ever see pneumatic valves and carbon discs on a production bike.

The fact that a mechanical device allowed by the regulations can be banned is bizarre, but criticizing it on grounds of 'safety' is easy to hear. And already some riders, the most talkative being Aleix Espargarò, have begun to complain, explaining that they consider it dangerous because it makes you lose concentration in riding.

On this matter, just today at the press conference, speaking of the 'ride height device' Pecco Bagnaia replied: "I don't think it’s dangerous, I just have to press a button".

In fact, here’s the rub, as Michele Pirro confessed to us yesterday. Ducati has been developing the device for a year and losing it would mean throwing away the investment. Moreover, its opponents must soon decide what to do: whether to try and chase their rivals with this new technology, and then become the manufacturers who proposed the ban starting from 2023, or to run the risk of neglecting it, all the while remaining technically behind the Ducati. As we said, it’s a big dilemma.

Of course, among the opposition to development, the voice of those seeking to mitigate the performance of MotoGP bikes, to slow them down, has also been raised. This has always been the case and, moreover, continuous improvement is inherent in the spirit of competition. For this reason, the regulations are constantly being changed: to slow down any escalation. It's the myth of Sisyphus all over again: MotoGP, like F1, will always be thrown back into the past: do you remember the ground-effect single-seaters?

This technology was invented by Lotus in 1977, only to be banned in 1983 under the guise of safety. It will return this year in the premier class of motorsport to mitigate the continuous aerodynamic research. The excuse for the return is the current difficulty in overtaking. And what a coincidence that today Marc Marquez, speaking of the effect of wings on the bikes, said exactly the same thing: "they make overtaking more difficult, but riding is safer". The wings, however, will remain, the lowering device we don’t know yet.

Anyone wishing to learn more about the topic READ HERE