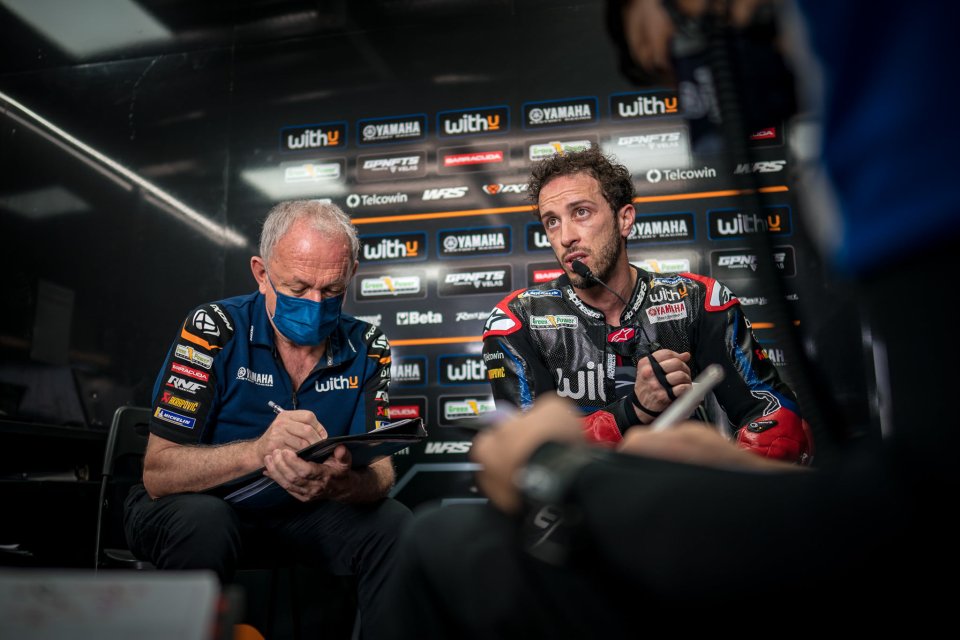 Andrea Dovizioso returns to Qatar three years after his last victory with Ducati in the desert. In this period of time, many things have changed for the man from Forlì. In 2019 Dovi was one of the candidates for the title with the red bike, while now he rides a Yamaha with a lot of question marks holding sway as he himself admitted with sincerity.

On his part there is considerable transparency and at the same time awareness of the situation he is experiencing.

"Not being the centre of attention after so many years is often cool - he said - what I don't like is linked to how competitive I would like to be, seeing as at the moment I don't have the situation under control. As for the rest there are a lot of things to talk about, but that's okay. The fact of not being considered as a world championship contender is not a problem ".

“If you have to do a season as a non-competitive rider it can get tough, so I prefer to avoid it. Experiencing MotoGP like this wouldn't be fun, since I've been used to being competitive almost always in the past. This is the thing that I most care about, which is to try to be a fast rider and enjoy it when you have the situation under control. This is one of the main points and we will see how the situation will be in the races to come”.

Speaking of races, the first will all be outside Europe in particular contexts.

“The first few races will not show the real values ​​on the track until Texas. In fact, I think that the first four GPs will be anomalous, while from Le Mans onwards we will have more honest feedback. I say this because the conditions of the tracks will change significantly from one weekend to the next and consequently it is difficult to draw conclusions ".

The focus then shifted to the present, especially at Yamaha.

"Each Yamaha rider rides in a different situation than the other. Fabio is the reigning champion, Franco skipped several races in 2021, so he has to recover, despite the fact that he has a certain contract for 2023. I, on the other hand, have to adapt to a different bike than the ones I have ridden in recent years. Grip is undoubtedly one of the biggest limits that affects all Yamaha riders. Precisely for this reason I understand the fact that Quartararo wants to be competitive immediately with the aim of confirming his title ".

The season kicks off in Losail, so one wonders what to expect from the man from Forlì.

“Honestly, I don't know, since in the tests I had some strange feelings and we have to work. As I said, not having the situation completely under control is something different than in the past. I will face the weekend with concentration and an open mind, without knowing if I will be competitive or not. As for Marquez, it would be a dream to find ourselves duelling like in 2019, but we have to work hard to understand how to be competitive ".

Meanwhile, for the 2022 season, the riders will have to deal with a new format…

"It has all been brought more forward than in the past due to the problem related to humidity. Personally, I don't agree with this very much, but in the end this is the program and it must be respected. I am convinced that in the first session there will be some tension from all the riders and we will see what happens. I am calm, the Yamaha has improved in braking, but only tomorrow will we understand the real situation”.

One final consideration was for war in Ukraine. One wonders if sport should stop or not…

“It is undoubtedly a very complex situation. I am not in a position to make a judgment, as it is not my responsibility. What is happening is very bad, the only thing we can do is analyse and see how the facts evolve. The decisions are not up to me”.

Lin Jarvis: “Is the World Championship over? No, remember what happened to...