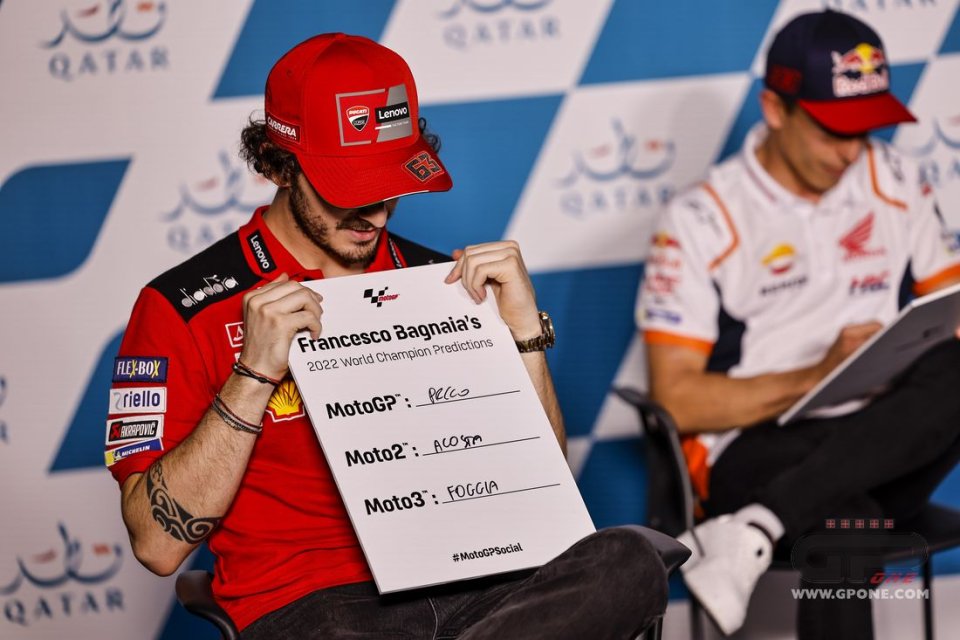 Choosing the winners of the three categories before the start of the championship is a bit obvious as a game. Pecco Bagnaia picks up the pen and quickly writes the names, without any doubts. Then he turns the board: in Moto2 it’s Acosta, in Moto3 Foggia, while in MotoGP himself.

False modesty is not a quality in racing and superstition doesn’t scare anyone.

"To tell the truth, I'm superstitious, but towards the other Academy riders - said Pecco - For this reason I didn't want to put them as favourites, but I think Migno and Vietti have a good chance. As for MotoGP, in the past I had always put other names but this year I decided to focus on myself. I think I have great potential, that the bike works well and that together with the team we have done a good job. In my opinion it was the right choice ".

How important is it to believe in yourself?

“It's essential, you have to be confident in what you can do. Believing in yourself is the most important thing there is and I have learned over the years to do so”.

How did last year's wins change you?

"I definitely believe in myself more and I know my potential is high, this pushes you to do better".

The first races of the season were your weak point in 2021, how important is it to start well?

“Last year I came from two seasons of going slow, I wasn't as ready as I am now. We’ll see how it goes, for sure here in Qatar there will be many riders fighting and, as we progress, the favourites will emerge. It will be important to be fighting for the victory right from the start, not only in Losail, where Ducati goes well, but also on the next tracks”.

Is there a mistake you made in 2021 that you don't want to repeat?

“After Mugello it took me several races to recover, I experienced an unpleasant situation (Pecco refers to the death of Dupasquier, ed.). It took me 3 or 4 GPs to get back to being as fast as before, I wasn't happy with what happened. I would like to try to always be focused to improve myself ".

Just one name: who is your main opponent?

"Quartararo, because he is the reigning world champion and because I think he is a very strong rider".

What about your teammate Miller?

“It is from the tests that I say that Jack is one of the contenders for the title, together with Morbidelli, Rins, Martin… and many riders. During the winter, both he and I worked a lot, so it was normal that we weren't constantly in front. "

Is the GP22 ready for the first race?

“In testing it is always difficult to understand the general level because everyone works differently, but we worked well and chose the best possible package. I am confident that the bike will be as competitive as in the last part of last season ".

Everyone says the Desmosedici is the best bike on the grid.

"They always say that the Ducati is the best, but the last time it won was in 2007. I can say that it is the best bike I have ridden, but not that it is in absolute, as I have not tried the others."

Does starting with the contract renewal already in your pocket make a difference?

“If it’s possible, I would like to stay with Ducati for the rest of my career. For sure, starting with two years more on the contact makes you more relaxed. You just have to think about giving your best, but I think that for me it’s like this. I prefer this situation.”