MotoGP will be the first championship to start, in exactly 7 days’ time, with the traditional night race on the Losail track in Qatar. The world championship is gearing up to face its longest season ever, with 21 Grands Prix on the calendar, nine months in which the circus will go around the world to finish its final race at Valencia on 6 November.

New for this year will be the GP of Indonesia, the second on the calendar, on March 20, and that of Finland, scheduled for July 10, before the summer break. In total there will be 9 rounds outside Europe: Qatar, Indonesia, Argentina, USA, Japan, Thailand, Australia and Malaysia.

To see the production-derived championship on the track, however, we will have to wait until April 10, the date of the first SBK round, at Aragon, for a calendar that includes 11 events. The twelfth round, represented by Phillip Island, still remains to be defined, since Dorna has not yet announced the date of the Australian round.

The clashes between the two motorcycle series are reduced to a minimum, just 3. The dates 'in red' are those of 10 April (MotoGP will be at Austin and SBK at Aragon), 24 April (Portimao and Assen) and 25 September (Japan and Barcelona). Considering the different time zones, only April 24 represents a real clash.

To get a clear idea of ​​all the races this season, we have prepared a calendar that you can find below, where in addition to MotoGP and SBK, you can also find all the appointments of Formula 1, Endurance, CIV, BSB, CEV, Asian Talent Cup , MotoAmerica and All Japan. 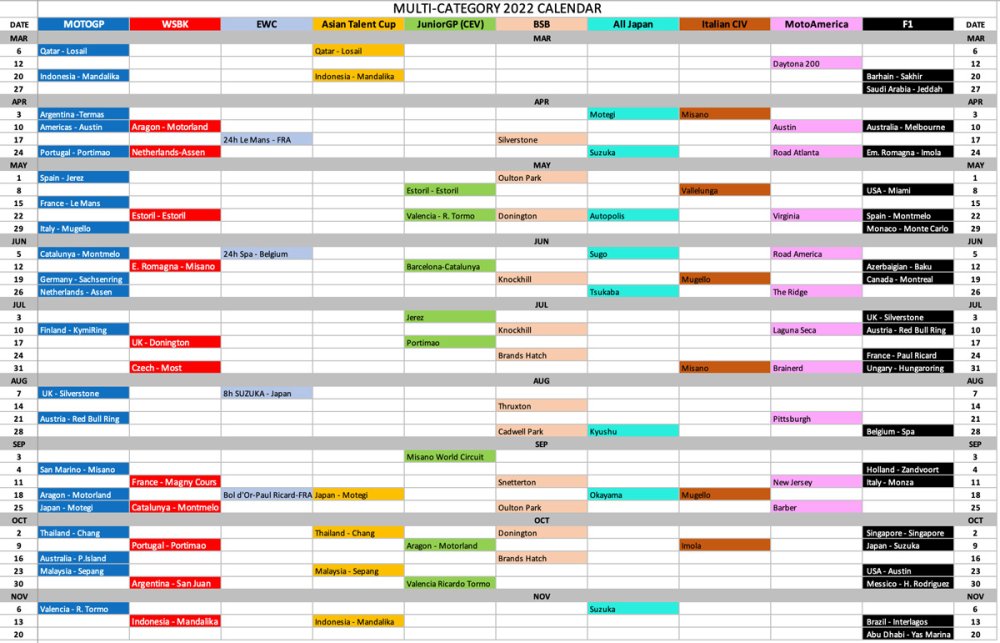 Without a doubt, the biggest number of clashing weekends are with Formula 1 and it could not be otherwise, with the premier car racing series reaching 22 GPs this year. The Russian Grand Prix in Sochi, scheduled for 25 September, has in fact already been cancelled: "The F1 world championship visits countries all over the world with a concrete vision to unite people, bringing nations together. We are watching the developments in Ukraine with sadness and shock and hope for a swift and peaceful resolution to the present situation. On Thursday evening Formula 1, the FIA and the teams discussed the position of our sport, and the conclusion is, including the view of all the relevant stakeholders, that it is impossible to hold the Russian Grand Prix in the current circumstances" was the note issued by the FIA ​​last Friday.

The weekends in which MotoGP and Formula 1 will be on track at the same time will therefore be nine. Starting with the first four-wheel race, on March 20 in Bahrain which will coincide with the one in Mandalika for the bikes.