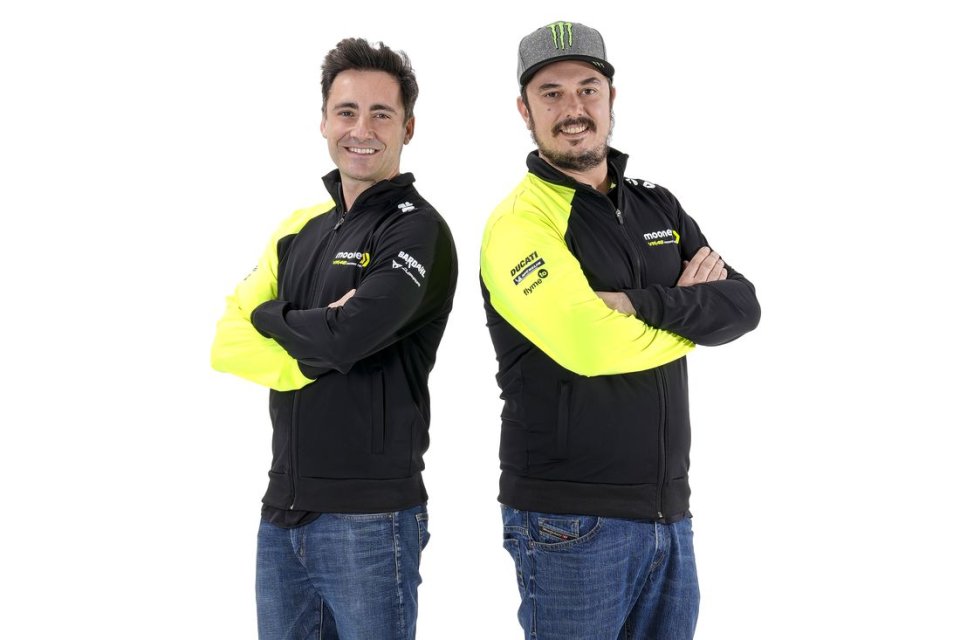 The new adventure of the VR46 team has officially begun, with a presentation on the stage of the Rossini theatre in Pesaro. "The closing of a circle" it was defined by Valentino Rossi, in the role of patron of the team. It was 2014 when the team entered the Moto3 world championship and finally it has now arrived in the premier class.

"It is an evolution of that project - explained Alessio Salucci, for everyone Uccio, who covers the role of team director - We are in MotoGP and we will see what happens, the emotion is great. We started working on this project last March, even if the decisive months were the last three, the ones in which we built the team. Finding the budget is always difficult, even though thanks to Valentino and the VR46 it is a bit more so ".

Thus, in the winter, Mooney arrived as the main sponsor ("although we like to talk about partnerships, with many projects to be built together", Uccio stressed), after the agreement with Aramco had not gone through. Pablo Nieto, MotoGP team manager, explained what happened: “As everyone knows we had a contract signed with them, but we realized that the timing was different. This is why we decided to continue on our way, it was just a matter of timing ".

All’s well that ends well and in a few days the VR46 team will be on track for the first race of the season, in Qatar. Salucci's expectations are high:

"Two years ago I pushed for Marini to move to MotoGP, even though he would have found a difficult situation in the Avintia team, with a Ducati that is a little ... tired. Now he has a better performing bike - a factory GP22 - that experience will be useful to him and we have built the team around him. I don't want to put too much pressure on him, but I know that he will be strong, I would say that the podium is a realistic goal ".

Nieto also has confidence in Luca: "I'm very, very optimistic about him, so much so that I have to stop for a while - he smiled - In the winter tests I went to see him on the track and I must admit that he impressed me. If we can give him what he needs, he can be a real star of the championship, he is a rider who has a lot to offer. "

Then there is Bezzecchi, who will instead be making his debut.

"He has worked well and is a sponge - continued Pablo - he is an intelligent guy and he knows that Luca's experience will be useful to him. I want them to work together, to keep the same DNA that the team had in Moto2”.

All the riders on the team come from the Riders Academy, but things could change in the future.

“We made this team following the needs of our riders, but it must not become a limit - underlined Uccio - There will come a day when we will not have riders ready for MotoGP and then we will look around. Our goal is for Luca and Marco to join an official team in the future, perhaps as early as next year for Marini, and if that happens it will mean that we will have done a good job. We will see what the situation will be in the middle of the season”.

Valentino did the honours today and Salucci guaranteed that his presence in the team is not limited to just putting his name.

"For Vale there is a new adventure in cars, but he will have more time to dedicate to this project - he confirmed - Two or three times a week he comes to the office to help us, he has great experience and having him with us is special".

It is not for nothing that some of the Doctor's men have also followed him in this adventure: Matteo Flamigni is Marco Bezzecchi's chief engineer, David Munoz that of Luca Marini.

“We are different from the others who work with Ducati, we wanted to have our own people. We talked a lot about it with Dall’Igna, we know that at first it may be more difficult but Ducati helped us, letting them go and learn directly in the company ".

Pulling the strings, as mentioned, will be Pablo Nieto, who does not forget a lesson taught by his father, Angel. “When I was racing, my dad came to me and told me that even if the bikes had changed a lot, the heart of racing had remained the same - he said - Even today, the bikes are different but they have the same blood. I will try to pass on my experience to my riders and also to learn from them”.

In Moto2, on the other hand, Luca Brivio, Davide's son, will be the new team manager. After working for many years as a team coordinator, it is time for him to take the leap.

"I have learned a lot in recent years from Uccio and Pablo, I think I have acquired the right skills - he said - Vietti had a good season finale in 2021 and the goal is to start from there, while we will have to support Antonelli in his path of growth in the jump from Moto3. We will see, for now we have only done the tests, in the race it is always different”.