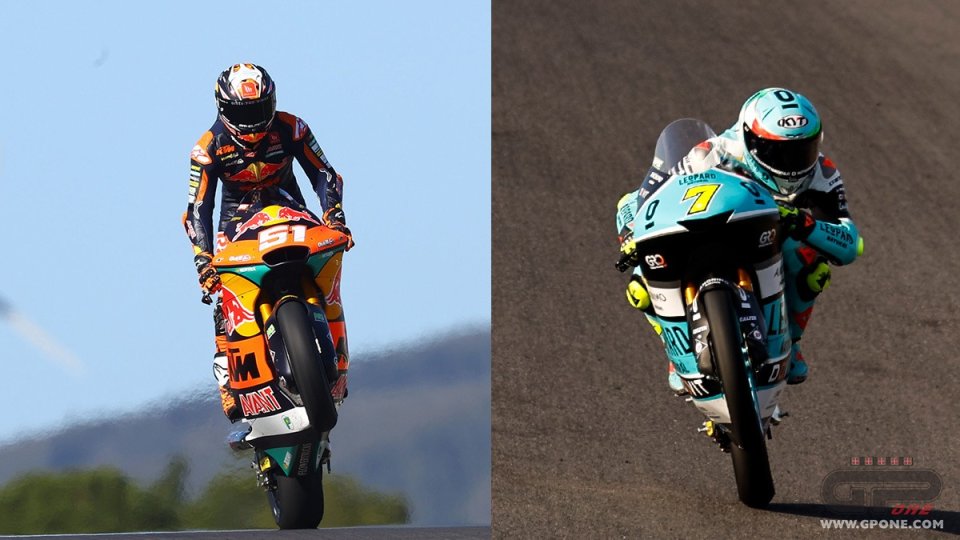 Last year the Moto3 title was fought out in an exciting season finale, a head-to-head that was resolved only in the penultimate race, thanks to a kamikaze move by Darryn Binder. This season the paths of Pedro Acosta and Dennis Foggia have split up, the Spaniard moving to Moto2, again in the colours of the Ajo team, while the Italian has remained in the cadet class, with Leopard.

What hasn't changed is their habit of staying in front of everyone else. To reiterate this, they did it in the three days of official tests at Portimao: 1’41.552 Pedro’s new official record on the Portuguese track, 1’46.990 that of Dennis. Two times to make it clear that everyone will have to deal with them (again).

To be honest, Acosta will probably start the year without any pressure, being a rookie, but the shark is now portrayed as the new Marquez and everyone expects the best from him, right or wrong. His speed makes you forget that you are in front of a boy who is not yet 18 years old and who made his World Championship debut just a year ago. He has forged ahead, getting on the podium in his first race and winning the following three, demonstrating an enviable competitive maturity.

For the title he also had a bit of luck (which champions never lack) and the move to Moto2 was virtually a must, as if to say that the climb to MotoGP must be as quick as possible. It’s all a bit of a whirlwind of events that could make such a young boy tremble, but for the moment Pedro has made it clear that he knows how to use his brain as well as his right wrist, to withstand the pressure and dodge flattery.

After this winter he will have, like it or not, the spotlight again on him, amidst the mirages of MotoGP and another championship to win on his debut. But what Acosta absolutely does not lack is time, age is on his side and he doesn't need to be in a hurry. He can easily play the game at his own pace, as he has so much talent and the results will come, even if the public falls in love with phenomena and companies that are bordering on the impossible.

Thus, a career like that of Dennis Foggia may seem almost a bit too slow in comparison, just because it took him a couple of years to measure up to the world championship. Forgetting that he had won the CEV when he was 16 and is now just 21, which has earned him the title of veteran in the entry class of the World Championship.

Dennis has remained in Moto3, also due to some contractual dispute, and he doesn't want to waste the year. In 2021 he had to regret a subdued start to the season, but then he finally cut loose, with 5 wins and a title missed by a whisker. In theory he was ready to move on from the category, but in practice things went differently and he decided to live with what he’s got.

He starts as the favourite and he knows it, he did his winter homework in the right way (despite a problem with his foot that made him miss the two days of Jerez) and he will be prepared for the first exam in Qatar. Where he will be alone against everyone else because he is the benchmark and every other rider wants to beat him.

It will be a good training before moving on to Moto2 and meeting Acosta again, perhaps to renew that rivalry that began last year and which it would be nice to see flare up again in the future.