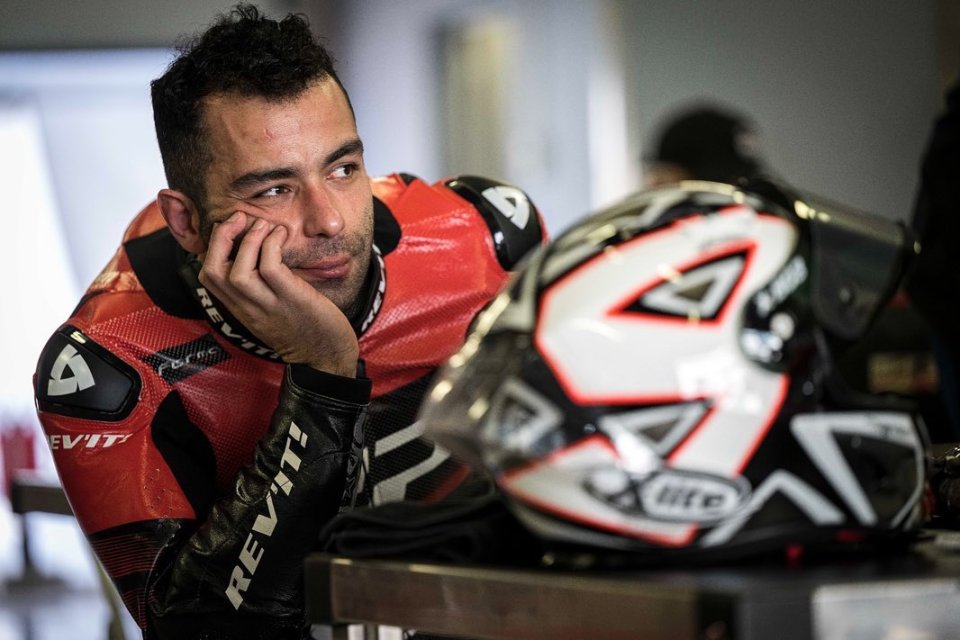 Danilo Petrucci can breathe a sigh of relief at the end of the two days in Portimao spent riding the Ducati Panigale V4 that he will use in MotoAmerica. Petrux worked to become familiar with the bikes and above all with the Dunlop tyres that he will have to use in the race, which are very different from both the Pirelli SBK and obviously the Michelins from MotoGP.

A mix of factors that might have confused others, but which by no means took away the smile from Danilo, who was able to lap in 1'41.0 on race tyres while Rea's best time in the tests was 1'39.6 with soft tyres. In short, the potential is high, but the challenge is far from simple. At the end of the day Petrucci told us all about these Portimao tests.

"It was a day of experiments. The team doesn't know me, and I don't know the bike or the tyres. It was a complicated day, in the sense that we moved many things on the bike, but the time was always the same, both with new and used tyres. I always remembered that on this type of bike, due to my physical size, you need a really long bike. In fact, in the end we changed the set-up, put on some… let’s say… new race tyres and dropped the time by a second and did a 1'41.0. I liked it because I did a whole run in low 41s, only we did it only at the end ".

The Dunlops are a big unknown for you…

"All day I used very hard tyres because I need to understand very well the limit of the tyres and also of the electronics. This bike has very advanced electronics. Today we got to know each other a little and we understood the direction in which to go. These Dunlops are made in America for those asphalt surfaces and riding here with everyone on Pirelli tyres, which as a result leave Pirelli residue, makes it difficult to understand how things are. Yesterday morning as soon as we went on track, we immediately went fast, then we got bogged down a bit until this afternoon. But in the end, thanks also to my experience, I convinced them to do as I wanted and it worked. Ducati is helping us a lot and is looking at what is needed. We have good support, like that of the factory team. ".

Loris Baz proved in 2021 that MotoAmerica is no easy ride.

"Baz did not win any races in MotoAmerica, then he came to SBK and finished third. Racing there is not an easy ride at all, because the Yamahas are the same as those that Toprak and Locatelli have, so they are 100% official. Then there are also the Suzukis that are strong and there are several riders who are strong. Then what changes a lot are the tracks which are different from what we are used to here. They all almost scared me for the layout of the tracks and also for the asphalt. Baz surprised me last year when he came to SBK without trying anything and made the podium and had a hard life there in the States. It's not bullshit at all. Precisely for this reason Ducati has decided to support more this team. The technical difference is very big compared to the SBK world championship, so they want to understand what to do on the bike to go fast".

What will you ask Dall'Igna?

"I think Dall'Igna will call me, first I will ask him to let me try the Desert X. I have no particular requests for him, I have a very good personal as well as professional relationship with him. We have remained close, actually I have to send him some wine. He asked me! At the end of our relationship I went to him and I know he likes Amarone. I bought a ruin to be restored right in Monte Falco and there they make a red wine called Montignanello, which is similar to Amarone, in fact, he told me that he is coming down to buy it. Among other things, the ruin is still there and I remember well that he called me to tell me that I was no longer part of Ducati while I was in front of this ruin! Now that I have returned to Ducati, I can finally restructure it. Anyway, I'll tell Gigi how it went and we’ll see."

Ducati will also support you with Crupi.

"I have a long-standing relationship with Giovanni Crupi. He was my engineer in Barni with Stock 1000 and we met here and I work very well with him. It is a nice environment, I am happy to work with them and I think that in the Misano test there will be even more people. Zambenedetti also has a lot of confidence and has seen everything we have done here. "