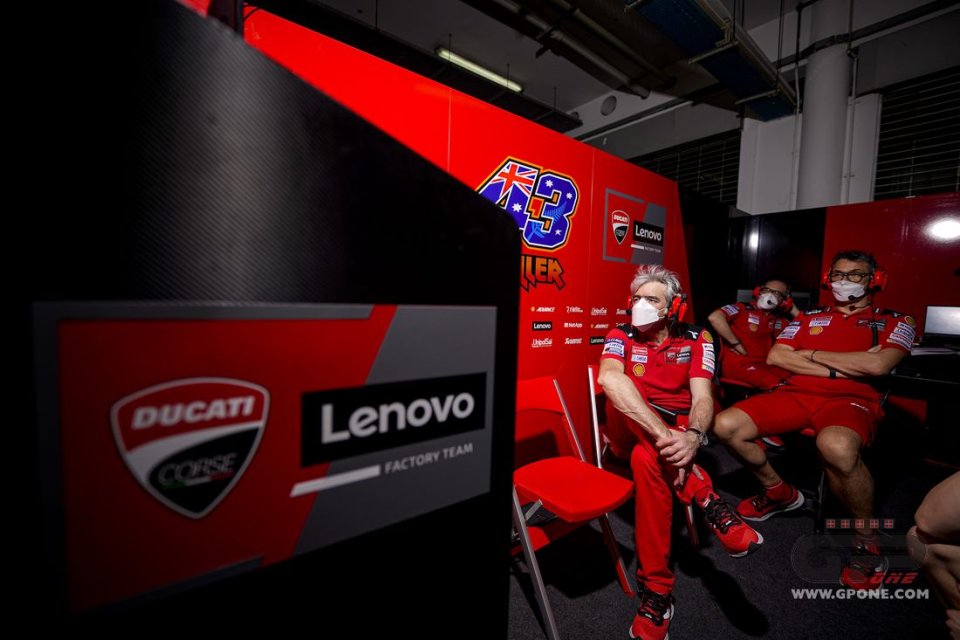 Overall an excellent result even though Gigi Dall’Igna stressed that his squadron was not in Malaysia searching for times.

“The focus was not on the times but on the work to be done - the Ducati Corse boss specified - We started the development of the new bike on Saturday and I am quite happy. There are obviously some areas we still need to work on, but the direction is clear. The next test will be in Mandalika, Indonesia, in a few days and it will be important, because it is the last one before the start of the championship. "

Ducati has made a big commitment by deciding to field eight bikes, but this seems to be the least of Dall’Igna's concerns.

“We have already had eight bikes on the grid in the past. It is only a question of organization, and organization is not a problem. From a technical point of view, it is important, because in this way we will have a lot of data and above all statistics. Then during the races, we will get a lot of information from different riders, which is very important. At the moment I don't see any problems, and the teams are happy”.

However, there is also the new electric MotoE bike that will debut in 2023.

“That is a completely new project for Ducati, but it is a project that involves not only the men of Ducati Corse but also those of Ducati Holding, which is an active part of the project. The bike is fine at the moment, after the first test at Misano with Pirro. Everything is under control. The MotoE has dedicated people and a development that goes on independently. Other parties require expertise and help from the MotoGP group. The two projects evolve almost autonomously; I will tell you during the season if the situation will remain the same. It is an interesting project due to the technology and imagination that a designer can have by developing something completely new which is an electric motorcycle ".

Ducati did well overall in this first test of the year and confirmation also comes from Bastianini's record time.

"Regarding Enea, it must be said that he was fast on both the first day and the second. Sometimes it is important not to have to develop anything and to start with a bike that does not need to be developed. Enea did excellent runs, and also on the second day he showed not only speed, his pace was also excellent. We will try to give him maximum support. Upgrading to the 2022 bike? Not everything is possible, for the engine it is not possible”.

However, the GP21 confirmed to be the best bike of the lot.

“We are certainly happy with how the 2021 bike behaved, but we have shortcomings in some areas. For example, at Assen we had problems entering the fast corners, which is one of the areas where we have developed the 2021 bike ".

"It is essential to develop the bike in all areas, obtaining the best compromise"

Can you tell us, among everything, which is the most important area on which to focus development on a motorcycle?

"For the future? There isn't a more important one. It is necessary to develop the bike in all its aspects, engine, aerodynamics, accessories, and we in the racing department are also involved in all these aspects. Different people have to do different things. Everyone in the future will develop all areas of the bike. The important thing is to always have a good compromise between the various areas ".

“For the moment the best compromise has been the GP21. Obviously, the last one is always the best bike that is possible to do".

It seems that in recent years there has been a focus on the details.

"It is always difficult to talk about individual aspects. The 'ride height', the so-called lowering device, is a new tool, everyone has worked hard on it ".

Is it possible to explain how it works? Here it seems that you have worked on an advanced version that lowers the entire bike.

“We can't go into detail and explain what we did on the bike, at least until we see the others do the same! (Laughs) ".

Maybe it's easier to get you to say something about the riders: Bagnaia is the one who will aim for the title?

"At the beginning of the year it makes no sense to indicate one rider or another. It is important that everyone starts at the same level. Then sometimes the situation changes at the beginning or during the season. If I can, I will support everyone in the same way ".

Speaking of the work that everyone is doing on accessories: Aleix Espargarò said about the lowering device that riding having to think and operate all these accessories is becoming dangerous.

“The riders, all of them, have to be concentrated, but they have a margin. F1 drivers do much more during a Grand Prix. It is true that riding a motorcycle is not the same thing, but our riders do not comment on the management of the various systems in this way ... in any case you can decide not to use them, certainly losing performance, but the bike works anyway ".

Apart from details in which macro-areas does the new GP22 need more development?

“We have to work on the controls part: carburation, engine management. There we can still do a lot; we have room to do a little better than what we saw at Sepang. "

Let's go back to what Bastianini did here in Malaysia with the GP21. Enea said he wanted to aim for the top five positions in the standings.

"Pecco was in incredible form at the end of last season"

“Enea is proving he can finish the season in the top five. He lapped well and not just in the flying lap. His race pace is interesting. Last year his problem was the first laps and qualifying and here he made progress. I think this year we will see him go better ".

In the Sepang tests you finally pulled out some of the new things you had in the freezer, after two seasons without being able to make any updates. Do you still have something in the fridge?

"I would like to have frozen the version of Pecco from the last part of the championship to be able to pull him out for the start of the world championship: he had incredible form. Seriously, freezing development again would have been a mistake. All our opponents have now made important steps forward, stopping is never the best way. You have to do your best and encourage everyone involved in the project. The objectives are not achieved by standing still”.

The calendar for next year has been set and will be made public today. After Kazakhstan, another country enters the World Championship.
4 hours 53 min ago

Pecco will have to watch out for teammate Jack Miller triumphant in Motegi and eager to score another success, the fourth in his career in the...
23 hours 27 min ago