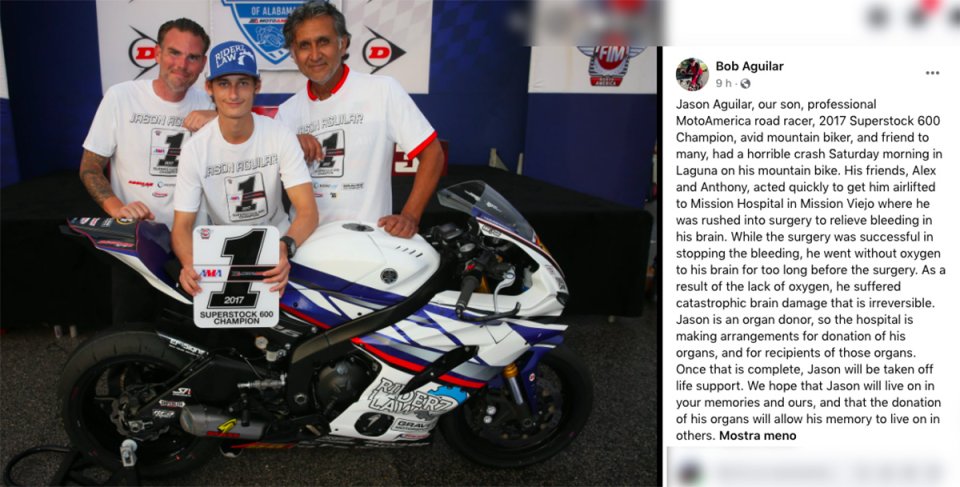 Some very bad news has just come out of the US regarding Jason Aguilar, a promising young American who was building a brilliant career in MotoAmerica after winning the Superstock 600 title in 2017. Jason was the victim of a mountain bike crash on Saturday morning and although friends who were with him quickly came to his aid, the brain haemorrhage caused by the fall proved impossible for doctors at Mission Hspital in Mission Viejo to treat.

The sad announcement was made by his father Bob Aguilar, through a post on his Facebook profile. The GPone editorial staff offers its condolences to Jason's family for this terrible loss.

These are the words of the pilot's father:

"Jason Aguilar, our son, professional MotoAmerica road racer, 2017 Superstock 600 Champion, avid mountain biker, and friend to many, had a horrible crash Saturday morning in Laguna on his mountain bike. His friends, Alex and Anthony, acted quickly to get him airlifted to Mission Hospital in Mission Viejo where he was rushed into surgery to relieve bleeding in his brain. While the surgery was successful in stopping the bleeding, he went without oxygen to his brain for too long before the surgery. As a result of the lack of oxygen, he suffered catastrophic brain damage that is irreversible. Jason is an organ donor, so the hospital is making arrangements for donation of his organs, and for recipients of those organs. Once that is complete, Jason will be taken off life support. We hope that Jason will live on in your memories and ours, and that the donation of his organs will allow his memory to live on in others.".