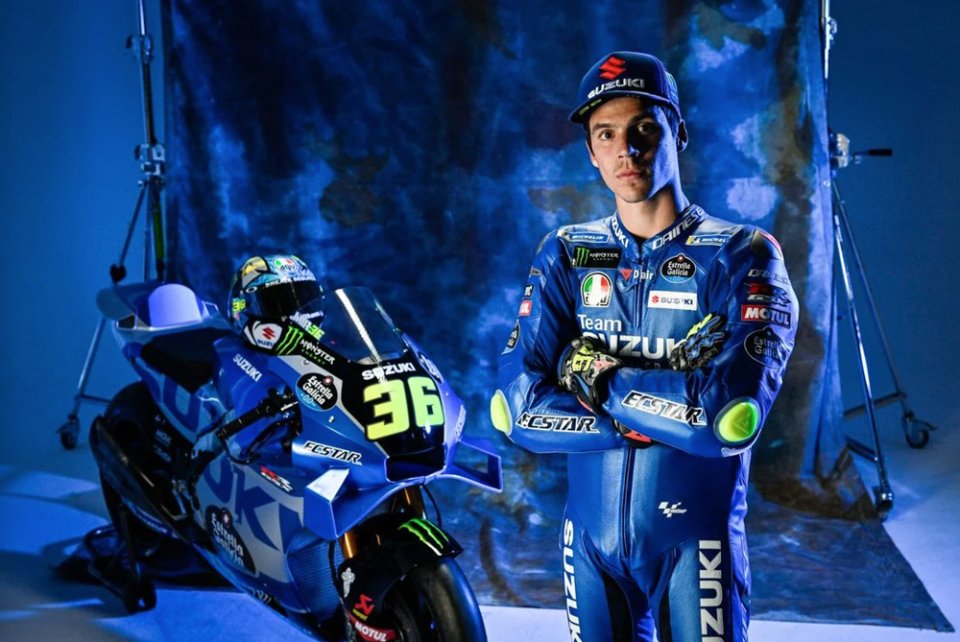 It cannot be said that Joan Mir's 2021 was a bad season, given the final third place, but the Suzuki rider was unable to defend his title and the worst thing is that he did not even win a Grand Prix.

For this reason, at the presentation of the team he appeared very motivated. This probably depended on having seen the Hamamatsu manufacturer very active in attempting to make up lost ground.

“Suzuki wants the title now. They have more pressure because in 2021 we won the world championship, not only podiums - explained Mir - They want to win again. Last year Suzuki realized it hadn't improved as much as its rivals, so over the winter they redoubled their efforts. I saw the difference when we got here: there are many more things to try ”.

Was it a surprise last year to not be competitive?

“They realized this in the middle of last season. It's not that they hadn't worked and that the others had worked harder and the Suzuki engineers didn't like this ”.

What makes you think that the bike has improved this year?

“Well, it's too early to say, but I think they've worked a lot because there are some new things that should be interesting. This track is particular because some riders here are very fast, but then on other tracks they struggle. It seems that Suzuki has worked harder than I expected ”.

From your point of view, what have you done to improve?

“Obviously we are a team and everyone works in their own area. In my case I have to be physically fit and it's not easy because we riders can't train with MotoGP bikes. We use other bikes, but when you switch from motocross to MotoGP or vice versa it's a disaster. You're shattered because you work with different muscles, in a different position. I worked a lot this winter, and in any case, I am motivated and hungry ”.

Your weak point is often pole position and reaction at the start.

“Yes, the first lap is my weak point, but at the end of the championship I improved… it's not my strong point, it's true, but it's not the strong point of the bike either. At Portimao and Valencia, however, we improved. This year the goal is to show our true potential, and not go backwards. A question of reaction times? No, I don't think you can work on reaction times. Part of training is to train your reflexes. In the gym you can do something, but there's nothing like riding a motorcycle ".

Do you feel a lot of pressure in this preseason?

“The pressure is the same. I always have to prove that I'm one of the best, but that's the way it is for everyone! You must always give 100 percent, and above all, not make mistakes. That’s the pressure: not to make mistakes ”.

Have you changed your approach to racing, perhaps?

“No, my mentality hasn't changed. At the start of the season we start from scratch. It was like this in 2021 and it will be the same this year. Last year was not bad because we finished third, but I don't want to finish third again! ".

Another Suzuki problem is top speed. What can be done?

“The rider can't do much on the straight. You can work on quickly lifting the bike out of corners and opening the throttle as soon as possible. Things like this, but on the straight it is the bike, the engine that has to push. Suzuki has worked in this area, now I don't know if I'll be able to overtake some Ducatis on the straight, but we will certainly be faster ”.

What do you need to win the World Championship again?

“To win the world championship, everything must be one hundred percent: you and the bike. If something is missing you can't do it. Sometimes the bike gives 60% and the rider 40%. Other times it's the other way round or maybe more. It is a combination. What was missing in 2021? Judge for yourself… ".

Who is or who are the riders to beat?

"Fabio is the champion and he has the privilege of being the man to beat, then there are a couple of other riders: me, obviously and then Pecco who was really strong in the last phase of the season. Then there is Marc who is back and has always been strong. There will also be some surprises, some Ducati riders… it will be a more unpredictable world championship than usual ”.

All the managers are saying that everyone will soon start talking about contracts.

"It is still early. Some riders are out of contract. Tests will be important in understanding many things. As a Suzuki rider, I feel good, I'm at home, but it's true that changing at some point can be a good thing. Today, however, nothing has yet been decided ".

What is the bike that worries you the most?

“Well, Ducati is the manufacturer with the most bikes on the track, and it's not the one you want to have in front during Grand Prix races”.

The official announcement came today. The rider from Ascoli: "I have no expectations other than to return to a serene and clear climate inside the...
18 hours 26 min ago

This is the first MotoGP pole for Honda since Pol Espargaro at the British GP last year (21 races), ending the longest sequence of successive premier...
23 hours 20 min ago