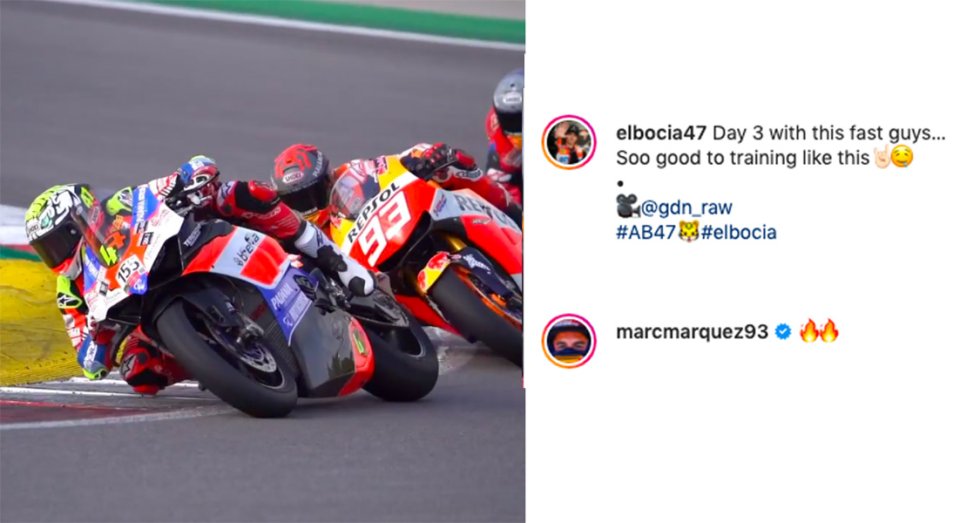 Axel Bassani started 2022 in a way that was certainly difficult for him to imagine. The Motocorsa Team rider in SBK and revelation of the 2021 World Championship made his first appearance on the track this year by opting to do a three-day session at Portimao on a Ducati Panigale V4 Superstock version, to regain confidence with the curbs after the winter stop but on the track he found himself crossing his own lines with Marc and Alex Marquez.

It’s something that certainly doesn’t happen every day, with Axel who wanted to post the images of himself on the track with Marc while tackling the Portuguese circuit, also picking up an amused comment of Marquez himself on his Instagram profile. We decided to have a chat with Bassani about it, when he returned home after this first outing on the track.

"I was at Portimao to train alone, to start the season on the track - Axel told us - to get rid of the winter rust, I was on a stock bike as per the regulations. Three days of training on a track that in my opinion requires a lot of experience, because it is difficult to interpret it at its best. I will probably return there in February for tests with the SBK bike, but I still don't have 100% official confirmation."

We are curious to know more about your encounter with Marc Marquez on the track. How did it go?

"It was a good experience, because it doesn't happen every day to lap with riders like that. It was fun and nice, because seeing what lines they make, Marc and Alex, was nice. We caught each other on the track a couple of times, we even looked at each other but nothing more. I then continued with my work, my runs and he too with his. But we did a few laps together. It was a blast, something like that doesn't always happen!".

How did Marc look on the bike, what idea did you have of him?

"I can't say if he's always the same Marquez, also because I've always seen him from off the track, like everyone else. Then it was also his first outing after the winter, just like for me and his brother. We were all calm and happy to get back on the bike. As far as I could see, I saw him calm. I certainly can't assess his condition, I'd just be saying bullshit. It seems that he will be in Sepang, and this already looks really good for him. He was happy to get back on the bike, I was after a month and a half so I can’t imagine how he felt with everything he's been through. It was great fun for everyone ".

Instead, what's coming up for you? Will the updates you deserve come on the Panigale V4 you will use in the world championship?

"I don't know what updates I will have in 2022 on my bike, Mauri of Motocorsa is working on it. In the garage we are working on what I need on the bike to be completely comfortable, then we will see what we will have at the first tests and above all we will see if what we are feeling on the bike works. I think the fact that we have been together for a year can help us a lot, we don't start from a blank sheet but from a basis we know well. I'm confident, the team is energized and we hope to do well ".