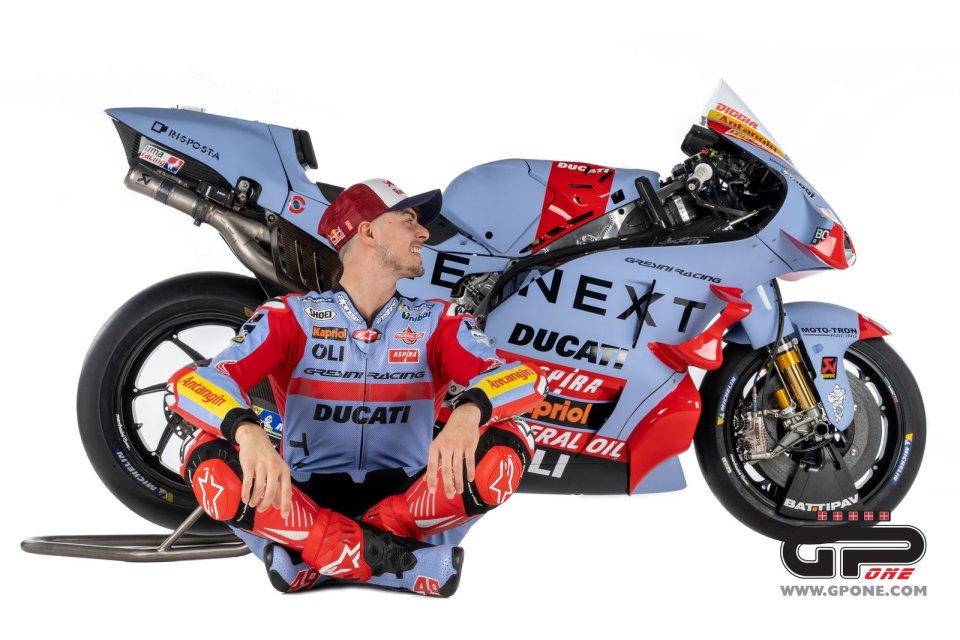 Fabio Di Giannantonio’s new MotoGP adventure begins under the family roof of the Gresini team. It was Fausto who wanted him in the premier class and the rider from Rome doesn't want to disappoint him. "Fausto had believed in me from the start, since my Moto3 debut - he remembers - We got the first results together, we raced together in Moto2, so it's something special. We have everything to do well and this gives you an extra boost, we can take this family to the top ".

What is Fausto's teaching that you do not forget?

"He always told me to enjoy myself and I understood the importance of this advice growing up. When you are little you have a lot of enthusiasm and you don't see many things, but this sport also has its negative sides, there is a lot of tension and it is very tough mentally. If you lose the fun, you also lose polish on the track. He told me to enjoy the moment, everything that happens, because it's a great thing and if you take it in the right way everything is easier ”.

Is it easy to have fun on a MotoGP bike?

“I'm very happy, the pressure is relative. In our sport you have to do well, or go home, but this year will be an apprenticeship for me, everyone tells me. At the same time, it is I who put pressure on myself, I want to achieve results ”.

Nadia expects you to fight to be the best rookie of the year. You will have to contend with Bezzecchi, Gardner, Fernandez ...

"And what’s the problem? (laughs) We have grown together since Moto3, we have clashed and beaten each other several times, it's nice to keep doing it in MotoGP. Goals are needed because they are the ones that allow you to raise the bar ".

There are those observers who claim that you arrived too early in MotoGP.

“It's always really nice to hear certain comments (laughs). I have a folder with all the things the haters say, every now and then I read them when I do well (laughs) ".

Do they somehow motivate you?

“They don't have any effect on me one way or the other. I'm 23, I’ve arrived at the best moment of my MotoGP career. It is always thought that results are the key to moving forward, but sometimes a rider has not been put in the right conditions to achieve them. Before, people spoke badly about Quartararo who had arrived in MotoGP by winning only one race in Moto2, like me, now that he is world champion they say he is a phenomenon. You don't have to look only at the statistics, I feel as fit both physically and mentally as ever ".

Do you also think you are on the best bike possible?

“Yes, I'm in an ideal condition for my debut. I have a great bike, world constructors’ champion, the team is fantastic, I like everything ”.

How much did you think back to the first test on the Ducati this winter?

“I often think about it so as not to forget those feelings. I felt really great, for sure I was not the fastest on the track, as is normal, but I felt crazy sensations, like on no bike before. Every now and then I try to remind myself, I can't wait to ride it again ”.

Did those three days in Jerez help you figure out where to work?

“In truth, they helped to rev me up and let me lap, right now the limit is me because I still have to understand so many things. Compared to Moto2 and Moto3 it is another sport. I think I'll do the same in Malaysia, and then start working on something more specific ”.

Will Bastianini give you a hand?

“We are professionals and he will be focused on himself because it will be an important season for his future. But we have a good relationship, we talk often and we also discuss things outside the sport. I'm sure that if I need a hand, he will give it to me ”.

Are you a bit disappointed to be on the Ducati and not use the number 21 of your idol Bayliss?

"A little bit yes, I feel it is so much mine. However, 49 is a tough number, no one has ever used it in MotoGP and I already feel it mine ".

You will have 7 days of testing before the start of the championship, what do you expect?