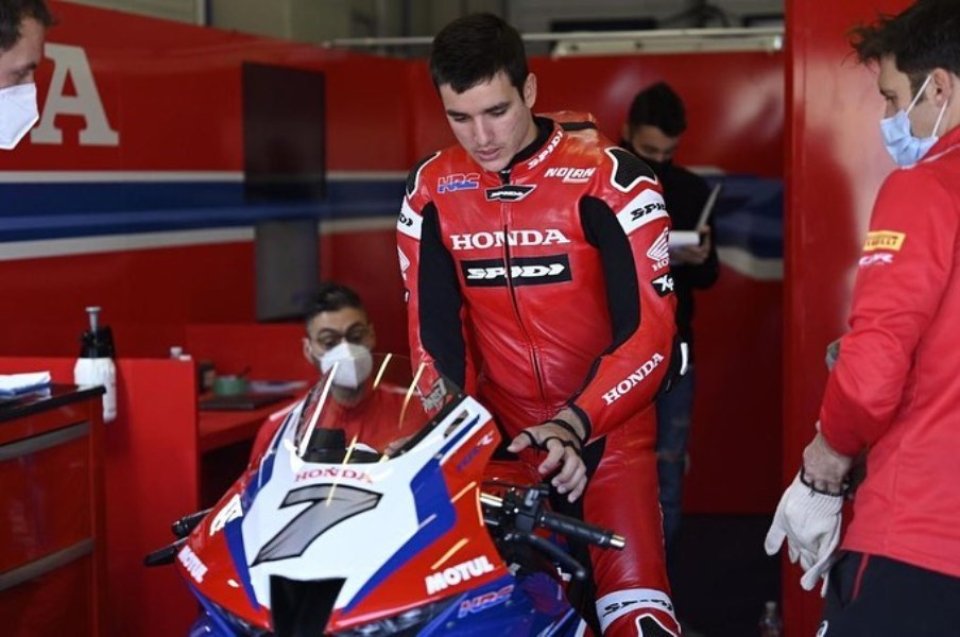 It has been a day of announcements and interviews at Honda. In the morning it was the turn of the MotoGP riders, while in the afternoon it was the turn of the Superbikes. 2022 is the year of the relaunch for HRC, which has decided to entrust the CBR 1000 RR-R to the two new faces of Iker Lecuona and Xavi Vierge.

The first comes from MotoGP and wants to show his potential after his last experience in Tech3 went in a different way to what was expected. As we already know, the Spaniard tested the bike at the Jerez test last December and is now looking forward to starting the championship.

“I really like big bikes - began Lecuona - I have to say that the Honda SBK is completely different from the MotoGP. There are a lot of things to revise, as I have to readjust my lines on the track and work hard for the next tests. There are therefore several aspects to consider, such as the tyres, which are different from the Michelins. In the next test in Jerez, however, I will try to do as many laps as possible with the aim of having fun and learning everything required. "

Iker what are your expectations for this 2022 season?

“The bike is not ready to win the World Championship, but we can definitely improve and grow. Both Xavi and I are young ambitious riders, to bring our experience to this project. The first step is to adapt quickly to the CBR, as it is different from the MotoGP. I will therefore have to focus on myself to improve and give everything when I get back on the bike. For sure we have a tough 2022 ahead of us, given that there will be three races in Superbike over the weekend ".

How big do you think is the leap from MotoGP to SBK?

“I think I am one of the youngest riders in this category and I will have to learn a lot in the shortest time available. Here in Honda I felt what it means to be in a factory team and I will have to start from scratch, forgetting that I was a MotoGP rider. In MotoGP, just to give one example, you use electronics a lot, while here it's completely different. However, I am aware that I have great potential at my disposal, aware of the fact that I will be racing on tracks that I know well ”.

You are now a factory rider, which involves burdens and honours…

“Here in Honda I found out what it means to be in a real factory team, since in KTM I simply had support from the factory team. When you enter the garage you have all the engineers next to me to listen to me and later to discuss things with me. It is a special sensation, never experienced before ".

Iker, on the technical side, what changes between MotoGP and Superbike?

“Here in Superbike we have a bike with a standard engine, while the MotoGP is a prototype. Then there are the tyres. After the first test I realized that the Pirellis lose their grip very quickly, they tend to slide on the straight unlike the Michelins. Furthermore, the SBK chassis is lighter and as a result you feel the movements much more. I think the SBK is harder than the MotoGP bike, both in braking and in engine power ”.

Unfortunately, during the December test, you came home with a broken finger. What is the situation now?

“Today I feel better and in a week I'll be back on the bike training. I tried to keep fit during the holidays in order to be ready for the next appointments ".

One last comment: do you think Honda will also take you into consideration if Marc needs to be replaced?

“I can't say anything about it, as I don't know anything. My manager has never spoke to me about this possibility, even though I have read a lot about it in the media ”.

VIERGE: "HONDA WANTED TWO YOUNG RIDERS WHO CAN PUT IN A LOT OF ENERGY"

The floor was then passed to Xavi Vierge.

“We did a first test in December and I was impressed with the bike and the amount of work - said the Spaniard - we have a really challenging winter ahead, because we have so many things to test. The Honda's power is incredible and the priority is to do as many laps as possible to understand the CBR more and more. Superbike is a completely new world for me and I have to understand a lot of things ”.

In recent years, the Championship has been experiencing a real rejuvenation.

“I think World Superbike has reached an incredible level, but in the end we all know Honda's potential. We do not set ourselves goals, but we are simply focussed on the work to be done to be ready for the start of the season ”.

“In Superbike we will have three races over the weekend and this will be a big challenge, considering that the bike has grown a lot and has also finished on the podium. We must therefore continue to improve the CBR, without overturning the good things done in recent months, given that the Honda managed to fight for the podium at the end of 2021. Obviously one of the priorities will be to be competitive as soon as possible to fight for something important ”.

How big do you think the leap from Moto2 to SBK is?

“Superbike is undoubtedly a step forward, even if there will be lots of new things to deal with. The first test I did was useful to get closer and understand this world, where I'm riding a bike with a lot of potential ”.

You and Iker pick up the baton left by Bautista and Haslam. How big is this inheritance?

“As you well know, this project started two years ago and Honda wants to win in SBK as soon as possible. After the experience with Alvaro and Leon, HRC wanted two young and talented riders, hungry for victory and capable of putting in a lot of energy. Both Iker and I are therefore excited for this new adventure "