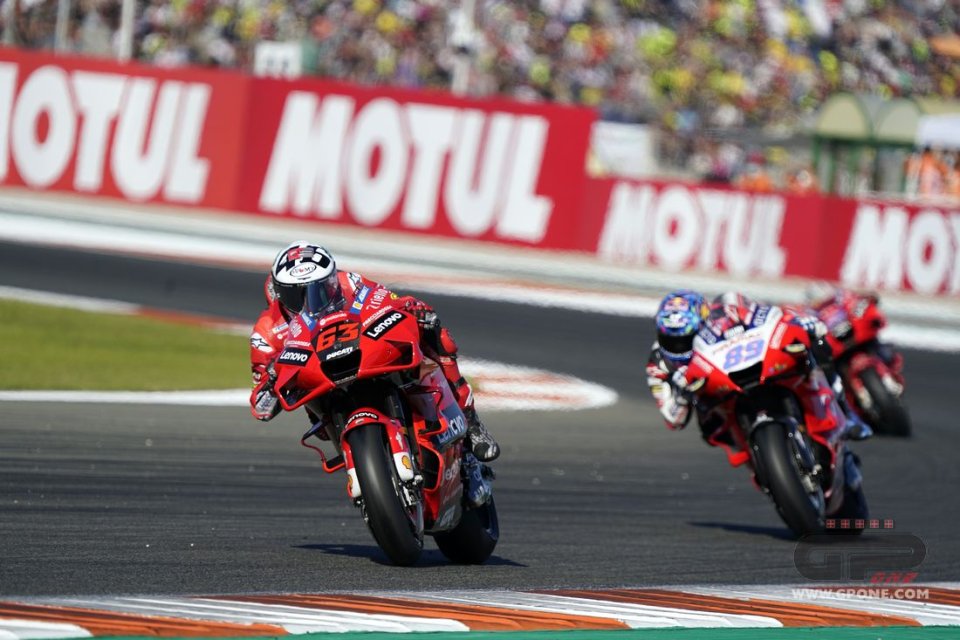 It’s very easy to know who the best rider is, all you have to do is look at the final standings of the season and read the name at the top. For the bikes, however, it's not that simple. It is not necessarily the case that whoever wins the title also has the best bike (any reference to Marc Marquez in recent years is not purely coincidental), because a competitive bike must be in the hands of as many riders as possible, not just one.

It is now common opinion that the Ducati is the best bike on the grid. The constructors' title might be sufficient to prove this, but there are other numbers that show how the Desmosedici was a benchmark machine for everyone last season. To understand how fast a bike is, it is said that one must look not at the results of its best rider, but at those of the second rider, but in this sense in Borgo Panigale they are only spoilt for choice.

In 2021 the ‘red’ bikes achieved seven victories (more than a third of the total) but above all they put three different riders on the top step of the podium: Bagnaia, Martin and Miller. Looking at the podiums (24 out of 54 available) it gets even better, with five different riders (out of a total of six) who achieved the goal. Zarco and Bastianini are added to the first three, the latter with an updated 2019 bike, a sign that the Desmosedici has been a benchmark for the category for years. Even over a flying lap, the Borgo Panigale rocket-ship made all the difference with 11 pole positions out of 18 and 3 different riders able to start from the first slot. If we then look at the number of front row starts, all the riders started at least once from that position.

So the Ducati was the best bike, even though it was not the one that won the riders' title. On the other hand, Yamaha succeeded in doing so, but they had to rely only on Fabio Quartararo. It was not an easy year for the M1 for various reasons: the mid-season divorce with a disheartened Vinales, Morbidelli who had started the championship with a outdated bike and who was then injured, Valentino down in tone for the entire year. The result is that the Frenchman bore the weight of the entire championship on his shoulders, even though Maverick proved that the M1 was competitive by winning one race and starting from pole in another. Franco, on the other hand, had to be satisfied with a podium.

All in all, compared to the Honda, it still went well. The Tokyo manufacturer once again proved itself to be entirely dependent on Marc Marquez, the only one who truly managed to get the best out of the RC213V. Despite his physical condition, he took the bike to victory three times, plus another podium. Newcomer Pol Espargarò was never at his level, with the exception of a podium and a pole which seemed more flashes in the pan rather than any signs of improvement. Worse still fared Alex Marquez and Takaaki Nakagami, who never once appeared in amongst the positions that matter, either in qualifying or in the race.

The numbers are ruthless even with the Suzuki, which in 2020 was hailed as the most balanced bike on the grid. The GSX-RR, however, failed to keep up and did not even score one victory or a pole last season. Mir was responsible for salvaging what could be salvaged, with 6 of the 7 podiums, while Rins was little more than a walk-on extra.

KTM also underwent a major U-turn, but at least it had the consolation of winning two races: one with Oliveira and the other with Binder, the same ones who managed to get on the podium with the RC16 in 2021. The Tech3 team, protagonist in 2020, vanished into thin air, with Petrucci never finding the right harmony with the Austrian bike and Lecuona being put to one side perhaps too quickly.

Only Aprilia is left, but it was able to celebrate its first podium since its return in official form. At Noale they had to focus everything on Aleix Espargarò, while the arrival of Vinales during the season did not produce any immediate results.

Now it's time to think about 2022, the engineers are hard at work and in the Sepang tests it will be seen if their efforts pay off. The goal is to catch Ducati...