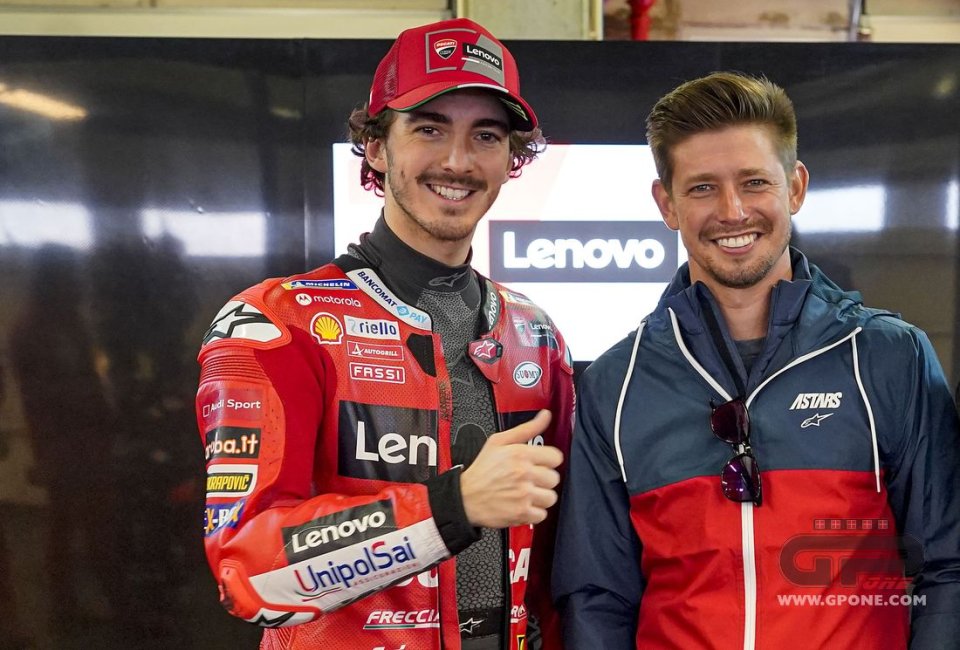 Pecco Bagnaia is enjoying a few days of rest and relaxation in New York with his girlfriend, Domitia. A vacation before throwing himself headlong back into the coming season and for which expectations are high. In 2021, he just missed getting the title, due to a not very exciting start of the year and a few stumbles (i.e. errors and problems) too many. So, the Ducati rider from Piedmont will start 2022 with the awareness of having to immediately play a leading role, but he doesn’t feel the pressure.

“Fabio Quartararo will be. He’s the one who won the title,” he stated in an interview with La Stampa. “He’ll be the man to beat, the great opponent to fight against. In 2021, I made some mistakes, there were some problems, all things that must not be repeated. Also, Ducati has never put pressure on me. There’s harmony, and this makes me feel at home.”

The Rossa has always been Pecco’s dream, since he was a child, when he was enraptured by the sound of his uncles 996.

“I don’t know if fate exists, but I knew my place was in Ducati, and I was lucky because they believed in me,”  he said. “I still remember that noise. It represented a dream, and now it’s become a reality. I hope this will last a long time, I really hope so.”

Ducati fans have been looking for their idol for some time now – 14 years in in the MotoGP – because no one has been able to win on the Reds after Stoner. But Bagnaia has a really different character than Casey, and also riders like Bayliss and Fogarty, two Borgo Panigale flagships in the SBK.

“I’m different than Stoner or Bayliss, but we’re all riders, and we all have the same goal. To win,” he explained. “The competition is certainly different from everyday life. Talent is that form of madness that allows you to give something more, it leads you to win. In motorcycling, it has always been the protagonist, even if the races have increasingly become an athletic performance in recent years.”

Pecco also spoke about his relationship with Valentino Rossi.

“My idol since childhood who has become a mentor and friend,” he explained. “He followed me in all my choices, in my career, helping me in many situations that he had already experienced. With the Academy, he saw my desire to reach the top and gave me a chance.”

But there’s another key element in Bagnaia’s world: his family.

“Thanks to my girlfriend, Domitia, my parents, and my sister, Carola, I always carry a part of normality with me. It’s something I need, and it makes a difference because I’ve always been very attached to my family. It helps me remain calm,” he concluded.