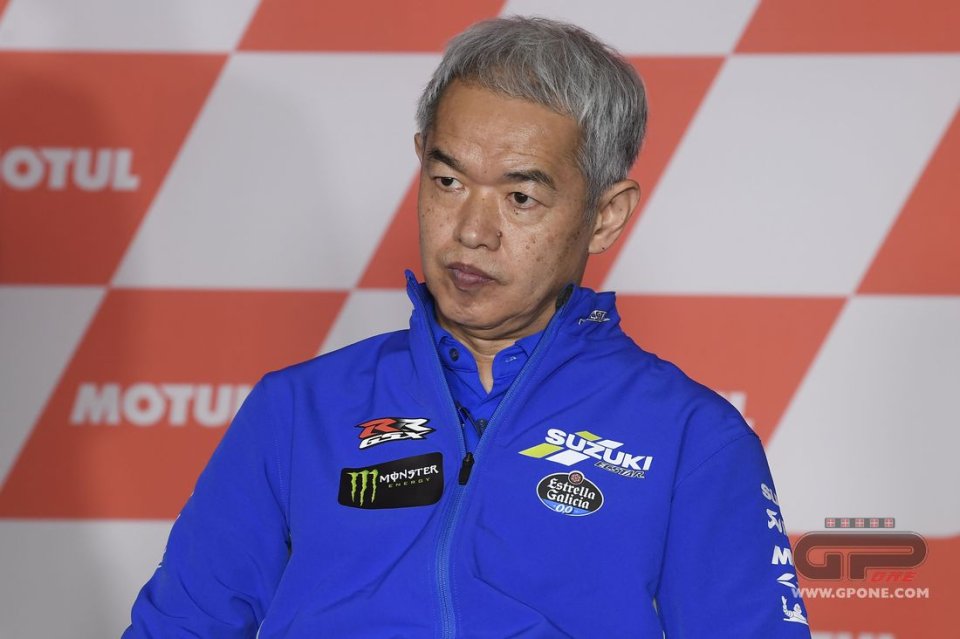 After winning the title in 2020, this season hasn't gone quite as well for Suzuki. Joan Mir failed to defend his number 1 and the Yamaha and Ducati were head and shoulders above the GSX-RR. After all, 2021 began with Davide Brivio bidding farewell and Shinichi Sahara, the project's technical manager, also having to take on the role of team manager. A double commitment that influenced the results, as he wrote himself in his blog.

“We’re at the end of a long and demanding season and I would say that, despite not getting quite the results we were hoping for, the year was around 60-70% what I expected.

“2021 was different for all of us, coming off the back of winning the title, and Davide Brivio leaving, we all had to step up and find the way forward. I had previously been the Team Director, mainly managing things from the factory in Japan, but in 2021, I took on a new role as Team Manager and Project Leader. This workload, coupled with still being the Group Leader in the development department in Japan, was way too much. But on the other hand, I learnt a lot, and being at the race tracks more has given me a unique insight that I didn’t have in previous years; I’m able to notice every detail on the GSX-RR and how it behaves on the track.

“Last year I was only at one track – Portimão for the season finale – and I wish I had been at more races to check how it was all going, because I wasn’t able to get a true understanding of our 2020 machine. When we started this season I couldn’t really compare the two bikes.

“In that same vein, attending all the races this year will be beneficial for next year, I think. I am really familiar with our bike now. Attending all the races hasn’t only been beneficial from the technical side, but also from the human management side of things. I have communicated with many people in the paddock in 2021, much more than before. Of course I already knew most of them but having direct communication with them face-to-face allowed us to get to know each other better than via emails or video meetings.

“Even within our own team, I have become much more familiar with all the work that each team member does. This has been most evident with the marketing department. I don’t think I really appreciated the complexities of their job until now! They are very creative and always pushing, they are constantly coming up with new ideas, not just every week but seemingly every hour. This side of our project was new to me; marketing, commercial and sponsorship – it’s a huge responsibility and I learnt a lot from the deep end!

“I think one of the hardest parts of stepping into the new role this year has been the lack of having someone to discuss the big things with. When I was based remotely in Japan, I felt I could see the big picture and offer good advice, but when you’re on site and surrounded by everything it can be hard to take that step back and look at things objectively, and this is where I miss the role of someone to discuss everything with.

“On the other hand, I have felt a lot of help and support from all the team members – not only from the Crew Chiefs or the management figures, but from every member. They all tried to help me and support me throughout this season, and I really appreciate that. Overall, I can say, in terms of team spirit, we reached my expectations, we just lacked a bit in terms of results.

“One clear thing on the bike performance front, is that the step of improvement from last year to this year was not big enough – not as big as the previous year. That doesn’t mean a lack of effort from the factory engineers, they did everything that was necessary and I’m very satisfied with their work. But I think I needed to control something more, for instance the order of the jobs or items in terms of priority.

“Despite not being on the podium as often as we’d hoped, we have felt so much support from our loyal fans. I feel that Suzuki fans are different to those of any other manufacturer or team; they are special. They are so enthusiastic, so passionate, they really love us and we feel that. When the fans cheer us, even I feel that very much, so for the riders it’s another level. Before I started this job I didn’t realise the importance of their cheering; I could see them enjoying themselves and it was nice, but it was only when I started to attend more races that I understood how this cheering and support transmits to the riders, the crew, all the team. So, when we hear them or read their comments, our motivation goes from 100 per cent to maybe 110 or 120 per cent. So thank you to all of them, and let’s continue to cheer together as one! As we head into the winter break I would like to deliver a similar message to our two riders, Joan and Alex – let’s continue pushing.

“This year we managed to achieve 3rd place in the Teams’ Championship and Manufacturers’ Championship thanks to the commitment and work of both riders. Joan also managed to get 3rd in the Riders’ Championship, which was tough in a very competitive year. He has the ability and potential to win the title again for sure. He has consistency, speed, and a smart brain. He’s able to put in strong results even when luck goes against him. We’re already planning how to put all those elements together again for 2022 and we trust in him completely.

“Alex is a totally different rider, and this season has been tougher for him. When he is switched on, he is one of the hardest riders to beat - he has big potential and speed, but sometimes he seems to struggle to turn that switch on. He always has a lot of motivation pre-season and during the start of the season, like we saw this year, he was very fast at the beginning. But when he has a crash or a mistake that costs him, it seems to spiral and he struggles to get back into the swing of things. We need to work with him because, when we find the way to activate his switch, he can be unbeatable. So my message to both our riders is simple; we are challengers, and together we will fight to win again!”

“I was leaning too much. It happens when you push on a MotoGP. I have injuries all over my body. I’ll have to wait and understand my condition. It’s...
13 hours 20 min ago

The calendar for next year has been set and will be made public today. After Kazakhstan, another country enters the World Championship.
20 hours 11 min ago

Pecco will have to watch out for teammate Jack Miller triumphant in Motegi and eager to score another success, the fourth in his career in the...
1 day 14 hours ago

2023 marks the start of a new five-year, Kazakhstan will also become the 30th country to host a motorcycle Grand Prix since 1949
3 days 19 hours ago