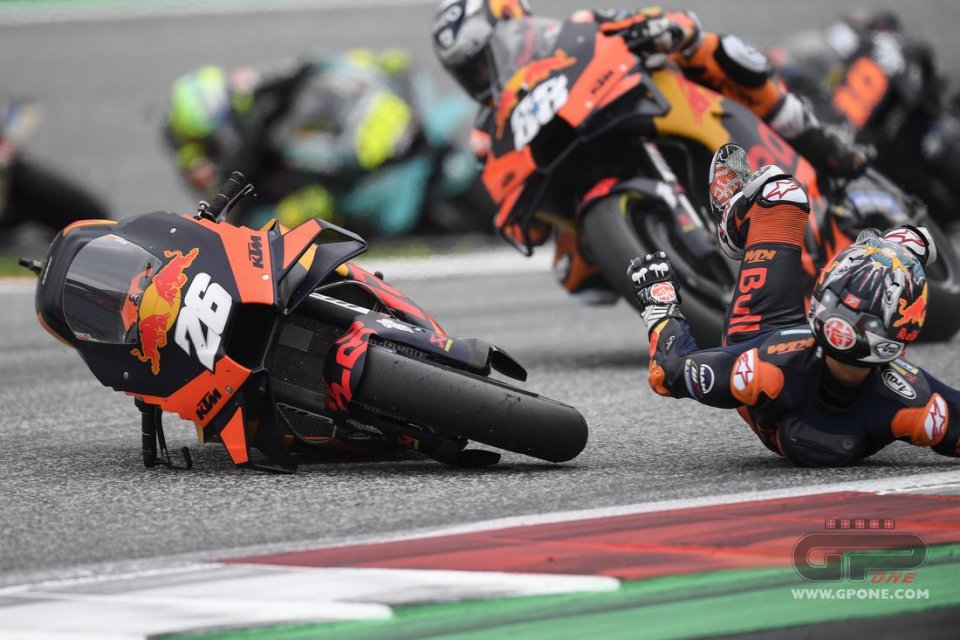 Dorna and FIM are working to improve racing safety after the three fatal accidents that sadly occurred in 2021. The various regulatory changes being contemplated include: increasing minimum age to 18, mandatory use of suits with airbags in all categories, and the introduction of an automatic fall signaling system.

The latter is, however, the most complicated to implement, and several solutions are being considered, as Peter McLaren explained in an interview with crash.net. The aim is to be able to warn riders when a bike remains on the track after a fall – like what happened this year at the Red Bull Ring, when Savadori hit Pedrosa’s bike and crashed a few seconds earlier – so that they’ll be able to avoid this risk.

In these circumstances, timing is everything, and an easily visible and especially timely signal is required. Many of you might have noticed that, in the second to last GP of the year in Portimao, the bikes raced with their red rear lights turned on, despite the fact that it wasn’t raining. It was an experiment, in order to understand how much that signal was visible to the riders. Then there are also dashboard messages, which Race Direction can send to the riders. But the first problem is how to automate these signals, because having them go through Race Direction would make them lose vital seconds.

Yet, there’s a second problem to face: what should trigger the signal? Airbag systems may transmit this signal if activated, but this may not be the best method. First of all, riders may fall slipping at low speeds, during which the airbag doesn't activate. Secondly, the airbag could activate even without a fall.

An alternative would, therefore, be to install sensors on the bikes. Bikes already have several deemed useful installed, such as those that shut off the engine in the event of a fall, in order to prevent malfunctions. These are based on the inclination of the bike, but they don’t activate immediately.

In conclusion, there are lots of ideas flying around, they just need to figure out which are the best and adapt technology to needs. For once, electronics will finally be the ally of every rider.