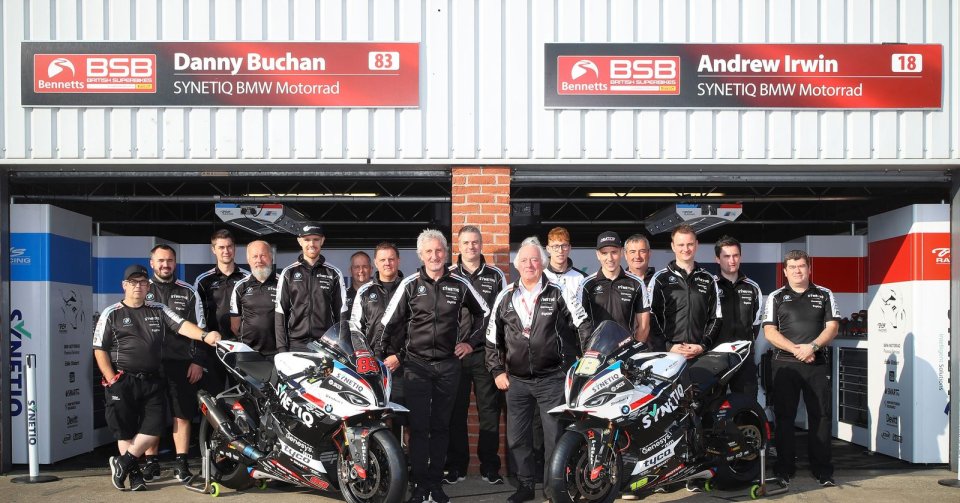 After more than five years as the Munich-based manufacturer's benchmark outfit in British Superbike, the glorious SYNETIQ BMW Motorrad team will once again rely on the duo of Danny Buchan and Andrew Irwin next season. Coming off the back of an inaugural season on the latest generation M1000RR, for the second consecutive year the structure headed by Hector and Philip Neill has decided to renew its confidence in both riders in view of 2022, in which it will definitively aspire to take the top slot.

Having arrived in TAS Racing after a prolonged partnership with Kawasaki, this year Danny Buchan was able to give the new German super sports bike its first satisfaction in the UK’s premier championship with a magnificent double in the third round at Knockhill. Despite some minor mishaps, he then returned to the podium on two more occasions, qualifying for the Showdown, and finishing in seventh place. A performance that makes the Essex rider one of the favourites for 2022:

“I’m over the moon to stay with TAS Racing and the SYNETIQ BMW team for 2022. The initial plan was always to do a second season – admitted Buchan – and have a real go at winning the title. This first season was good with race wins and podiums, but with a season of development now under our belt, I’m excited to see how far we can take it in year two with the support of BMW Motorrad and have a really good 2022. I can’t wait to get started.”

Looking for a new start following his chaotic separation from Honda Racing UK, Andrew Irwin suffered more than expected the transition from the Fireblade to the Bavarian in-line four, counting just one podium to his credit (in the wet ...) at the end of the season. With the hope of getting closer to the top positions, the Carrickfergus rider is determined to put 2021 behind him in an attempt to show his real potential:

“I’m really excited to continue with SYNETIQ BMW into 2022. There’s no point hiding or running from the fact that 2021 wasn’t my strongest in BSB, so I’ve got lots of motivation to turn that around and prove what I’m capable of on the M1000RR. Thanks to TAS Racing for showing the commitment to keep me onboard for next year, and I’m now looking forward to repaying the faith they have shown in me with a strong campaign" he said.