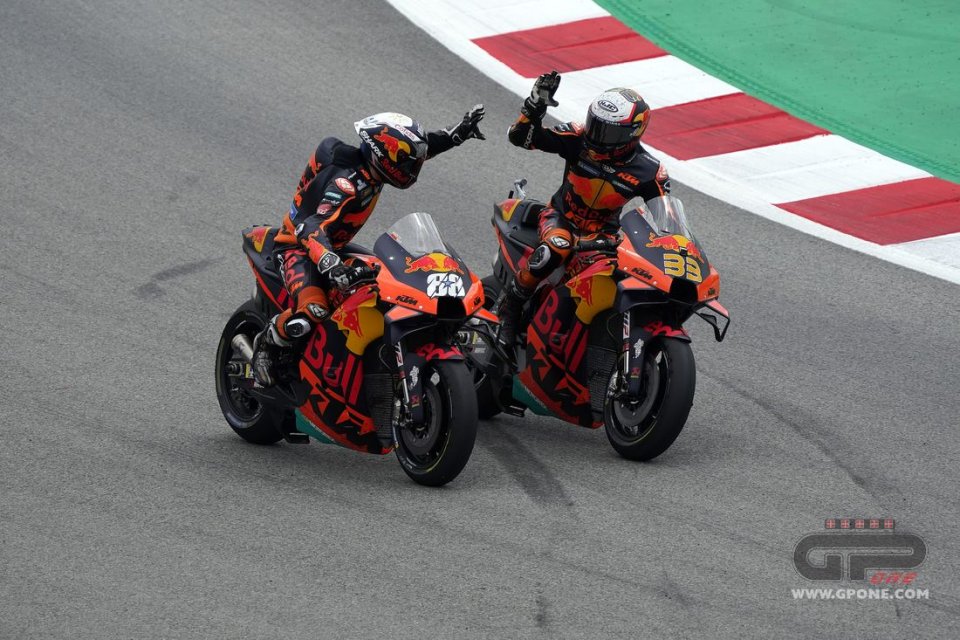 Ever since KTM entered MotoGP in 2017, the goal was immediately clear: to win. It wasn’t exactly a humble declaration, but it is absolutely true and in keeping with the Austrian manufacturer, which has dominated every single championship in which it had participated until then, whether on dirt or asphalt. The premier class of the world championship, however, is a different challenge, where you have to tackle Japanese giants and Italian companies, which may lack budget but not skills.

KTM didn’t underestimate the commitment however. It made important signings among the technicians of the other manufacturers and as a test rider convinced Dani Pedrosa, a real gem. Then, in 2019, it secured Tech3's services, snatching the team from Yamaha, and treated the French team not as a customer, but as a full-fledged factory team.

The Austrians spared no expense and were the best at exploiting the concessions, organizing test after test before the Grand Prix to accumulate data and experience. It was a great help especially last year when, with the Covid pandemic in its prime, tests for opponents were inhibited and the dates of the races moved from their usual time. Testing the tyres in advance with unprecedented conditions made the difference, and in fact the first victory came in Brno with Brad Binder, followed by two by Oliveira, to which were added four third places for Pol Espargarò.

It seemed that everything had been done and the RC16 had arrived in amongst the top bikes. In MotoGP, however, things change quickly and 2021 has not lived up to expectations. Miguel won in Barcelona and Brad in Austria (risking slicks in the wet in a flag-to-flag race), but these were two flashes in the pan.

On the one hand, Michelin withdrew the hard front tyre that the KTM riders (but only them) liked so much, while on the other hand the development of the bike seemed to no longer follow a clear direction. This confusion was also confirmed by the riders. In short, when the final step forward was required, the Austria manufacturer took one step back.

Thus the RC16 began to be snubbed by the riders. KTM actually has the best youth rider talent project: it starts with the Rookies Cup and the national championships, then moves on to the World Championship with Moto3, Moto2 and, finally, MotoGP. But those talents, having reached the premier class, want to find a competitive bike.

At the end of 2020, Jorge Martin paid the penalty out of his own pocket to break his contract and go to Ducati. This year Raul Fernandez said he will not be where he wanted to be in 2022. Two episodes that were a wake-up call.

So in Austria they began to look around to strengthen the team from a managerial and management point of view and their eyes fell on Ducati. The first to arrive in Mattighofen was Fabiano Sterlacchini, after having been in Borgo Panigale until 2019. He will be the new technical director. Francesco Guidotti (HERE is the interview he gave us a few days ago), on the other hand, will be the new team manager, thus taking the place of Mike Leitner, who opted to reduce his commitment and will probably take care of the Test Team.

Is this the right choice? On paper, yes and perhaps it is no coincidence that two Italians were poached. KTM has a lot of resources and expertise, but also a too-Teutonic, rigid mentality. So in recent years its communication has been almost absent, if not completely wrong. The latest case came in Austria, when they announced the sacking of Petrucci and Lecuona in the middle of FP4, "when we were still in our leathers" as Danilo commented.

Francesco has a great deal of experience, in KTM at the time of 125 and 250, then with Aprilia in SBK and above all with Ducati in MotoGP. His work with the Pramac team has no need to be remembered, Bagnaia, Miller, Petrucci, Iannone, all arrived in the factory team passing through his box. Martin won on his debut this year under his leadership and Zarco discovered that he was still competitive.

The Tuscan manager has a flair for riders and knows how to put them in the best conditions, as well as knowing how to create a serene atmosphere in the garage. All qualities that KTM need. As well as a communication ability that the Austrians have lacked in recent years. With Sterlacchini, who will lead the technical side of things, the pairing is well balanced.

As always in these cases, one cannot think that everything will change overnight. 2022 will probably be a running-in season, but then they will have to win. KTM's only goal.