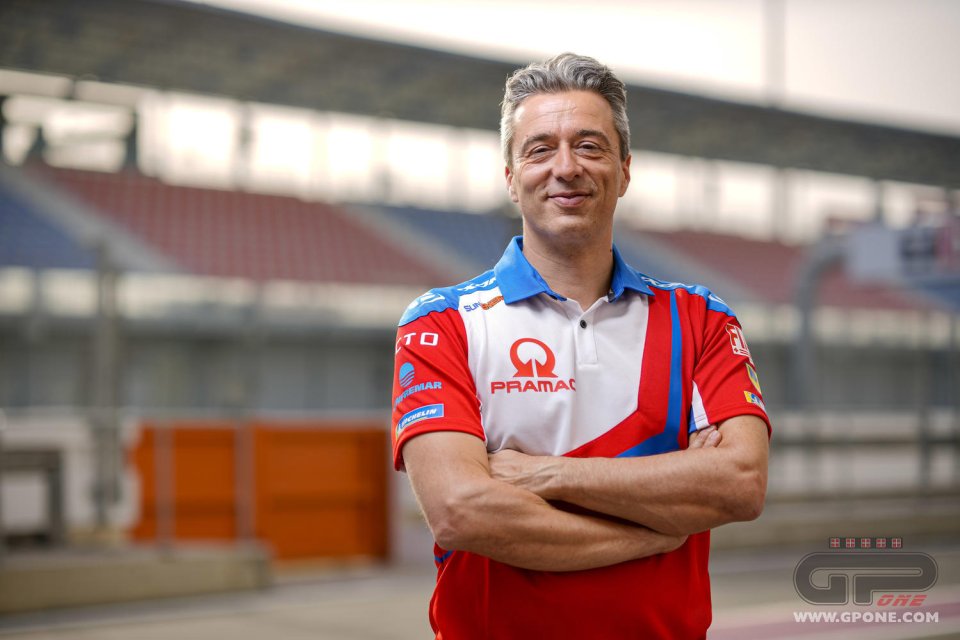 The past was red, the future is orange. The colour of Francesco Guidotti's team outfit will change in January and it is a return to the past. The Tuscan manager had in fact already been in charge of KTM's 125 and 250 projects and has now accepted the Austrians' offer to run the official team in MotoGP.

Francesco, you used to ferry the riders from the satellite team to the factory one, now it’s you who is making this leap…

"It was about time! (laughs) I don't put myself at the level of the riders, they really make the difference, but now it has happened to me. To tell the truth, I wasn't searching for it, but when the opportunity arose I felt a fire inside, I said to myself: it's my time, I'll start all over again. Already from the first contacts I felt in a family environment, which I already knew, I immediately ticked off all the doubts about what I would find. I know their ambition and the strength with which they want to get there. I know it’s not going to be easy, I will have to get back into the game but I’m living this situation with a lot of determination ”.

What idea did you have of KTM from the outside?

"From the beginning I had a lot of respect for them, because they wanted to put themselves in a very different context from those that belonged to their history, they had never even raced in World SBK, in a championship with large-displacement bikes. This respect has increased because of their technical choices regarding chassis and suspension, they reminded me of what Aprilia was in the early ‘90s, when it challenged the variable intake Honda NSR with its rotating disc one, which on paper now seems outdated. That strategy came to me, that desire not to do things like the others but to take their own path, without abandoning what identifies it as a company. In my opinion it was a test of courage, strength and having already won 5 races in 5 years does the company honour. As it is a company that dominates in all the disciplines in which it participates, this is not sufficient, it wants to hit the jackpot. It is a very dynamic company that knows that to arrive you need expertise, determination and commitment, it is nice to be part of this challenge ".

How hard was it to say goodbye to Pramac?

“I've always been a Pramac man. When I communicated my decision to Campinoti, he was disappointed. He didn't expect it because it all happened very quickly, it was something 'cooked and eaten', as they say in my part of the world. However, from the person he is, the first thing that Paolo wanted to emphasize is that our personal relationship will not change, there is mutual esteem and respect that go well beyond the professional aspect. This pleased me very much. I made a decision right down to the wire, but the timing was right and sometimes you have to make some unpleasant choices. "

How did KTM convince you?

"It didn't take long also because, as I said, there was no time, I decided in a few days. I also knew their reality well, I had experienced it first-hand, and then we had always stayed in touch. I too was amazed, because I totally put myself at stake again. Where I was, I was living in a condition of relative comfort because I knew the environment and I myself was doing it, in a certain sense. I had everything under control, everything was tried and tested, so I was amazed that I was able to leave just when it seemed time to reap the benefits of years of work. This is a challenge on another level, less attractive in the short term in terms of results, but in the future it will safeguard me without professional growth ".

You are leaving the 'Ducati system', envied by the whole paddock, to go to a KTM that struggled a lot in 2021 after the good results of 2020.

“With just 5 years of experience in MotoGP, every situation is still potentially new for them. In the first 4 years they enjoyed the concessions and therefore a certain flexibility; losing them after the 2020 results, they found themselves managing a totally new and much more difficult condition. They paid the price, now let's see if the changes made, especially on a technical level with the arrival of Fabiano Sterlacchini but also of others, will allow them to cope with this new state and return to 2020. In that year they were the best at interpreting concessions in the best possible way, they weren't the only ones to have them ".

You mentioned Sterlacchini, with him and you KTM is therefore betting on the Italians to win?

(laughs) “I don't know if it's a question of nationality or opportunity. Fabiano is certainly an experienced person who will be able to give a great help from a technical point of view, I will try to make mine available. The fact that we are both Italians is perhaps a coincidence, but even in Japanese teams there are many Italians, or in any case Latins. We are probably more predisposed to manage the unexpected, a little more imaginative, we are able to improvise ".

What do you think you can bring from your experience in MotoGP and SBK?

“It is not the first time that I have to deal with an official team, this helps me to know strengths and weaknesses. Having not yet spent even a day in this new context, I find it hard to answer, but I think I have a wealth of experience that can help ".

What do you think of Oliveira and Binder, your new riders?

"They are two riders who took advantage of it when they had the opportunity to win in MotoGP. Miguel came close to the World Championship in the other categories, while Brad had dominated the championship in Moto3. I am very, very happy to be able to work with them, in my opinion the bike and rider package will work very well. I don't know them fully yet, but Oliveira in 2018 would have been the alternative to Bagnaia in Pramac, logically, as Pecco is an Italian, we first focussed on him ".

The future is also bright for KTM, I'll give you a few names: Raul Fernandez, Remy Gardner, Pedro Acosta.

“Next year we will have to show improvement to be able to keep them with us and give them the right motivation to have a bike that allows them to do well. All the prerequisites are there, now we have to put them into practice, but from the outside it seems to me that nothing is missing. The project took shape well thanks also to Mike Leitner, now it's our turn. In the true sense of the word".

Leitner: “I was the one who spoke with Guidotti to bring him to KTM”