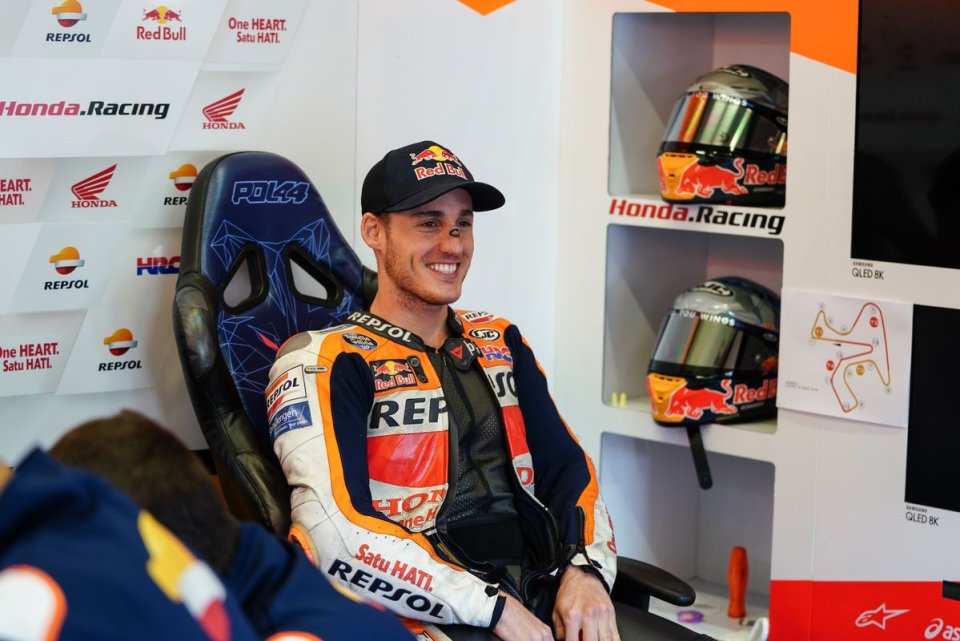 Pol Espargaró is perfectly aware that he has partially disappointed the expectations of those who chose him as Marc Marquez's wingman in Honda for the two-year period 2021/2022. The Spaniard arrived in HRC after an excellent season in KTM and the hope was to see him fight permanently for the podium. The results, however, were different, also due to a bike that suffered a lot this season except on rare occasions.

In an interview with our colleagues at Marca, Pol spoke freely about the season just ended which at least ended in crescendo, with him also stepping on the podium at Misano behind Marc Marquez and giving Honda a double that at the beginning of the season seemed a mere pipedream. Espargarò knows he has to take steps forward, but he has total confidence to be able to do it by returning to the levels that everyone expected of him before hiring him. It must also be considered that with Marc Marquez struggling with diplopia, in 2022 Pol runs the risk of finding himself as HRC's spearhead rider.

"The season was strange, you could say it went badly. It wasn't the season we wanted - said Pol - I didn't have huge expectations coming to Honda, because so many riders have suffered on this bike, but it certainly wasn't the ideal season I had imagined coming here. Without a doubt, I did not get what I wanted, even if we finished where I wanted to start. I feel I am in the best moment of my career and I want my daughters to see me on the podium. "

In short, Espargarò is very demanding and wants to offer more in 2022.

“I am demanding because there is no other way. It is true that, at least, I could have avoided telling the press and say, 'Well, I'm happy with what I achieved by finishing 10th', but I can't. I have been in the world championship for 15 years, I am 30 and I started when I was 15. If I had not been demanding with myself and had not demanded the maximum, that is to win in all categories, I probably would not be here. I don't think getting here is not the complicated thing, even if it is very difficult to be at the level of all the riders in the world championship, I think the most complicated thing is to stay here. For example, in my time with KTM, if I hadn't been so demanding on myself when I knew the bike wasn't up to par and we were at the bottom of the grid, I wouldn't be in these HRC colours now. This is my philosophy ".

The objectives are clear for 2022 and Marc Marquez remains the benchmark.

"I think the bar is set by the fastest rider of the manufacturer, who is Marc. And we have seen that when he is well he is capable of winning. This year he has not been as consistent as in other years, well, the injury, the bike was not at the same level .... There are several things that did not allow us to be as fast as we would have liked, but I have to admit that there have been many weekends in which Marc raced that I was not at his level. That means I have to improve, I will work as hard as possible in this preseason to be the best version of me when I start next year. "

In his first season in Honda, Pol Espargarò was in any case faster than Jorge Lorenzo and also than Pedrosa in his last season.

"I’ve got a lot of respect for them. Jorge was a great rider and Dani is a great rider, because he is still active. I have respect for them, as well as for Álex (Márquez), who also came through here and had a difficult year, but he's a world champion. The bike is obviously not easy. In this sense, in the end, also something much bigger, which is ambition, has an effect. I have a much greater ambition, I wanted to achieve something different with a different bike than KTM and that meant being next to the best, Marc. Not the easiest or most comfortable option, it would have been more comfortable to stay with KTM probably, but if I had this opportunity and retired without knowing what would happen, I would never have forgiven myself. My future was with Honda. With all the respect I have for the riders who have been through here and haven't had great seasons at HRC, I felt I had the ability to do better. The end of the season was good, without it being the year that I would have liked ".

KTM: "From the first GPs, we knew that bike development wasn’t enough"