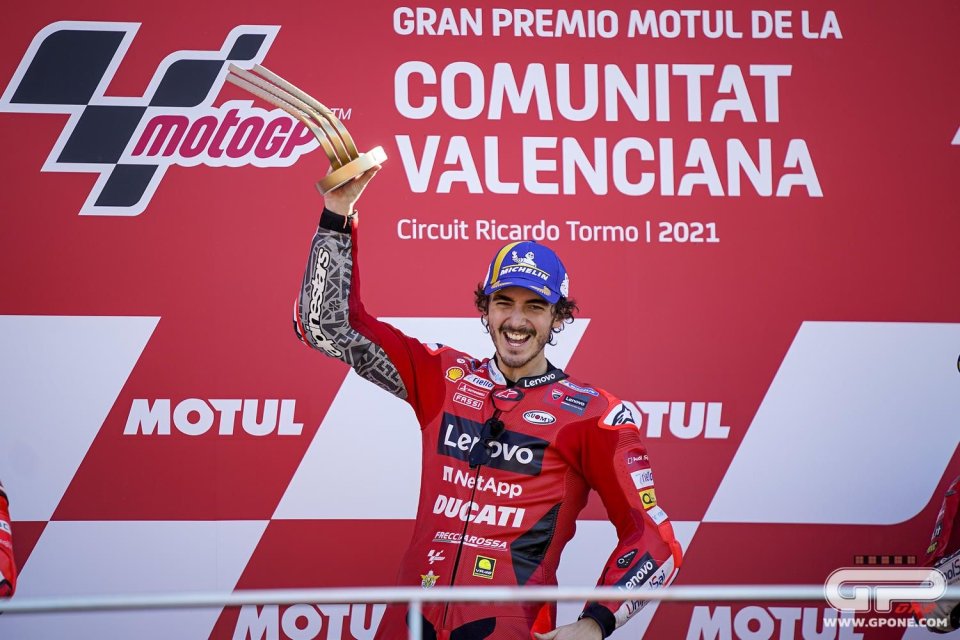 MotoGP, as we know, is not a team sport, or rather every single victory belongs to the rider who crosses the finish line first and to the respective team that follows him from the pits. This year, adding up the entrants to the three categories of the world championship, as many as 22 Italian riders raced on the track. During the various stages of the calendar there are no points up for grabs for nations, but the data that emerges from an analysis of last season's victories is that in 2021 the Italian flag was unfurled on the top step of the podium "only” 12 times.

This number could be insignificant were it not that a lower total dates back to five years ago, in 2016, when the milestone reached was that of 10 victories and the number of registered riders was always 22. During the four years from 2017 to 2020 the average number of GPs won by Italian riders amounts to 19. Below is a simple graph that contains the data analysed and the trend of the same over the last six years.

Obviously, it is not possible to give an explanation to the trend of these results, as it is also not possible to make a forecast about the trend that the graph will have over the next few seasons. What can be observed is that 2021 and 2016 are the only two seasons, in the last six years, in which an Italian rider has not won a world championship in any of the three categories.

In 2017 Franco Morbidelli won the Moto2 World Championship with 8 GP victories during that season, out of a total of 20 won by Italy. In 2018 Francesco Bagnaia became Moto2 world champion and, like Franco, he too climbed on the top step of the podium 8 times. The 2019 season crowned Lorenzo Dalla Porta champion in Moto3 with the highest number of victories among all Italians during that year: 4. Finally, 2020 saw Enea Bastianini triumph in Moto2. Only this latter year was an exception as Enea and Luca Marini, runner-up, achieved three wins each, contributing to an equal increase in the number of GPs won by the Italian riders.

This year the total stopped at 12, with Francesco Bagnaia's four victories in the premier class (in the Aragon, San Marino, Algarve and Valencia GPs); two victories in Moto2: one by Fabio Di Giannantonio (in the Portuguese GP) and one by Marco Bezzecchi (in the Styrian GP); and six victories in Moto3: one by Romano Fenati (in the Silverstone GP) and five by Dennis Foggia (in the Italian, Dutch, Aragon, San Marino and Emilia-Romagna GPs). The Leopard team rider fought until the penultimate round of the calendar against the new world champion Pedro Acosta for the title. Obviously, the five victories were not enough either to conquer the world championship, or to contribute substantially to the figure in question.

The graph below crosses the results of MotoGP, Moto2 and Moto3. If we focus on the 2016 and 2021 seasons, we can see that in both seasons it is precisely in Moto2 that there is a lack of a sufficient number of victories to keep the average on a par with other years. In 2016 the only victory of Lorenzo Baldassarri was recorded (in the San Marino GP) and in 2021 the two aforementioned by Di Giannantonio and Bezzecchi. 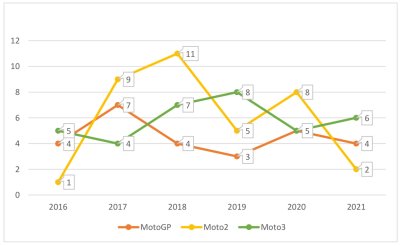 As we can see, as regards the premier class alone, the average in MotoGP is about 5 wins per season. In 2020 there were five: one by Dovizioso (in the Austrian GP), one by Petrucci (at Le Mans) and three by Morbidelli (San Marino, Teruel and Valencia). In 2019 the number dropped to three: with two triumphs for Dovizioso (in the Qatar and Austrian GPs) and one for Petrucci (at Mugello). The 2018 season was dominated, among the Italians, by Dovizioso's 4 victories (in the GPs of Qatar, Czech Republic, San Marino and Valencia). 2017 counted 7 first places, the highest number in MotoGP in the six years taken into consideration: one, and last in his career, by Valentino Rossi (in the Netherlands) and six by Dovizioso (in Italy, Catalonia, Austria, Great Britain , Japan and Malaysia). To arrive at 2016 with the two GPs won by Rossi (in Spain and Catalonia) and the two by Ducati: one by Iannone (in Austria) and one by Dovizioso (in Malaysia).