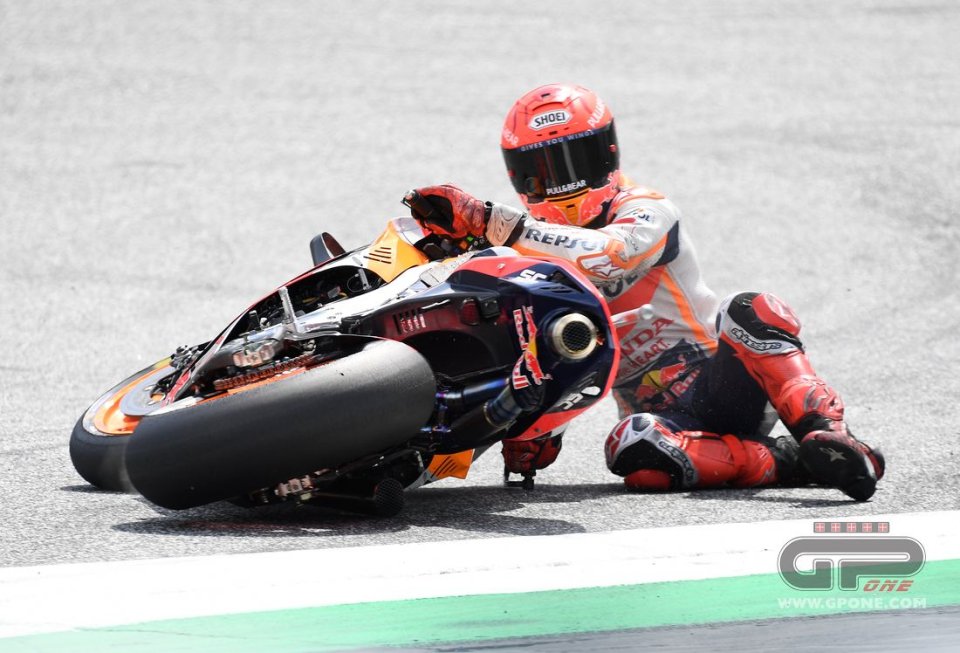 The year comes to an end and the sums are drawn: those who have won the most, those who the least, but also those who have crashed the most and the least. The championship for ‘stunt riders’ is now a winter tradition, and it often reveals some interesting details about the bikes and riders.

Let's cut straight to the chase and immediately reveal the winner of the least coveted prize of the year: on paper it is Iker Lecuona, who with his 26 falls leads the 2021 ranking. The numbers, however, must be interpreted and so in truth KTM’s Spanish rider is not the real stuntman of the year, but he is beaten by Marquez. Marc has in fact picked up 22 crashes, but in 14 GPs, that is almost 1.6 for each weekend, against Iker's 1.4. 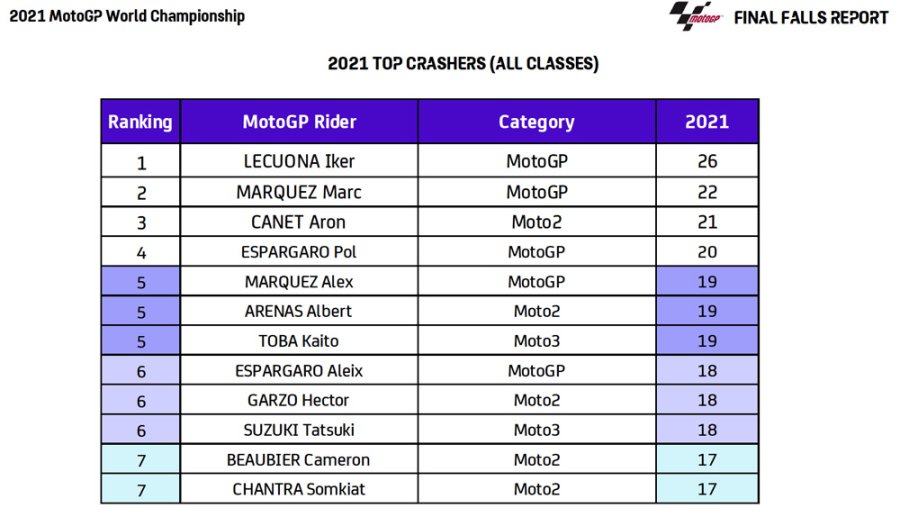 It's no surprise, because Marquez has always crashed a lot in his career, but maybe it's not all the rider’s fault. Certainly his physical condition influenced him, as he was no longer able to produce his legendary saves, but the Honda also seems to have lent a hand. In the general classification, there are in fact 3 HRC riders in the first 5 places: the aforementioned Marc in 2nd, his teammate Pol Espargarò in 4th and his brother Alex in 5th. Not only that, Takaaki Nakagami is still in the MotoGP Top Ten, another indication of the criticality of the RC213V.

Looking at the premier class, behind Lecuona and the Honda trio is Aleix Espargarò, then the two rookies Bastianini and Martin, with Miller in 8th place. Quartararo and Bagnaia, respectively world champion and runner-up, are in the 'good' column with only 7 crashes each, only one more than Mir, 3rd in the championship. Note of merit also for Luca Marini, who limited his contacts with the asphalt to 9 on his debut. The curiosity is Dovizioso: with 0 in 5 races. 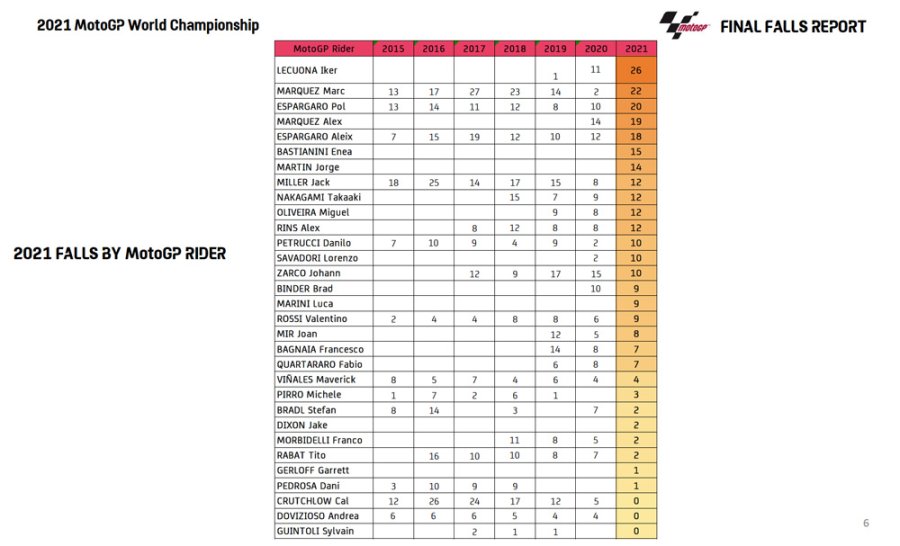 In Moto2 the undisputed leader is Canet with 21 tumbles, which earned him the top podium slot in the overall. Teammate Arenas is two falls away, then Garzo and rookie Beaubier. Among the Italians, Baldassarri and Vietti share 13 crashes each.

Even in this case, the contenders for the title made few mistakes. Very few in the case of Gardner, who crashed just 3 times throughout the season, including one in the race, in Austin. While the Australian was very good in the challenge with the force of gravity, his rival Raul Fernandez still made his name with 8 crashes, an excellent result considering that he was a rookie. 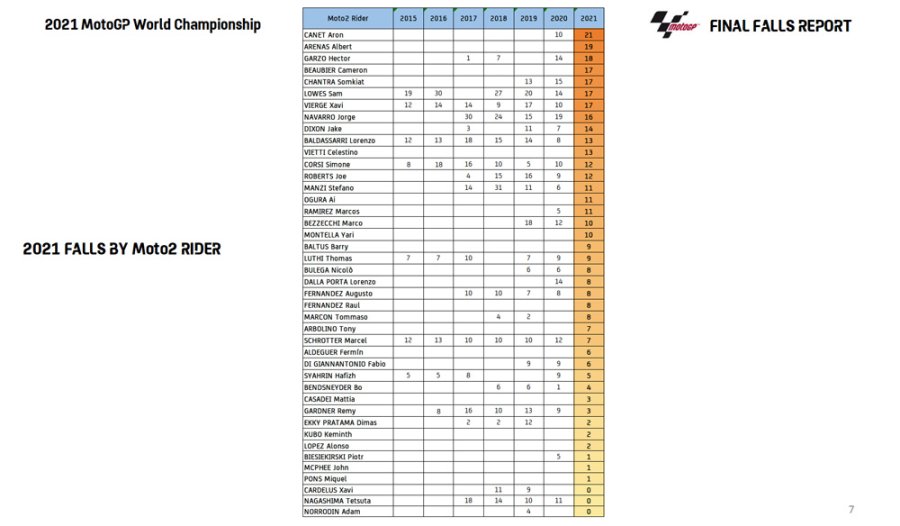 In Moto3, on the other hand, it is Japan that reigned supreme, with some obvious jokes about suicide bombers. Kaito Toba and Tatsuki Suzuki made it a 1-2, with Andrea Migno 3rd, but it must be said that the Italian was often thrown to the ground without blame.

In the cadet class, the rule that the world champion makes few mistakes does not apply. Pedro Acosta, in fact just off the podium of the crashers with 13 falls, but he was a rookie. It was a completely different story instead for Dennis Foggia, who limited the number of slides to 5. However, if you have to crown a champion, this is Romano Fenati: just 3 falls in 18 races, the same result as last year (in which there were only 15 GPs) . 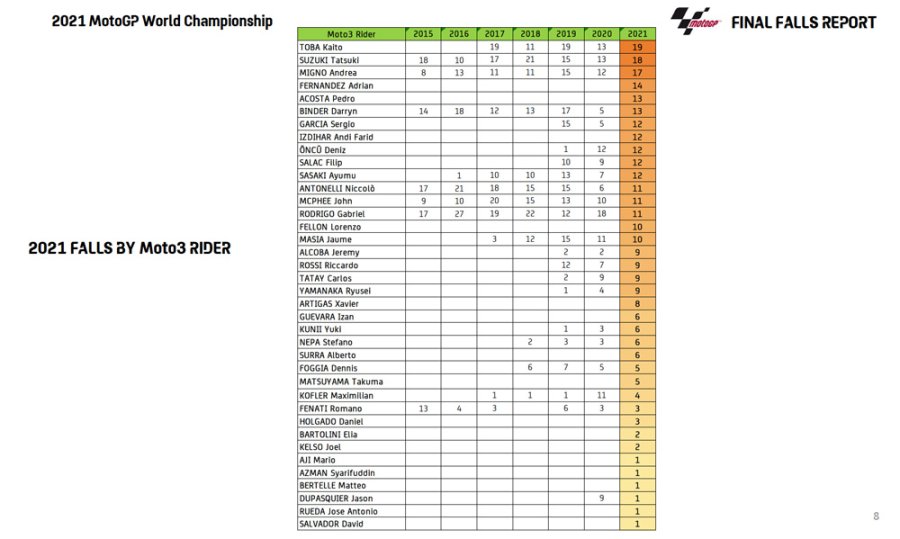 Taking into account all the classes, there were 750 crashes: 278 in MotoGP, 367 in Moto2 and 305 in Moto3, numbers that do not differ much from the average of previous years.

The session where the riders crashed the most (and this applies to all classes) is clearly the race, followed by FP3, where the riders fight for direct access to Q2, so they take more risks. 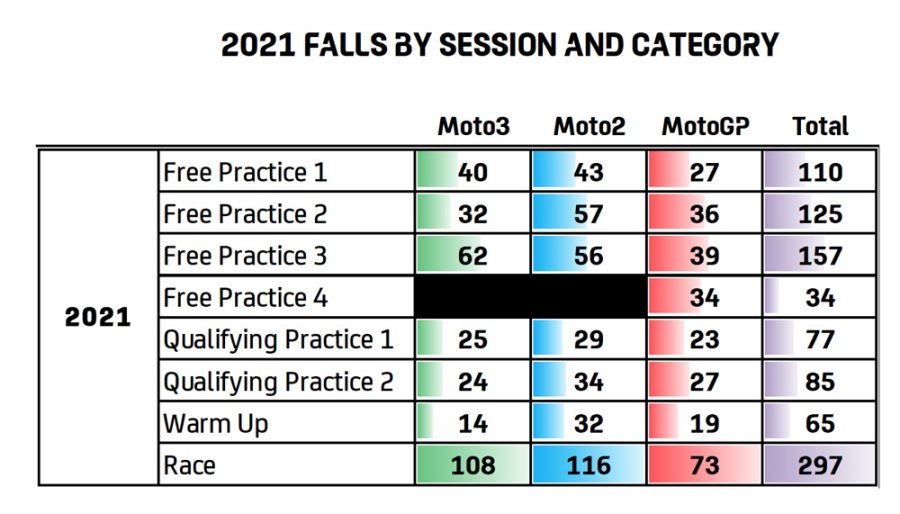 If, on the other hand, we talk about circuits, for three years now, Le Mans has always been the nightmare of the riders. This year there were 118 crashes during the French GP, 37 of which in turn 3 alone. On the other hand, there is Losail: its two GPs are at the last and penultimate place and in in terms of crashes, making up the podium with the Red Bull Ring. 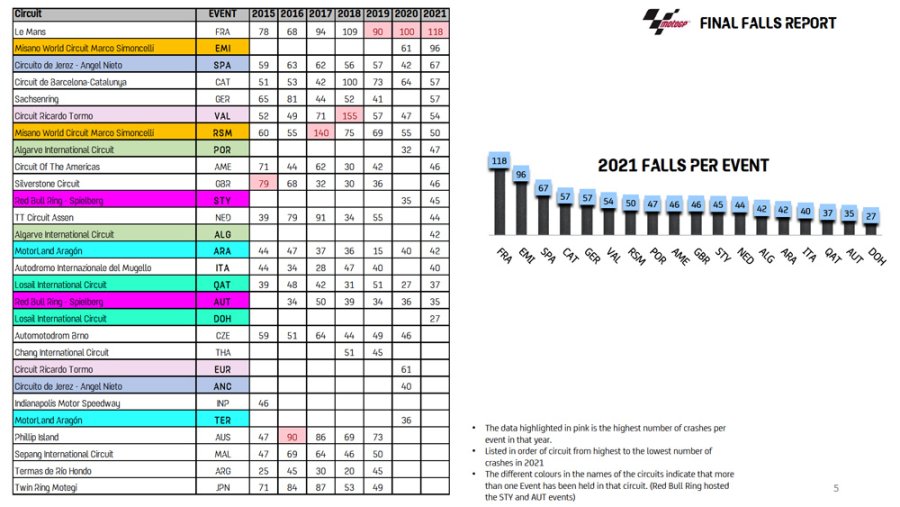