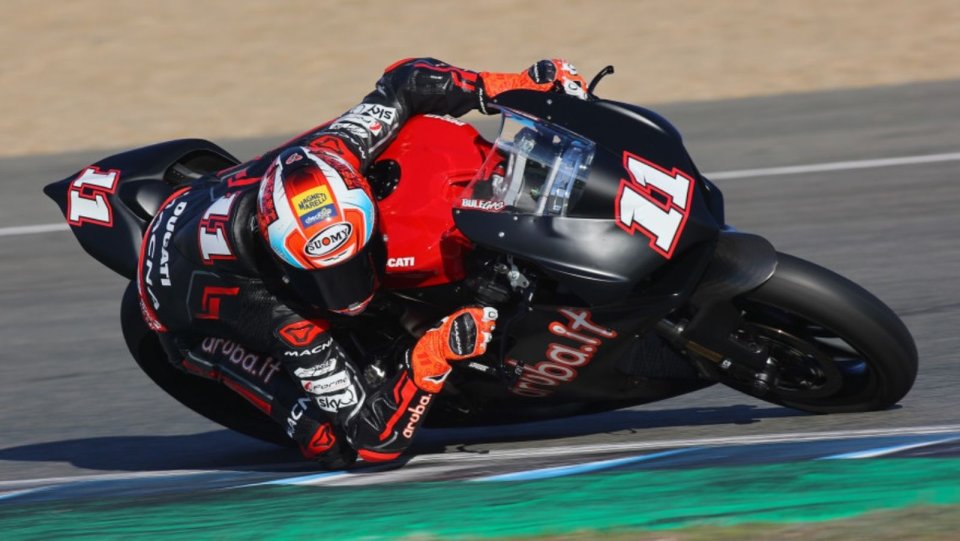 After the Moto2 and Moto3, a handful of riders in the derivatives paddock were ready to grind miles along the Jerez de la Frontera track, but there were also MotoGP test riders present, like Michele Pirro and Sylvain Guintoli, as well as Alvaro Bautista with his expected return to Ducati. During the two tests days on Spanish soil, Nicolò Bulega made his absolute debut on the Panigale V2 959, which he’ll be riding for the SuperSport World Championship in Borgo Panigale’s official line-up. The former MotoGP World Championship rode 61 laps, the best at 1'42"952 (more than a second behind Krummenacher’s record lap in 2019 at 1'41"775, for what it’s worth... ).

“I’m happy with these tests,” Nicolò said. “My debut was quite shocking. I had never ridden the bike, plus, I wasn’t even familiar with the tires and the type of team work. There are a lot of things to learn. Besides the times, which we looked at relatively, today we started off on the right foot. The general feeling is growing. I feel satisfied. Now I’ll try to train as much as possible during the winter break in an attempt to get into good shape for the start of 2022,” the 22-year-old rider concluded.

The Soft front will be a good solution for the less aggressive riders who need good feedback and high grip levels at maximum lean angle. The Hard...
7 hours 25 min ago

“I don't know when he'll be back. When he feels ready, he’ll come back, not before. Then he’ll have to work on his muscles, see if his shoulder is...
19 hours 3 min ago

"In the morning I was closer, but in the afternoon Fabio made another step, or rather a ‘big step’ in braking. And I was already at the limit. That’s...
22 hours 9 min ago