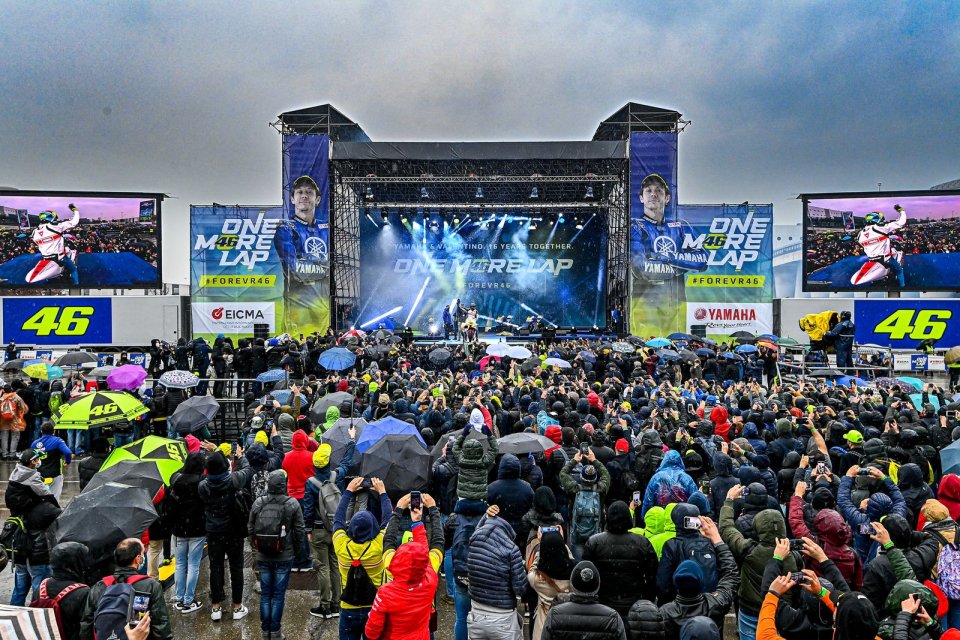 Valentino Rossi’s last lap was a huge crowd, with more than 9,000 people greeting him under the stage. Not even the cold and rain could hold back the yellow tide of fans for a final farewell at Eicma. A rockstar stage, with the 4 YM1s with which he won as many titles with Yamaha and amplifiers blaring out the music of the engines.

The Doctor entered the scene as a rider, aboard a white and red MotoGP bike, the livery celebrating the 60th anniversary of the Iwata manufacturer. In front of him was a sign saying that Sundays without Vale will never be the same.

"Even my Sundays will never be the same again - smiles the Doctor - I still need some time, luckily I still have a few months to get used to it before the championship starts again".

The time and organization of the event was a journey through memories, with one eye on the future, between images of victories but also of difficult moments, with Rossi interviewed first by Federica Masolin and then by Linus. Sixteen years of Yamaha condensed into as many films.

Starting from his first victory at Welkom in 2004 ("The greatest moment of my career, because I was very afraid of changing but on the other hand it would have been bad not to") to move on to the 2006 Valencia title ("a big disappointment, my first, because before I had always won, I was incredulous.”)

Valentino's story is full of chapters, twists, crashes and ups and downs. A novel that when you see it all again seems impossible that it was written by a single person. There are the epic battles, like the one with Stoner in 2008 at Laguna Seca with the famous overtaking move at the Corkscrew, but also the bad injury at Mugello in 2010. "That marked the watershed between the first and the second part of my career" underlined Valentino. From the winner-takes-all Rossi, to the one who fought but did not always win. His last success was in 2017, in Assen: "I thought I would win another 2 or 3 races. I stopped at 115, which is still a good number, but 116 would have been better,” he joked.

However, there was something that has never been lacking in his entire career, the support of the public. "Imagine what a boost it can give to go out on track and see all the yellow stands, I was lucky - he thanked his fans - But sometimes I also put myself in the shoes of my opponents, maybe they said: that sucks!" he smiled. They are the same fans who were at Eicma today and a few weeks ago in Valencia for the last GP. “On the worst track for me, how do you say? One problem with my job - he continued with his usual irony - It was hard to stay focused, but I enjoyed it and we messed around a bit, as if I had won ".

Now he has officially retired, indeed he’s a MotoGP Legend (“I had to dress elegantly to go and pick up the prize”). Farewell messages from famous people bounce around on the screens: from Keanu Reeves to Tom Cruise, from Ronaldo to Roger Federer, then Lewis Hamilton, friends Jovanotti and Vasco Rossi. Everyone thanking him, cheering for him again.

"Every now and then I feel sad, because I find myself thinking that I will no longer race - he confessed - I will miss that adrenaline and that pressure, even all the people in the paddock who had become a family, but above all I will no longer be a rider" .

One of the symbolic photos is that of Valentino kneeling in front of the bike before the start.

"There you feel fear, of making a mistake or not doing a good race, but also for the first corner, the most dangerous - he said - It is the last moment you have to focus only on yourself and on your bike, because when you get up you are alone with it".

Maybe even in car racing it will be like this…

"I'm happy to remain a racer, but I don't know if it will be almost as fun as MotoGP, which is the best thing, we'll see - he said - I also said that I will go to some GPs of the world championship and I will do it, but I don't know how I will feel ".

If he looks back, however, he has no regrets.

“My soul as a motorcycle rider has never aged. I enjoy myself today as I did twenty years ago. That's what my secret was,” he confessed before embracing his audience once again.