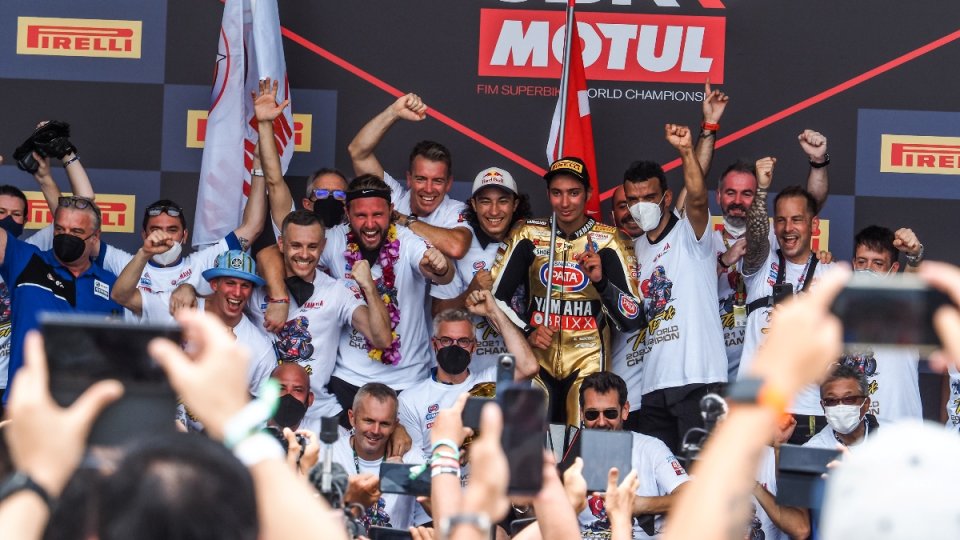 “ A new era begins”… That’s what Italian singer Lorenzo Cherubini, aka Jovanotti, sang a couple of years ago. Whether or not it’s a new era, we’ll find out next year. The fact is that this 2021 represents, in all respects, a divide in the Superbike.

Mandalika crowns Toprak Razgatlioglu, who received Rea’s scepter and, at the same time, bid farewell those who contributed to writing the history of the derivatives in the past, like Chaz Davies, who’s about to hang up his helmet, as well as Tom Sykes and Leon Haslam, who’ll be on the lookout for new adventures in 2022, elsewhere.

In Indonesia, tears of joy mixed with those of nostalgia. There are no losers, but only winners, who deserve credit for having given the Superbike a year that will forever remain etched in the minds of both professionals and fans.

THE GOOD – Yamaha’s the winning card! The constructor with the tuning fork logo cannibalized 2021 by winning everything there was to win: riders title, constructors title, and also an independent one, like the GRT. They couldn’t really do much more than this, and now the best thing they can do is confirm themselves in the year to come. Everyone was waiting for Toprak, against a Johnny Rea who flew with his heart beyond the limit in Indonesia. Talking about the defeat is forbidden, because the rider from Northern Ireland fought until the end, keeping the interest in this World Championship high. Starting from the next one, he’ll be going back to his origins, showing off that #65 that we weren’t used to anymore.

THE UGLY – Local fans braved the bad weather, showing their warmth and welcome to the entire paddock. Hats off in front of the many supporters who rushed to the circuit for the last round of this World Championship on a track that was new to everyone and discussed for a long time. Too bad that the rain partially ruined the show, to the point of canceling the Superpole Race and reducing Race 2 to just 12 laps. Let’s hope for a better scenario in  2022, perhaps at a different time of year.

THE BAD – Once again, Johnny Rea ended up alone on the track, without any ally by his side, because Alex Lowes became a spectator of the Mandalika weekend directly from the pit. A tormented 2021 for the British rider who, after the problems deriving from the Barcelona accident, he suffered another fall and was forced to raise the white flag in advance.

THE CONFIRMATION – Mandalika was Scott Redding’s last ride on the Ducati V4. For the occasion, Scott wanted to bid farewell to the Aruba team by offering up a double podium. Unfortunately for him, the World Championship was a fail, but from Barcelona until the end of the season, his trend has been impeccable. With the exception of Race 1 in San Juan, Scott has always been on the podium in all the races. Good luck for your future with BMW, Scott!

THE DISAPPOINTMENT – We’re convinced that he’s his own disappointment, since he arrived in Indonesia with very different expectations, but then ended up  in the hospital due to that violent highside in Race 2. All’s well that ends well, and so we’d like to wish Michael Rinaldi a quick recovery, with the intention of seeing him and his authentic smile back on the track soon.

THE ERROR – He wanted to end his adventure with ParkinGO in style, given that there will be a Moto2 waiting for him in the future. But it’s too bad that he fell during Race 2. A really awful fall. Yet, we’re convinced that Manuel Gonzalez left an indelible memory in Rovelli’s mind and that of his team. A safe bet, and we’re aware that the best is yet to come!

THE SURPRISE – There’s always a first time. And that holds true for Raffaele De Rosa, who had his first SuperSport victory in Mandalika. A long sought-after success that has finally become a reality for the rider from Campania on the Orelac team’s Kawasaki.

THE PASS– The award goes to Johnny Rea for how he defended himself during Race 2 by responding, blow for blow, to all of Scott Redding’s attacks. A stellar duel between the two, as if they had raced on dry ground. Too bad that the track was full of water.

THE INTERESTING FACT – Yamaha had been waiting for twelve years to celebrate a World Superbike title. Toprak Razgatlioglu put an end to the fast after Ben Spies’ triumph in 2009.

THE I TOLD YOU SO – Toprak Razgatlioglu: “I’m going to Indonesia to win all three races.” He missed the target but hit a much bigger one called the World Championship.