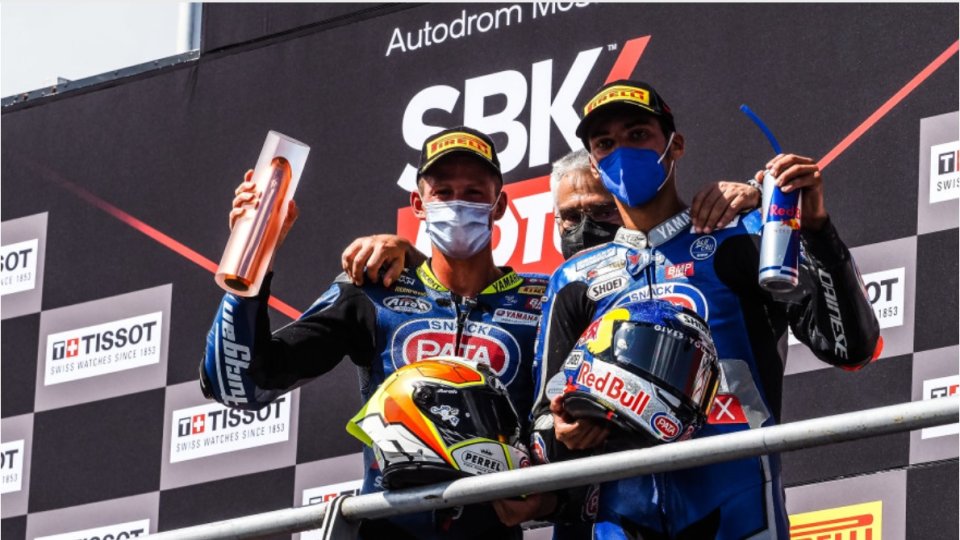 We can only congratulate Andrea Dosoli, because if there is a touch of the Italian flag in the Yamaha party, it is above all thanks to him. Andrea is politically correct and in the paddock we make fun of him for this aspect that distinguishes him: "In the future you could be a press officer", we sometimes tell him laughing and joking when we meet him.

The thing we like the most, in addition to his availability, is that he never fails to answer jokes and even a few small provocations, like when last February, during Misano tests, we told him: "Andrea, your rider he's talented, but this R1 needs a few more horsepower to stay up front with the Ducati ”. He replied with a smile: "You must believe in us more, let's wait and see".

The season is over and Yamaha have won everything there is to win. More than that it was really difficult to do. If Sunday 21 November will remain a date forever etched in Toprak Razgatlioglu's mind, the same goes for Andrea Dosoli and his exhausting work carried out over time.

It's a path that started from afar after experience gained in Forward and BMW up to Crescent, who decided to focus strongly on the Lombard manager, so much so that Yamaha entrusted him with the program linked to the production-based series. The mission was certainly not easy given all the difficulties encountered on the way and a bike that was struggling to keep up with the competition. The first rays of light came with van der Mark, but more was required to obtain the top prize.

Toprak, who in 2020 began to lay the foundations for a 2021 as a leading rider, was the turning-point. Andrea put him at the centre of the project, meeting any kind of request from the Turkish rider, who as we all know prefers a particular riding style that pushes hard on the front and makes braking his strong point.

The development of the R1 was then carried on along this line with Dosoli working on and off the track. While on the one hand there is the technical and engineering side, on the other there is the managerial one, thanks to which Andrea immediately removed Toprak from the market, blocking any offers from the competition with a two-year deal he signed in the summer. He thus armour-plated the young Turkish champion and at the same time decided to focus on young riders, as in the case of Andrea Locatelli. Two years ago the rider from Bergamo was just a bit player in Moto2, but over the space of two seasons he became the revelation of Superbike on the factory R1, making that metamorphosis that few would have expected.

Yamaha and Dosoli focussed on a youth policy which also includes Garrett Gerloff, among other things. It is a gamble that dissolved the initial doubts and question marks, as the team waits for the American to regain the confidence that was lacking during this season after the events in Assen.

The World Championship won in Mandalika will certainly not have changed Dosoli's life, but it does represent the culmination of a path characterized by ups and downs. In Yamaha he is now a certainty. In fact, President Éric de Seynes considers him a point of reference, as does Bernie Ecclestone's former right-hand man. We are not talking about Pasquale Lattuneddu, but Herbie Blash, Yamaha consultant with whom Andrea often talks during race weekends, as well as the first person to whom he gave a high five after winning the World Championship.

We must therefore also be pleased that on Toprak's day there is also a bit of Italy that can celebrate. Now for Andrea a bit of relaxation in that area of Liguria that he loves so much and that when he can he never fails to return to. Then roll on 2022 with winter tests and an even bigger challenge to face, confirming the result.