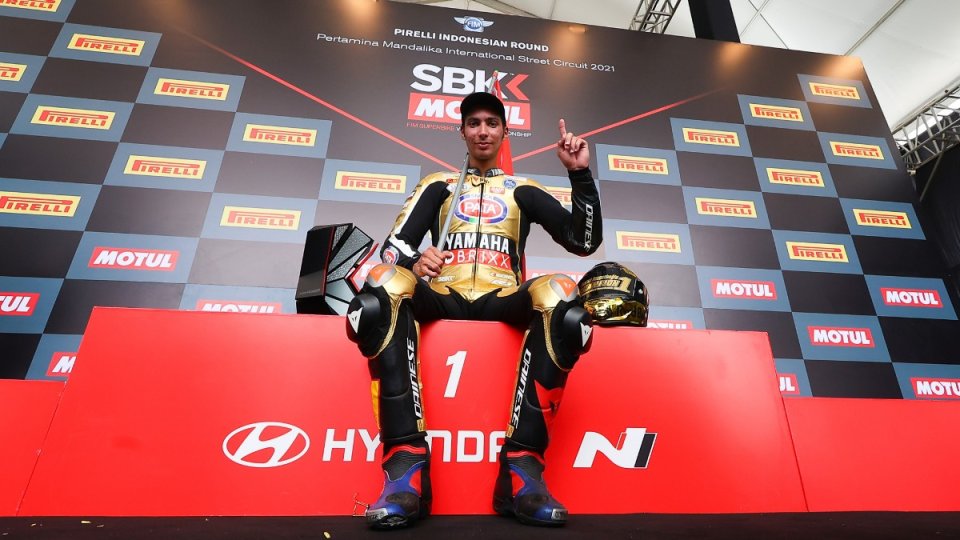 November 21st, 2021: a date that Toprak Razgatlioglu will hardly forget. At the age of 25, the Turkish rider wrote a new page in Superbike history, winning his first world title. A triumph in Race 1, thanks to a second place behind Johnny Rea.

The Yamaha rider wanted to get things over with quickly, without wasting too much time, to then be able to enjoy the party. For the occasion, they covered him with gold, with an unprecedented suit and helmet, to celebrate the dream that he long sought after and finally reached.

Toprak’s joy and smile mixed with tears in memory of the one person who’s missing by his side today, but who watched him from above: “This world title is for my dad,”  he said. “I don’t know where he is, but I’m convinced that he watched me today. I want to dedicate this result to him, thanking all the people who’ve been by my side, like Kenan, as well as Yamaha. There are really a lot of people that I carry in my heart.”

Speaking of Sofuoglu, the pupil commended the teacher.

“I remember when I started from the Rookies Cup. I had no money, less opportunities, but he helped me in this world, contributing to my growth and advising me. In 2018, when I got into the Superbike, I was eager, because it  was a great opportunity for me, since Johnny Rea was there.”

Today was the day Toprak stole the crown the Cannibal has worn for six seasons.

“In the paddock, all the riders dream of beating Johnny, since we know how important he is. It wasn’t easy for me, also because he gave me several tips in Kawasaki. But now that I’m in Yamaha, he doesn’t give me any anymore,” he said jokingly. "We battled it out many times this season, and I think it’s been a good show for the fans. I remember, for example, Magny-Cours, where there was a close duel. In the end, however, I have an excellent relationship with Johnny outside the paddock. In fact, there have never been any quarrels or conflicts between us. We obviously both want to win.”

“I’m really happy, because Yamaha believed in me and I in them, allowing me to make this dream come true. I sincerely thank them, because they gave me incredible support and put me in the best position to fight for the title.”

The Turkish rider reached  his World Championship victory this morning in Race, 1 after yesterday’s race was postponed.

“I tried to put the stress aside for the entire weekend and also during the season, thinking only of winning and not of the World Championship. In fact, I took a risk in different situations today, and I almost fell. I’m thinking, for example, of the save this morning, when I ended up going wide and found Bassani inside.”

“Like I said several times, I like this paddock. It’s a sort of second family, because there are many people I know and with whom I have good relationships. I don’t like the other paddock, since I was there during the Rookies Cup. In the end, we’ll see what my future holds.”

Rea: "The brakes were overheating, I almost hit Toprak"