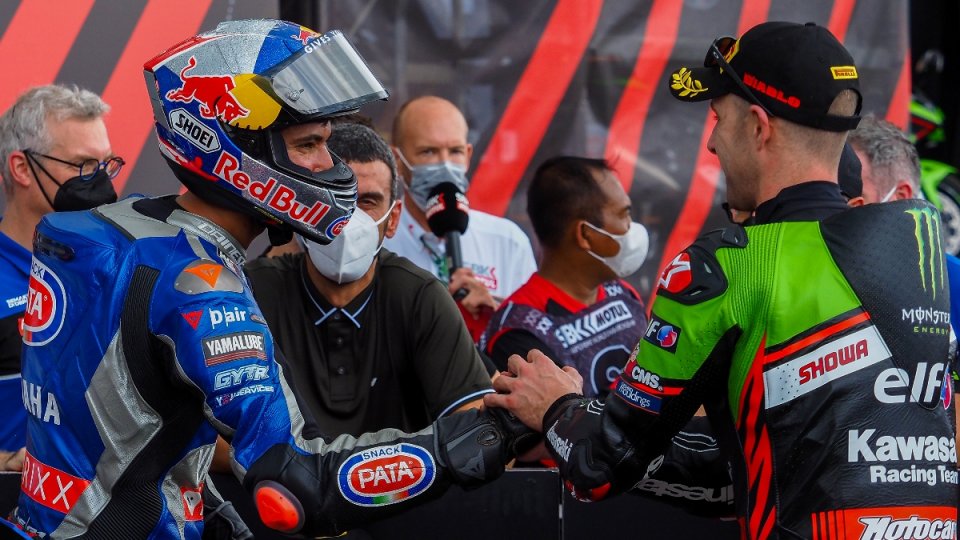 Race 1 will replace tomorrow’s Superpole Race. Consequently, the new weekend format works in Toprak’s favor, since there will be one less race. In fact, Razgatlioglu will only need a 20-point spread between the two races to secure the world title.

In short, everything seems to support the Turkish rider, and he doesn’t hide at the end of a Saturday during which he won the Superpole. He then spent the rest of the day watching the rain and looking for some something to kill time.

“It was a great day, did you see?” he began jokingly. “Obviously, I know that the cancellation of the superpole race works in my favor, and I don’t hide it. But I prefer to look at it from Johnny’s side, and I feel really bad for what happened. I say this because I came here to Indonesia to race three races, and we have to give one up. However, this doesn’t allow me to let my guard down, since the season isn’t over yet, and there will be two more races tomorrow.”

To ruin his plans was a violent downpour that hit the track before the start.

“It was an incredible downpour. It was very dangerous with those conditions, because there was a lot of water on the track, and you couldn’t see the corners. In any case, I’m ready to face any type of condition tomorrow and give it my best, convinced that Johnny will do the same. My dream is to win the last race of the season, and I’ll try.”

In Race 1, Toprak will start in front of everyone thanks to the best time obtained in qualifying.

“To tell you the truth, I don’t like the Superpole that much. I prefer the race. But today the conditions were better than yesterday. There was less dirt on the track, and I think the other riders share the same point of view as mine."

Now all that remains is to wait for Sunday, a day that could be historic.

“In Turkey, everyone is waiting for this moment, and I also can’t wait to get on the track. If all goes as it should go, a conference in Istanbul with all the top officials will be scheduled on Tuesday, followed by several meetings with the media. The problem is that I’ll have to speak in English, and that doesn’t help me. I’ve been trying to improve lately, also watching Netflix, but I’m still not at a good level. I have improved compared to a few years ago, but I need to do more.”