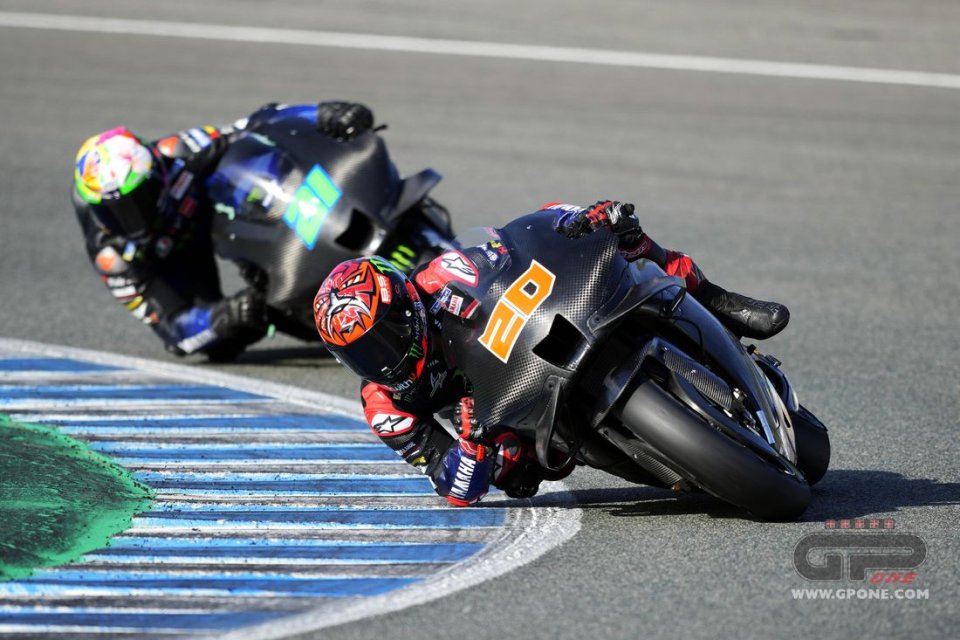 Fabio Quartararo ended the Jerez test with a second time, behind Bagnaia’s Ducati, but this aspect takes a back seat. The world champion’s was instead aiming at the M1’s development, and his expectations weren’t met.

With frames that didn’t convince him and fairings that didn’t seem to have given him the change he desired, he’s definitely seeing his glass half empty. But he mustn’t despair, because they have a long winter ahead of them, even if these Ducatis seem to be a step ahead of the competition.

“I’m not worried about the potential expressed by the Ducatis, even if they look super fast,” El Diablo began. “Unfortunately, we didn’t make progress in this test, but I hope we will in Sepang. We’ve tested many things here in Jerez, but I haven’t noticed a substantial improvement on the bike.”

Fabio, however, thanks Yamaha for the commitment shown, and they also brought a new fairing for the occasion.

“Yamaha worked, and I consider it positive to be able to compare myself with a rider like Crutchlow . He’s a great help to me, since he’s a fast and sensible rider. The fairing? To be honest, you don’t feel it, It’s hard to say. It looks a little better.”

He also talked about the frame.

“I haven’t seen any improvements. At the moment, we’re looking for more grip on the rear that, unfortunately, we haven’t found. Let’s say that, at the end of these two days, there was nothing really positive.”

Meanwhile, Bagnaia returns home much happier than when he won the Moto2 title. That’s what he stated at the end of the day.

“I’m going home as a world champion and happy,” Fabio replied. “I’m not worried because Yamaha knows what to do. Unfortunately, the tests didn’t go as I hoped but, in the end, I’m convinced that the whole team is going home happy after such a season. The engineers, who will have a bit of work to do, maybe a little less.”

His last comment was on the potential expressed by the Ducatis.

“Honestly, I don’t understand their dynamics well. What I know is that we have to work to be more competitive. We have to, in fact, reduce rearing up with the M1. Certainly, Ducati’s improvements depend on the combination of bike and rider, because every bike needs a rider who enhances its potential.”