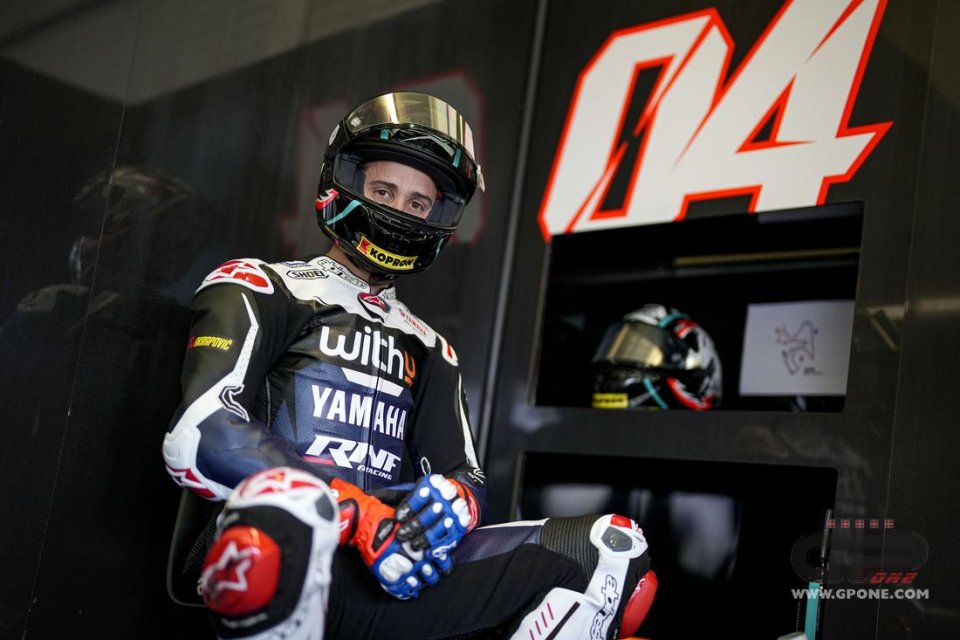 Second day of testing at the Jerez tests also for Dovizioso, who does not hide the intrinsic difficulties in having to adapt his riding style to the new bike in such a competitive context as MotoGP.

Did you have the opportunity to try the new Yamaha, what are the main differences compared to your bike from last season?

"The biggest difference can be felt under braking - Dovi said - the response on the front is much better. The engine has also changed so this changes many things, but the bike's DNA remains the same, good or bad".

Do these changes in the new bike respond to any problems you have had over the course of the season? Do they make your approach to Yamaha easier, so to speak?

"It undoubtedly reflects my expectations, moreover, the bike already has an excellent benchmark in Quartararo's performance, so I already have several data on which to work. However, I think that Fabio has a special feeling with this bike, while even if I can be fast I have not yet found the right automatisms, I still have to study the data a lot and continue to adapt to this new riding style. Sometimes I need to stop to revise everything, you cannot imagine how difficult it is at these levels having to overturn certain automatisms in riding. It will take some time, unfortunately today the wind did not help us in having good comparisons but we are improving. I am not in the leading group but in the afternoon the pace improved ".

Speaking with Fabio, he didn't seem enthusiastic about what Yamaha brought to these tests compared to what other manufacturers are doing. Do you share his concerns?

"Fabio and I are in different worlds. His feeling with the bike is such that it allows him to better perceive certain details and therefore also understand how much certain components actually make improvements or not. As far as I'm concerned, I still find it hard to relate with this new bike. He is therefore able to adapt gradually, while I'm still trying to get the maximum potential out of this bike. "

Earlier you mentioned a step forward in terms of braking, could this give you a way to ride this bike more aggressively?

"Yes, being able to brake hard on the front opens up the possibility of more aggressive riding, but having only approached this bike relatively recently, being able to say that I ride a Yamaha in an aggressive way compared to what I rode last season is not easy. With the previous bike you could tackle the corners with a different style, but that means losing a lot of speed in other sectors. "

You often talk about "instinctive riding" that you still lack with this new bike. Is it just a matter of having to keep lapping or is there more you can do to address this?

"It's all up to the rider, having already been through it I know what it means to have to change your riding style, I know how difficult it can be. The point is also how much you can adapt, certain automatisms are difficult to eliminate, it depends a lot on the rider in this case. This afternoon we have taken steps forward."

Would it have made sense to let you try the Yamaha 2022 too, also in light of Fabio's criticisms for having more points of view?

"I don't think my involvement would have made much difference. It is clear that at the moment there don't seem to have been any major changes according to what Fabio says, but we must also take into consideration the possibility that next year the chassis and the components we saw today may be different, it will be up to Yamaha to make certain decisions. Personally, I don't see big problems on the horizon from this point of view. "

Coming from the Ducati, did you see their improvements in testing today? What can you tell us?

"I saw Bagnaia finish with an exceptional time, but I don't think we saw much from the Ducati, the other riders rode with the same times as last season. It is also difficult to say what they worked on just by looking at the results".

So as far as you're concerned, it's just a matter of resetting certain automatisms in riding in order to get the potential out of this bike?

"I don't think it's possible to completely eliminate the automatisms, I think the rider’s skill is continuing to work and progressively improve without going back. For me at the moment this is what is happening, when I am among the first it will mean that I am doing well and that my riding style will already be different, it's all a question of adapting".