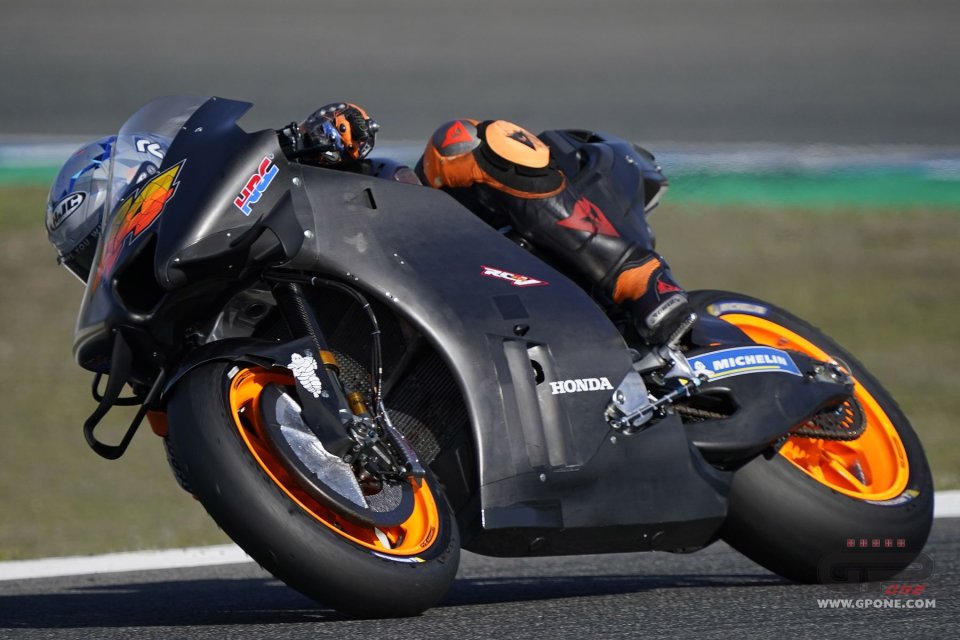 Pol Espargarò did not have the 2021 season that he perhaps had dreamed of when he signed the contract with Honda to become Marc Marquez's new teammate. With the KTM the Spaniard was able to impress, only that once he jumped on the RCV he immediately realized that he had a big problem, namely that of not being able to ride this bike as he was able to do with Mattighofen's orange machine.

These Jerez tests, however, took a lot of weight off the stomach of Pol, who has finally found the confidence to be able to ride following his own style, rather than mortify him to meet the needs of the bike. Among other things, Espargarò was also recovering from a very bad crash at Valencia and in these tests he had to save his energy to be able to always remain clear-headed on the bike.

"The new bike is good, but there is still a lot of work to be done - said Pol - The potential is very high, we have recovered some grip at the rear. I have not yet started to ride as I do, using the rear brake a lot. One thing that is fundamental for me. This year I have used it less and less and instead it is a strong feature of mine ".

Is it a problem that has affected you a lot this season?

"In KTM I used it a lot because especially at the beginning of the project the bike didn't turn well. I used it a lot to increase turning and it worked. On this bike we don't have big turning problems, but the way you have to brake often leads me to lock the rear of the bike and this is a huge problem. It’s something that has taken my confidence away, while with the new bike I feel I can use it again. I feel safer entering and exiting corners with this bike ".

Have the other Honda riders complained about this as well?

"Every Honda rider had problems entering corners with the rear. It was particularly important for me. The other riders also complained a lot about the bike coming out of the corners, while for me the problem was braking when entering. The fact is that corner exit is needed for performance, while having a perfect entry also serves to have more confidence, even with heavily used tyres. I think that this year we will have fewer crashes due to the front tucking in on corner entry.”

At what point do you feel with the new bike?

"We still have to play a lot with the balance of this bike. It is normal that by increasing the grip at the rear we also loaded the front more, we have fewer wheelie problems when exiting. Everything is connected, last year we started working to solve all the problems and Honda did a good job. I hope that now the data collected here will be used to bring something new to Malaysia, especially as regards this problem at the front. We are working it too hard now. "

But where was the clear step forward?

"With this bike I think I can feel the limit more and this represents an excellent starting point. We had a mission to accomplish in the evolution and already from the first corner with this bike I felt very different in the saddle. I’m still not as precise as I would like to be, I still have to fully adapt to this bike but I certainly feel stronger. This also helps in the garage because having clearer sensations, my comments on the bike are clearer, cleaner and even more true. "

In addition to the front problem, which area do you have to focus on?

"In addition to the front, we still have a lot of work to do on the power of the bike. We will be up against Ducati that has so many bikes on the grid this season. If we want to fight with them, we need to be able to overtake them, so we need the power to be able to fight with them. I think that this is the most important thing because the chassis is working well, while we need power. "

Did you have only one version of the new bike here?

“There are two prototypes here with two slightly different powertrain specs, they are quite similar. There are some electronics differences that I can't talk about, but the situation has changed quite a lot in this area. Then we also worked on the chassis and aerodynamics. I think that the work done in 2021 is helping us ".

How do you feel after your crash at Valencia?

"I feel good, better. I'm not riding very well, but at least I can do almost everything well in the saddle. The problem now is my scaphoid that is hurting terribly. The fact is that when the pain is severe, after three or four laps the hand falls asleep. It is a form of defence of the human body when the pain is very strong in an area of ​​the body. A dangerous thing is that it already happens to me with runs of two or three laps out of the pits. Evidently there is something that is not right".