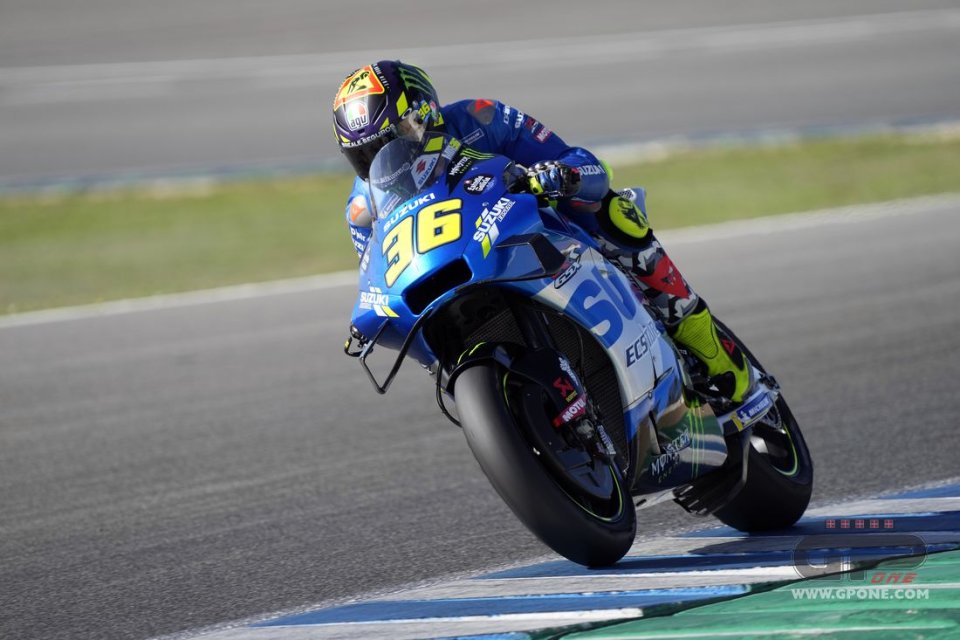 First day of testing in Jerez for the two Suzuki riders, who’ll have to work hard these days to recover the advantage of the other constructors, especially Ducati.

“It was a busy day,” Joan Mir stated. “We did a lot of laps, testing the new components of the bike, especially the new engine. It’s essential now to obtain as much data as possible to understand which direction we’ll have to take to progress. We did a lot of comparisons. The new engine certainly has more power, but it still needs a lot of detail work. The potential is there. Tomorrow we’ll have further confirmation, but the fast pace says that we already have an excellent starting point on which to build the new bike.”

More power has always been one of the most assiduous requests from the Suzuki riders who, thanks to the engine freeze, have struggled this season to keep up with rival constructors, especially in the first half of the championship, when the absence of the lowering device made a big difference on several circuits.

What were the first sensations with the new engine?
“There’s slightly more power. It’s definitely a good thing, but you can imagine that power alone isn't enough. We’ll also have to work a lot on the electronics to refine everything. These days, the objective will also be to understand the true potential of the bike, with both worn and new tires. Having a good bike isn't enough, you also need to know how to make the most of it. All in all, I’m satisfied, but it’s still too early to give an overall judgment. At the moment, we focused more on the individual components than on lapping fast on the track.”

Have you also tried the new frame? There was also a strong wind on the circuit today. Is this a problem during testing?
“The wind is obviously not the best thing during the tests. I tried a new frame, and it’s not necessarily the frame we’ll be using next season. It seems like it’s better when braking but, as always, what you gain on one hand tends to be lost on the other.”

Some riders have complained about tire slippage when cornering. It seems like  the traction control is unable to prevent this problem, and there have also been some falls. Did you have the same problem? Do you think Magneti Marelli should come and let you solve the problem?

“In the MotoGP, you can open the throttle in the middle of a corner. They talk about it as if it were an easy thing but, in itself, it’s not at all. At a maximum angle, if you don’t take on the corner carefully, you can fall. But if you use the traction control a lot, you also tend to lose a lot, so it’s sometimes better to be freer in that area. It’s true that the electronics help a lot, but we can’t forget that we ride three-hundred horsepower motorcycles.”

As for the rear device, are you still working on it? Did you use it in today’s tests with the new engine?
“In order to make a good comparison, we used last season’s set-up, which also included the device. The device itself can still be improved in some areas, and it’s definitely one of the things the development team is still working on, but I don’t know if we’ll try another version tomorrow.”

Alex Rins: We have the foundation for 2022

Alex Rins has more than one reason to face the tests with more determination than ever. If on one hand there’s the need for Suzuki to bridge the gap created between the Hidemitsu constructor and its other rivals - Ducati in the first place - there’s also a strong desire for redemption after a season with fluctuating results and during which he ended up in the gravel several times.

“It was a very positive day,” Alex continued. “We conducted tests on different elements, and it seems like the new engine has that little bit of extra power we were asking for. Now we have to work to create the foundations for next season.”

Did you get the chance to try the new frame too?
“No, today we only had one frame, and Joan tried it. Tomorrow it’ll be my turn. But I’m already very satisfied with the various set-ups we tried today.”

Speaking of engine power, is it exactly what you expected?
“I’m very motivated. I think there’s some good potential that we haven’t fully taken advantage of yet, so the fast lap is still something we need to work on, however, the foundations to be able to make substantial improvements compared to last season are there, but it’ll still take some time.”