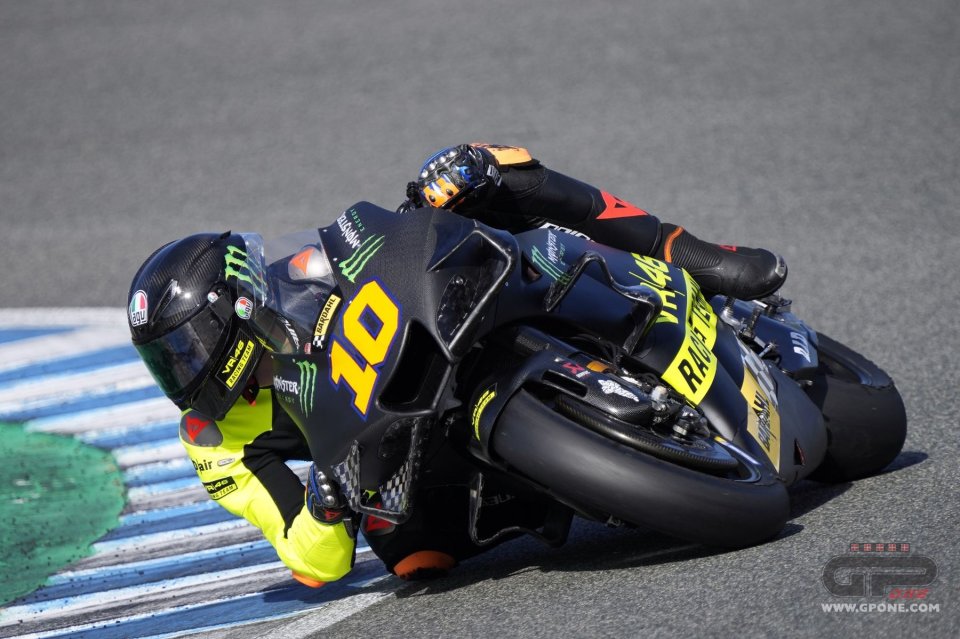 Luca Marini was waiting for the Jerez tests with impatience. He has always been a very analytical rider who likes to work on the details to make clear and concrete steps forward, but in his debut season in MotoGP he was not able to have a real season of winter tests. This first session was therefore essential for him to work on the new Ducati that he currently has in the box, the 2021 spec, and also to acclimatize himself with the new team fielded by VR46.

Marini was able to work as he likes to do, discovering on the track a bike not entirely different from the one used last season but with a completely different potential, thanks to the work done by the engineers at Borgo Panigale. Adding a bit of spice to the day were the declarations by Michele Pirro, who was curious to see Valentino Rossi try this bike. A curiosity shared by Luca himself.

"I don't know when it will happen, but I hope it will – were Marini's words - I will certainly ask Vale to try the bike because it is fantastic. I think he would be surprised to try it."

Were you surprised by the step forward represented by the Ducati 2021?

"I was not too surprised by the bike because this year I have always tried to follow the guys from the factory team. I would say that I knew the bike well from the outside! It is better in many small things, above all it is easier in corner entry and when you are at maximum lean angle, they have worked a lot on this area and in my opinion they have taken a big step forward. I don’t see any negative aspects compared to the 2019 bike, even though I know there are a lot of small things to sort out but this is something that regards the set-up for me rather than the bike, which has already proven to work very well with the other riders this year ".

"I can't say that there is a lot of difference. Only that with the old bike you reached a high level, but when the last 4 tenths were missing it was difficult. This seems to have better potential; I just have to understand how to get the best out of it. I can't say that this is another bike, it remains a Ducati but it has improved in the areas where it needed to improve. I can only congratulate the engineers at Borgo Panigale who have done a great job, for me it is a masterpiece of a motorcycle and the results proved it. They won everything they could win except the riders’ title. "

How did the day go in general?

"A really good day today. The new bike is great, I immediately felt good because it seems easier in all areas, although there are some things to sort out because it's all new and I'll also have to work a little on my riding style to exploit its full potential. It was a good day in the garage too, with the new team that I feel great with. There are more people in the garage and it is easier to do all the work. This year from this point of view it was difficult because my mechanics all had a lot of work to do and often they didn't listen to my comments well. I think this change will be important, I also felt a great energy between us. Really great feedback from everyone and this makes me happy ".

You have made a team from scratch basically, how do you feel?

"I have chosen all the people I know well and they all live near Tavullia, so it will be nice and easier to hang out with them even off the track. I wanted the best team possible and I think I have it, I have an excellent relationship with everyone. My current telemetry guy is the same as I had in Moto2 and for me he is one of the best in the entire paddock. Of course he has to understand a lot of things about MotoGP, which from the point of view of electronics is just another world than Moto2. But he understands the riding style very well of every track and is able to give me a real hand to improve where I can. Then there's David who was Valentino's chief engineer and is a great person. I absolutely wanted that, and now we can work together. "

What sort of work did you do?

"I worked again on ergonomics, on my position. Every test I do I am able to improve from this point of view and it is important because this year I have hardly done any tests. Here I can finally work as I like. In Sepang I will have to work on the race pace, I will do some distance simulations. Here it is too early to do so, tomorrow we will work on other things. There are many small details to sort out before moving on to something else. "

Today Bezzecchi was also on the track for the first time, did you talk to him?

"I spoke a little with Marco today, we lapped a lot and we only met up with each other at lunch. He told me the usual things you say when you make the jump, I know he's working a lot on his position in the saddle and I also know that he's really happy and very energized. "