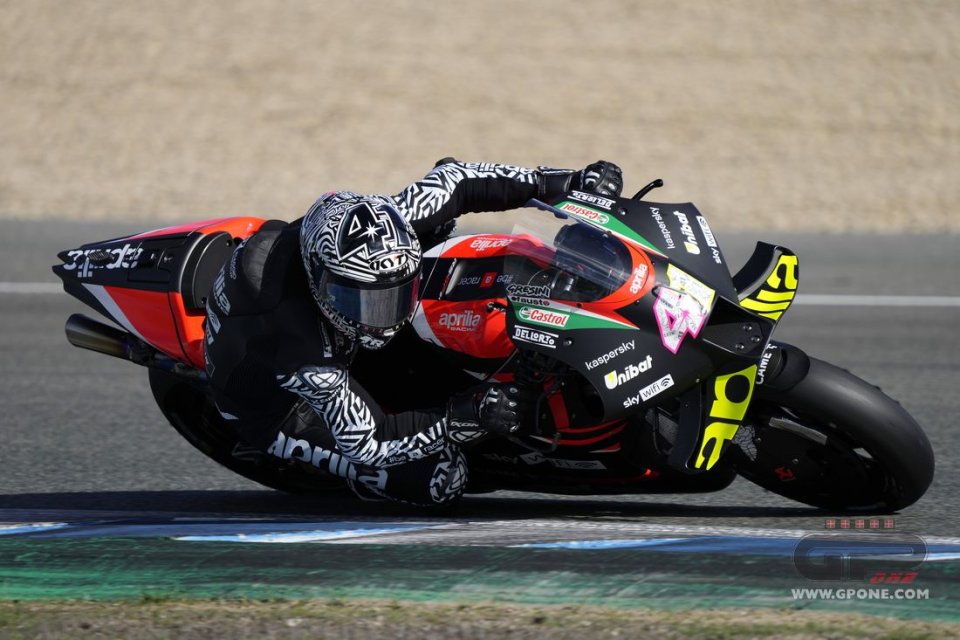 Aprilia has been impressively progressing in 2021, with the RS-GP often showing its full potential, aligned with that of the best bikes on the track, so much so as to give the Noale constructor the first podium of the MotoGP era at Silverstone.  But Aleix Espargarò certainly doesn’t want to settle for just this and, today, he would have liked to do more in Jerez.

There are many new things to test but, apparently, they weren’t able to bring them all here from Noale for the first winter test session, postponing the debut of the best in Sepang during the first  2022 test. A situation that the Spanish rider didn’t particularly like.

“There was a lot of wind today, and it’s always good to ride and learn,” Aleix said. “But you can’t adjust the bike’s set-up based on the wind, because situations like this happen maybe once a year, or more often. But you don’t know when it’ll happen. We have no information on aerodynamics here, by the way. The frame is different, and there are also several new features on the engine but, more than anything else, we’ve worked on reliability. There’s no more power or anything else. I would say it's 99% the bike from Valencia.”

Did you expect to try something new here?
“I hope that something really new will come to Malaysia. I really hope so, even though I would've liked something here already. I know there are so many new things to bring to the track, and it would’ve been nice to have them here, to allow the engineers to work on it all winter before returning to the track at Sepang. I really pray that they'll bring something new. I still want to fight for the podium in 2022.”

You also fell today, and the dynamics were weird once you were in the gravel.
“The gravel is always different on the various tracks, but I’d define it as if it were not the right one, at least here. It’s certainly not like falling on the sand. When I fell today, the bike bounced for a long time and was destroyed. But, in the end, I’m fine. Maybe next time I’ll try to fall on the other guy!”

It seems to be a big problem from a safety aspect as well.
“I’ve talked several times about this problem here in Jerez. They should change it, because there are also big stones here that don’t reduce your speed. It was a fall not at an exaggerated speed, but I destroyed the bike. It happens every year, and I feel like an idiot, because I always fall the same way here. I have just a little pain in my back. Today I also destroyed my helmet in the fall, and I don’t remember the last time something like this happened to me. At least I’m okay.”

What was the cause of the fall?
“One of our weaknesses is that, in fast corners, I can’t use the front brake to adjust the trajectory. It doesn’t take much to go very wide. Turn three is like that. I had too much entry speed and lost the front. Lorenzo also fell at  turn one. The wind was very strong today, and it’s strange because yesterday it wasn’t. The weather was perfect.  I had also talked about it with Maverick, but this morning we ended up like this. In the first twenty minutes, everything was fine, then the strong wind blew. Our bike also becomes difficult with these conditions. The aerodynamics suffer a lot. We lose a lot, especially in the last sector. It becomes difficult to ride.”