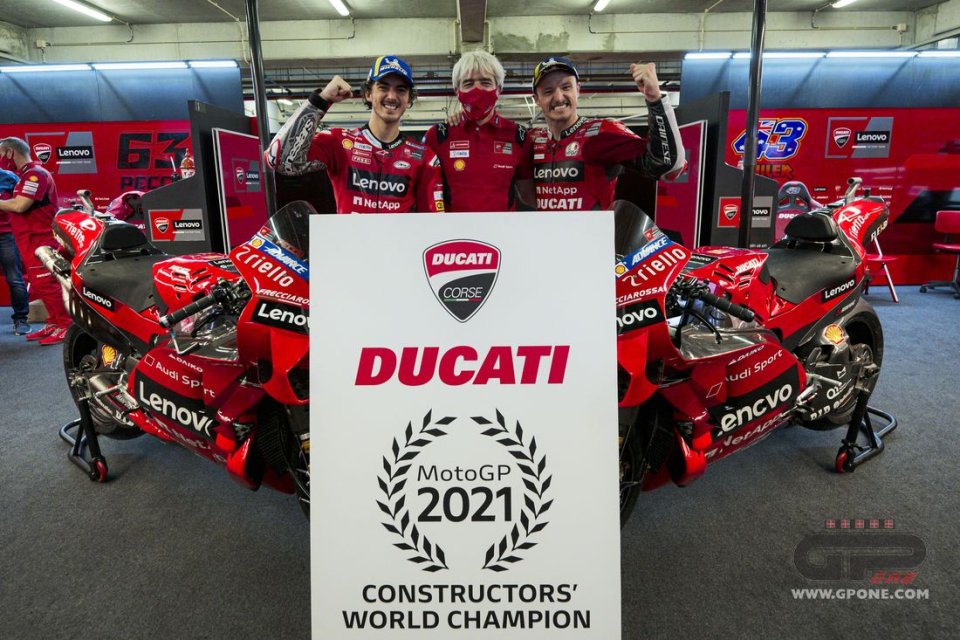 The numbers don't say everything, but they do say a lot. This was the best season ever for Ducati in terms of number of podiums, 24 for 5 different riders, the manufacturer who won the most (7 races), for the first time in MotoGP it put three riders on the podium and in each GP there was at least one Desmosedici in the front row.

"I am happy with the work we have all done together this year" said a satisfied Gigi Dall’Igna, the general manager of the racing Reds. The engineer from the Veneto area arrived at Borgo Panigale in difficult times, but now 'his' bike is the benchmark in the category. “It's true, when I arrived the bike wasn't very competitive, but we have improved year after year - he continued - Now it adapts to different riding styles, we have been competitive in all the races. We are happy, but we have not yet reached the final destination” he smiles.

Any regrets about not having won the Riders’ title?

“You can't have any after a season like this, it will go down in history as one of our best. With hindsight you can do a thousand conspiracies, but they are of very little use. I am happy to have contributed to the growth of a rider and a bike that will be able to fight as protagonists not just next year, but in the next few years. This is the most important thing".

"Bagnaia, Martin and Bastianini did a fantastic job, I expected more continuity from Miller"

Are you talking about Bagnaia, is he the rider who amazed you the most?

“I think both he and Martin and Bastianini have done a fantastic job. Jorge took pole position in his second race, won in his debut season, that’s not easy at all. Pecco was incredible, in the last part of the season he was probably the best rider, he won 4 races out of 6 and it could have been 5 without the crash at Misano. He gets better all the time, when he has reached a very high level he still manages to take a step forward, that's what surprised me the most. Enea had the 2019 bike and even with that he managed to do some brilliant races, in the final stages he was as competitive as the best. He must make progress in practice ”.

"Given his experience, he was the rider called upon to do a little more. However, the job of a rider is not easy and often the goal is not reached due to something banal. Jack won two races, he was often on the podium, but we expected more continuity from him. However, we are convinced that he is a strong rider and that he is not missing anything to fight for something bigger ".

The Ducati now goes well with every rider, whereas before it seemed like a 'rider eater'. Has it become the easiest bike?

“Also in the past we won with different riders, Lorenzo, Petrucci, Iannone, many did well, like Bautista, we haven’t gone well just this season. As always, it's a combination of many things, but my goal has never been to make a bike that would go well with just one rider ”.

But last year the bike seemed to have a thousand problems, now it is almost perfect…

"There is never one single piece that slots the entire puzzle into place. Last year we reached the end of a story (with Dovizioso, ed.) and there was no longer that mutual trust that is important for achieving certain results. This season the relationship between technicians and riders has been rebuilt and vice versa, this has made the difference. The bike has improved and our riders, especially Bagnaia, have taken a step forward ”.

“I haven't talked to him yet, but asking him something right now would not be very smart because I don't know his relationship with Yamaha and if he has any plans with them. It is right to let him decide, he knows that in this world he can do whatever he wants ”.

"Engineering technique is nothing without the right rider"

Does the rider still make a difference in MotoGP?

“He is the real player, I am convinced of that. Engineering technique is nothing if you don't have the right rider ”.

Does seeing your riders change bikes and struggle, however, convince you of the validity of your project?

“Statistically it was like that, but Lorenzo too struggled to adapt to the Ducati, even though he later succeeded. From a human point of view, however, it does not give me any satisfaction, for example I am fond of Petrucci and I was sorry to see him in difficulty. From a professional point of view, however, it is a small clue, but I prefer the hat-trick at Valencia for confirmation ”.

What is still missing with the Desmosedici?

“This season we had some good performances, but also some shortcomings. I'm not happy with turn-in in the fast corners, as was the case in Assen and Qatar, we will try to improve in that area. Turning is a problem that I have had since I arrived and I want to solve it, even though we have improved it year after year. Then, at the end of the day, it is the riders who have to make the difference and this year they succeeded. "

"Eight Ducatis on the track brings more advantages than problems"

“That might seem like a lot, but the advantages are more than the problems. Statistical data is important for development and the more you have the better it is, it allows you to better understand what to do. Managing eight bikes rather than six is just a matter of organization and Ducati has the ability to do so ”.

What will we see in these tests in Jerez?

“Quite normal things, evolutions of parts that we had already tried and put aside to develop them more calmly. We will also have the 2022 engine, which will be completely new and not yet in its final version. Bagnaia and Miller will have one each, while the Pramac team will have one which the two riders will share ”.

"Stoner as coach? Too difficult to achieve"

There has been a lot of talk about having Stoner as a coach, is that just a pipedream?

"It is very complicated to start a collaboration with a person who lives and has his own family on the other side of the world. I'm pragmatic, it's too difficult to achieve ”.

Are you already thinking about the new MotoE made in Ducati?

“It's something new and I think it will be a good story to write. An engineer has so many things to have fun with, I can't wait to work on them ".

Tardozzi: "Gigi was worried, but we trusted our riders"