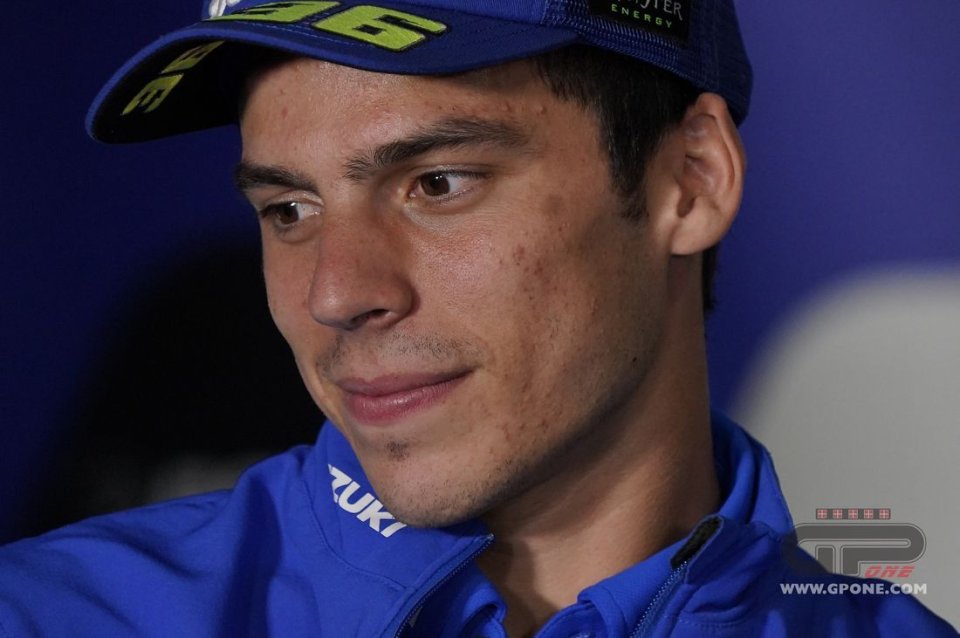 The last race of the season at the Valencia circuit left a bitter taste in the mouth for Suzuki. In the morning Joan Mir dictated the pace in the warm-up, and for a good part of the race the two Spanish riders kept the pace high in the leading group surrounded by Ducatis. Then the crash by Rins and an overtaking move by Miller definitively ended the possibility for Joan Mir to finish the season on a high note, and he finished the race just off the podium. The frustration was visible for both riders, who will now face the next tests at Jerez with the aim of stemming the tidal wave of Ducatis that they will have to fight against next season.

"I am very disappointed, after this morning I did not expect this result - Joan Mir told us - I thought this was our day, even the practice sessions during the weekend had gone well, but in the end, there was nothing we could do. I had some grip problems with the front and at the same time I didn't have any advantage I could leverage to fight the Ducatis. It's a frustrating situation. "

What do you think was the strength of the Ducatis in this race? Do you think that without that front problem you would have been able to cope with them?

"In the morning I had an excellent pace, unfortunately I found myself on my own in the middle of the Ducatis, and with no possibility of making up ground on them. I started the race well, overtaking Bagnaia too, but then they got me back. Once I was overtaken by Miller, I realized that by now the race was over. Last year I could still see some weak points, now despite all that power that previously at the end of the race forced them to manage the tyres that wore out more quickly, and therefore to be more careful when cornering, all this does not happen anymore. On the contrary, it seems that instead of losing performance they gain in the last stages of the race, the opposite happens to me as is logical, I cannot understand why and it worries me. I am able to ride and be fast with different riding styles but I don't see any weak points to exploit, we just have to work hard in the next tests ".

So to keep up with the Ducatis you had to push hard on the front?

"Exactly, but the problem is that I was not racing against a single Ducati, there were Ducatis everywhere I looked. Normally when you chase someone you wear the front more, they don't seem to have this problem. The curious thing is that if you make a comparison between the race times of this year's race and those of last season 2020, in which I won, in the first race we were 20-25 seconds slower than I did today, and in the second Morbidelli won ahead of Miller, and I still finished 2 seconds after what I did today. Basically Ducati have gained 15 seconds from last year, if you analyse it they have made an incredible leap forward. "

Do you think this advantage of Ducati is due to the fact that the Suzuki has to make up for the time they gain on the straights?

"I don't know if I brake better than them, but in this race I lost a lot at the top of the corners, the only thing I could have done in this race would have been to crash or finish fourth. I risked crashing several times, that's very frustrating, but I must also say that the atmosphere in the pits is good, the improvements resulting from the work in Suzuki are clear, I strongly believe in the project and the next tests will be fundamental, but as a rider I cannot not say that I am disappointed about this result ".

Looking at this season as a whole, not having won any races must have been a shock for you as a rider as much as for the team, it seems Ducati have cut a lot of your strengths. Will we see a more competitive Suzuki next season?

"What I can say is that I probably haven't been able to get 100% out of this bike, but I think I've given my best all season. I know there are those who say that I didn't defend the title worthily, but you have to live in certain situations before you can point the finger. The frustration is not only mine as a rider, but also for the whole Suzuki team, but I also believe that this season we will all come out stronger. You have to give 120% to be able to win the title, and this also applies to me as a rider ".

You said you didn't find any weak points in the Ducati during this race, were you referring to the bike in a strictly technical sense or more generally?

"No, obviously I was talking about the Ducati package in general, we are talking about riders of the highest level and of whom I have great esteem, this is out of the question".

What do you think is the key area you will work on in the next tests in order to better face the next season?

"The most important thing in the next tests will not be to be fast, but to ride as much as possible, and try different solutions. We will try to collect as much data as possible thanks to the two Suzuki testers, they too have several tests to carry out. Fortunately for us in the next tests we will have so many new things to work on, beyond the technical details of the bike. This race was important but the next tests will be even more so now that engine development will be possible again, I think we will have a good margin of improvement going towards next season ".

A season finale to forget also for Alex Rins, who after having stood out in the early laps in the leading group, crashed and ended a difficult year on a negative note.

"It's a real shame to end the season like this - Alex Rins declared - I had a good pace, I missed the line and I knew I would crash, but it wasn't easy among those Ducatis. Now we have to face these tests with even more determination ".

What do you expect from the next tests?

"Personally, I would like even more power compared to the Misano tests, obviously this will involve changes in all other sectors, from electronics to aerodynamics."

Crashes were a big obstacle to you this season, is that something you will work on this winter?

"We analysed the data from the crash in the pits, the brake pressure was right, but the trajectory was wrong with respect to the angle of the bike, it will certainly be something else that I will continue to work on."